Hey, hey how 'bout some good ole kicks on Route 66 today? Whaddaya say? In the Western suburb of Willowbrook along the old Route 66 sits a legendary eatery that first got started in the late 30's. The Chicken Basket started off as a lunch counter at the local gas station and the fried chicken phenomenon began when two ladies overheard the owner of the counter talking about serving more food at his place. They approached him and said they would teach him how to fry their secret chicken recipe if he would buy the chickens from them. It all took off from there and eventually the business outgrew the counter and the car repair spaces were turned into a dining room. With it's location on Route 66 business was really booming and they opened up a much larger spot where it stands today in 1946 right next door to it's original location. 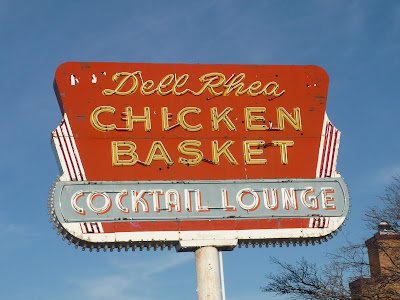 There was a time when the Basket was a boomtown of sorts. They had a Blue Bird Bus Stop terminal for people traveling as far away as LA with the old Hinsdale airport across the street you could see planes coming and going and there was always entertainment going on inside and outside of the restaurant. The Chicken Basket was it's peak when Route 66 was as well. Sometime in the early 1960's Route 66 bypassed the Basket and the Route 66 icon would fall on hard times. People had trouble finding the place and the area around it was empty. It was 1963 when Dell Rhea and his wife Grace bought the Basket at a bargain price. Since Dell was well known around the area he used his popularity to bring people back and it's been pretty good ever since. While at first the fact it was no longer on Route 66 hurt it actually ended up helping that it's now located on historic Route 66 which attracts lots of interest from travelers these days. It's been featured in too many publications to name and been on quite a few food shows including Diners, Drive In's and Dives. In 2006 it was named to the National Register of Historic Places. 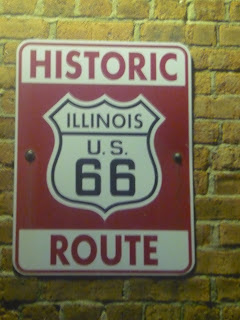 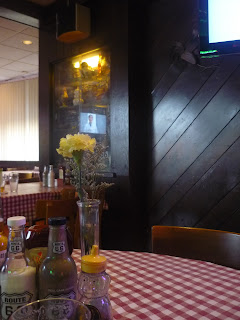 View from the table

Today the Basket is a pretty big place. I don't know the exact amount of people it can hold but the number is up there. Just like back in the day it's a very popular stop for lunch and dinner for travelers coming to and from Chicago. If your taking the highway Dell Rhea's has it's own sign on the exits under food. I've been to the basket a few times and always enjoy my visits there. I tend to sit at the bar when I do go and am always given first class service with nice prices on booze and everyone in there is very freindly. It almost feels like the 50's inside there. It definitely takes you back to another time. The menu is big and they hold a lunch buffet every Tues-Fri from 11:30a to 2:30p. It includes all you can eat fried chicken along with soup and salad bars and sides. I've never had it but I have seen it while dining in and for under $10 it's a bargain. On my last visit it was a Tuesday and that's fried chicken special night. A four piece basket is $8.95 and that includes biscuit and fries. I'm also a fan of Dell's onion rings, these bad boys are big. You'll see below they don't cut the rings thin and in some cases they arent even rings, they're rocks. 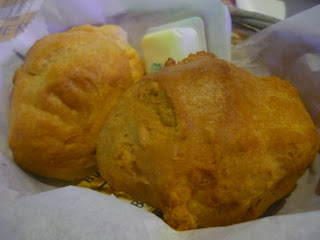 Biscuits baked in house from Dell's 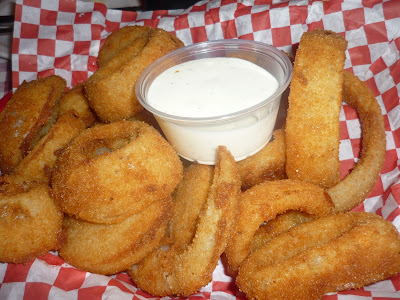 A basket of homemade onion rings from the Chicken Basket 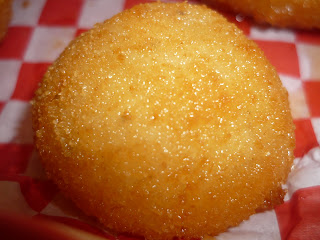 An onion rock...that's all onion inside

Dell Rhea's has always been known for their chicken and they've done a good job keeping it that way. They still use the same recipe that they've always been using and the birds they use are some of the biggest chickens I've seen from anywhere. I always get fully stuffed after a chicken dinner from Dell Rhea's. The main difference in the fried chicken at the Chicken Basket is that they use bread crumbs in the batter and not a flour based mixture like most other places do. The result is maybe a little more grease than the other spots but the flavor is there and that's what matters to me. Plus the skin is scrumptious and that's the best part so I aint complaining. The Tuesday night special is well worth it if you take the ride during the summer months and enjoy a night on old Route 66. 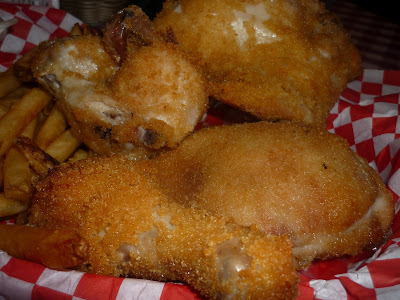 You know what though? The fried chicken isn't my favorite. I love the chicken fried chicken sandwich, maybe even more so than Chick Fil A. Whenever I get a taste for a fresh battered fried chicken breast laid onto a bun with some mayo and pickles this is the place that pops into my mind. it used to be the Fil A but things change and they did the day I found this sandwich. I'm not a big chicken sandwich guy but I do like them and when you need one you want one. Dell Rhea's gets my endorsement for the best fried chicken sandwich in town. Great food paired with top notch service and a classic ambiance all around make Dell Rhea's a darn good establishment. 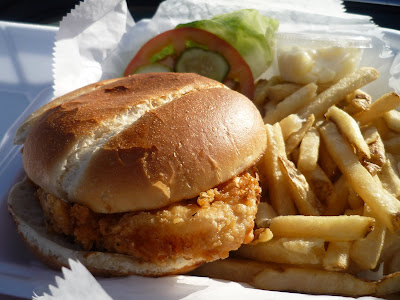