-Got Beef? Italian Beef
as seen on 'What's Your Beef?'

I had to take a little break from the Beef Bus since I was back and forth some places this summer and time didn't allow me to jump on it and ride. Well were riding again and today we head out to the Southwest suburbs to Orland Park to taste Turk's Italian Beef & Sausage. I actually went here last winter and have a just been backlogged in posts. However like always I recorded the score in my cell phone and saved it so there would be no forgetting. So with that, welcome back. You can expect a monthly flow of posts over at What's Your Beef? on this country's greatest regional sandwich variation. 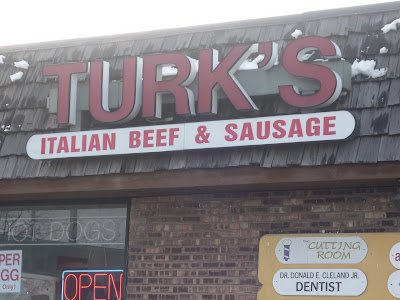 Located in the Chicago suburb of Orland Park, IL

I had been told about Turk's from various family members and other friends who live or lived out in the area and I got to try it when I was out there with one of them. Turk's has a pretty good reputation and is one of the favorites of the locals so I had some nice hop that it would be another better than good beef to be found out South. I went with my usual of a beef with hot and dove right in to what was a heavily stuffed beef sandwich bigger than most spots. I could see why this is a neighborhood favorite and I enjoyed my beef with hot and would easily have been back if I was from the area. The only thing that I thought was average about it was the gravy which wasn't as flavorful as some other stands around Chicagoland. The beef was thinly sliced and dissolved on your tongue while the hot peppers and bread were also above average and nice. 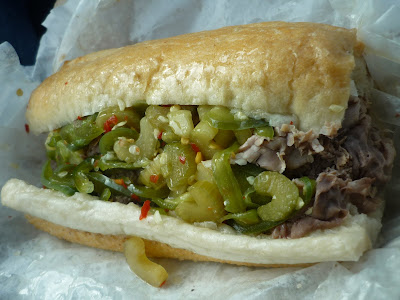 Beef with hot from Turk's