If you've ever spent the evening pissing the night away downtown then you might be familiar with the latest addition to "The Sammy's of Chi". Mister J's located on State St. just off Chicago ave. is a staple in people from all walks of life's diets. Maybe your a 3rd year law student at Loyola law school located just across the street? maybe you spend your Friday and Saturday nights waiting in line at some garbage club that ends in bar? (smart, sound, spy, schmuck etc...) maybe you've been drinking all night in the Viagra triangle with your mistress and don't want what your wife has waiting in the fridge back home in da burbs? maybe you've been begging for change all night by the McDonald's on State and Chicago and finally got enough for a cheap greasy meal for dinner and a rock for dessert but don't like the McChicken anymore...then you probably eat at Mister J's. 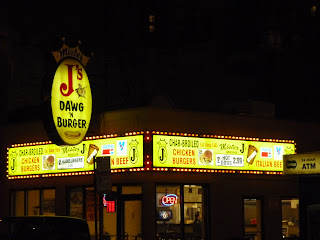 Mister J's is one of those places that's best visited at the end of your night. Everyone has a favorite on the menu such as the Chicago style dogs, burgers and gyros. The wall is filled with different combination value meals and I guess they've been doing it like that since the 70's. That would mean that they were on the combo meals before McDonald's and BK even thought about them. There's nothing fancy or even appealing about J's but the char grilled food is better than anything your going to find in the same price range in the area of the Magnificent Mile which is flooded with chains. Your not going to find friendly service or a spotless shiny dining area but you will find one hell of a char grilled chicken sandwich. 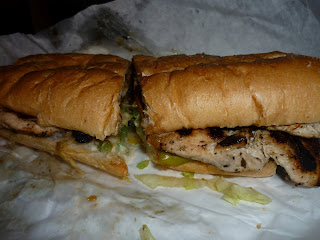 On those nights when I'm either near the downtown area or not feeling like Mexican, every now and then find myself in line with the rest at J's. The chicken sandwich is a piece of fresh (not frozen) breast meat that's been marinating in a lemon juice and is char grilled to perfection and served on French bread with your choice of Chicago style hot dog toppings. I will always go for a chicken sandwich with cheese on French with everything and it never disappoints. Not only is this place way better than the McDonald's down the street but its also cheaper. Huh go figure. On my last visit to J's I got another Chicago food favorite: the pizza puff. The history of the puff is a little sketchy but anyone who grew up in Chicago can tell you about the pizza puffs available at grease shacks around town. My loyal readers who have been asking "whens the puff report coming?" will be happy to know the puff report is coming soon. Mister J's fries up a nice puff, not any different than anywhere else since they all come from the same factory but a nice eat at 3a after a long night of Jameson. Mister J's is open 'til 2a Sun.-Thurs. and until 4a on Friday and Saturday. Be prepared for good drunk food and something weird to happen. 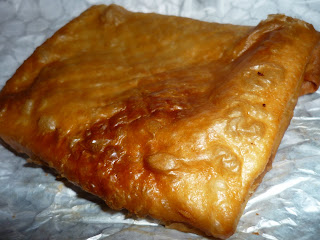 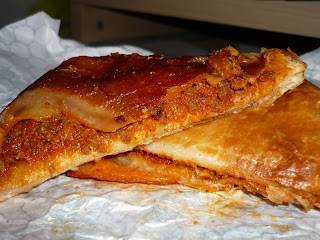 story on the history of pizza puffs coming soon 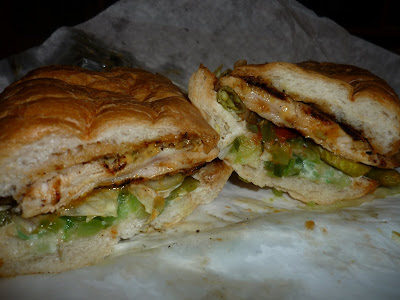 objects in picture are tastier than they appear

are those pizza puffs il taco?

In El Paso, TX where I'm from we have an 82% Hispanic population. (I'm one of them.) A favorite hangout after late night partying is the Lucky Cafe on Alameda (seriously questionable part of town). There we enjoy menudo, bolillos and lots of "cafe". There's nothing like having a favorite spot to go to at 2 in the morning.

Wow I could really use a good Chicago Dog and A cold one right now. My husband and I used to sell crafts at the Halstead Street fair and a show on Belmont st.
Miss those Dogs.