Its back to the steak taco scoreboard and today's participant is Zacatacos. Named as some of the best tacos de carne asada in the city by the Chicago Tribune back in 2006 this was my first visit to their biggest outlet which is the location on Pulaski. While most of their locations are small little taquerias with a small grill offering tacos and not much else this location has an expansive menu. It really has the feel of a little Mexican diner with the counter with seats at the grill and tables for diners to sit at scattered about in the front. The menu has all the traditional Mexican favorites including breakfast and a al pastor spit they put to use along with the highly acclaimed steak tacos. If your driving down Pulaski on a weekend day with your windows down then you'll be sure to get a whiff of the steak coming from clouds of smoke out the chimney. 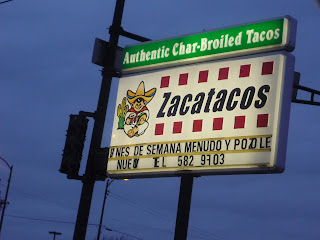 Zacatacos started out as a small little taqueria in a neighborhood heavily populated with Mexicans and now has multiple locations dispersed around Chicagoland that are all very popular with their neighbors. In fact its just one of the many family owned establishments in Chicago that went from a small little taco stand to a little empire with multiple locations. Its truly amazing just how many Mexican restaurants this city has and I will still put money down that Chicago has the most Mexican restaurants of any city in the world other than Mexico City. Zaca's is a great example because they keep growing and new locations pop up next to other Mexican restaurants that are 2nd, 3rd etc. locations of an original somewhere else in the city. I was skeptical of the tacos really being that good if named by the tribune. I'm always a little cautious when a major publication that gets so many food suggestions wrong is going to name something they don't know much about the best. I did however find that Chicago Magazines best steak taco in the city really was one of the best so its not always the case that those prints are wrong. On this particular trip I had just gotten done eating somewhere else in the area so I stuck with the most popular menu item the steak tacos. 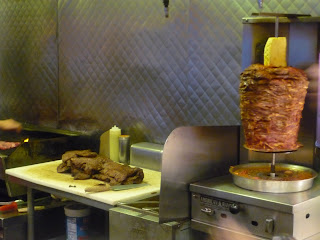 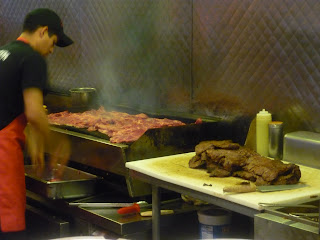 Grillmaster preparing for the weekend rush 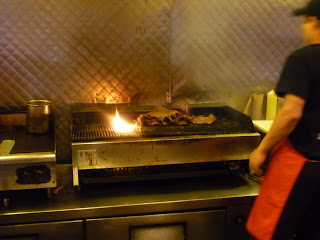 real steak tacos must be made with fire

On my first visit the place was packed with people and there was a wait for seating and the grill man was a very busy man that day. The smell of the steak is what drew us into the parking lot and that enough was a pretty good sign of what was to come but an even better sign was the happenings at the grill as you can see above. I opted to just take out the tacos since there was a wait and no open seats and eat them on the hood of the car on a somewhat tame winter day. the steak taco-thon is only for places serving real tacos de carne asada (char grilled skirt steak) and the toppings for a real steak taco are onions and cilantro only with some salsa verde on top. The simplicity and combo of flavors is what makes real steak tacos to die for and one of many favorite eats on earth. I wouldn't call the tacos at Zacatacos best in city but I know for sure that they would be "best in city" in almost every other city in this country. That's how rich we are in Mexican food here in Chicago. Nothing was bad about the version served at Zacatacos but I thought they just weren't as juicy as other spots have been. It was still a tasty taco and the salsa was great and toppings fresh. I would recommend any of the Zacatacos locations should you be by one. 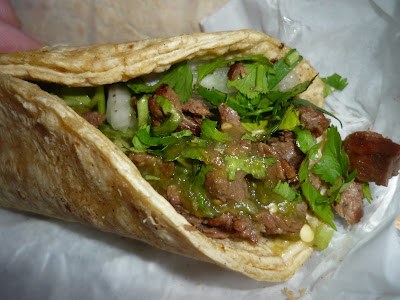 May I ask you King, which steak taco was the best in Chicago?