The Cubs are in Milwaukee for the second series of the season this Easter weekend with the ESPN game of the week on Sunday night. This means that the Cubs fans are going to be taking a road trip and coming to Milwaukee from all over the Midwest as is normal for the summer months when the Cubs go up to Wrigley Field North. As summer gets closer you can expect a whole bunch of spots to eat at in the great eating state of Wisconsin along with other US states right here. Kenosha Wisconsin is one of the first stops after you cross the IL/WI border and has always been one of Chicago's best suburbs to eat in. Yea I said it, Kenosha is as much of a suburb as are some of the other places in Chicagoland that they call suburbs. Its much closer to me than alot of others and therefore its one of my favorite places to eat and spend a day or two over the summer and its a quick one hour drive max. Despite being so close and just a quick drive up the lake its a different world out there and like most little towns in Wisconsin, Kenosha has more than its fair share of places to get the good stuff. 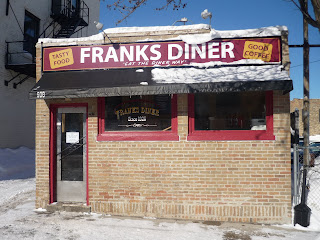 The little diner that could

Franks diner is one of the gems of the area and is also a favorite of anyone who's from Kenosha, been thru Kenosha or spends time in the area. This is the spot to go if you want to eat a hearty breakfast en route to Milwaukee. Its locally recognized as a historic landmark and the spot in town for breakfast and it has now grown into a celebrity on the US diner scene. It all started in 1926 when six horses pulled into Kenosha and dropped Franks diner where it is today. The website tells the story that "Anthony Franks, who first learned of the unique restaurant opportunity through a magazine article, paid $7,500 plus $325 in shipping charges to launch his business. He added a dining room in 1935 and a larger kitchen in the mid 1940s. The Franks family operated Franks Diner until 2001." Lucky for the people of Kenosha the people that have taken over haven't switched anything. With a recent appearance on Diner's, Drive In's and Dives along with all the other press it has become very busy on almost all days at all times they are open. 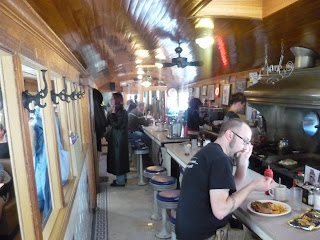 The view upon entering 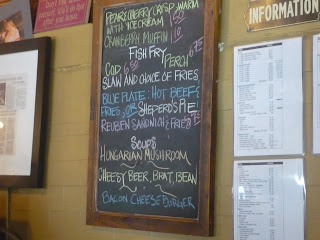 The specials board is pure Wisconsin

Franks does up a great breakfast and lunch menu and most everything is going to be better than good. They do however have a signature menu item which is called a "garbage plate" It consists of hash browns, green peppers, onions, jalapenos, eggs, choice of meat (ham, bacon, sausage or why not all three?) or you vegans can go all vegged out and get Zucchini, mushrooms and tomato included with the rest minus the meat. Its all served with toast and a full garbage plate consists of five eggs while a half contains three. Want cheese? this is Wisconsin of course you have the option. The massive plates of food are a sure fire way to make sure your belly is ready to soak up all the beer at the baseball games. One of the finest and funnest breakfasts in the country is a great way to start your day in Wisconsin no matter what your plan is. Just be sure that if your plan includes active activity that you get either a half plate or even split a half plate. Yes they are that big that a half of a garbage plate split between two big eaters was enough to start a day of binge eating. 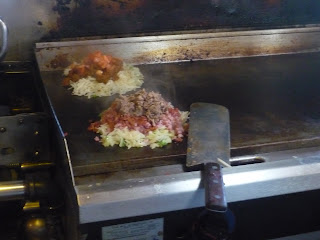 The grill on a rare slow day (garbage plates being made) 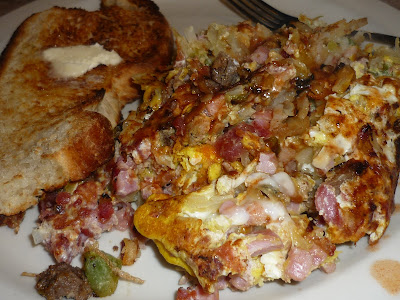 After you get yourself some breakfast at Frank's be sure to stop at Olivers bakery for some post game snacks or just a few treats to have in your car for your roadtrip or bring back home with you. Whatever the reason is you'll be so glad you did. I'm not a big sweets guy but one of my favorite sweet pastry type snacks is another Wisconsin specialty brought by the Danish to Racine Wisconsin. Kringle is dough that has been rested overnight before shaping, filling, and baking. Many layers of the flaky dough are layered, then shaped in an oval. After filling with fruit, nut, or other flavor combination, the pastry is baked and iced. I always drive by Oliver's when I'm taking one of my favorite drives in the country, get on Sheridan Road at Fullerton and take it all the way to Milwaukee along the lake. It wasn't until my last trip there this past winter that I finally stopped in. 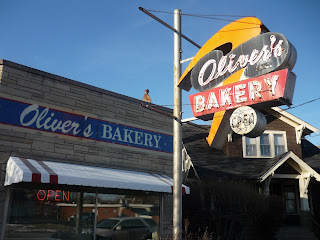 Olivers bakery in Kenosha is a real gemmer

Call ahead and Olivers will have any one of their 20+ flavors of Kringle ready for you to be picked up. Just don't make the mistake of taking a pass on the donuts and cookies which also happen to be incredible on every level. The donuts were the best I have ever had and I don't think I need to even bother eating donuts from anywhere else. I'm not big on sweets so I am by no means an expert but I know that the Boston Cremes and Bismarck's were out of this world. There is also a cookie case and a refrigerated case with all sorts of cakes and pies. This is what a bakery should be and if there was anything this good in Chicago my body would be paying for it dearly. Its now in my regular rotation for good eats in a little town that has a many great eats. 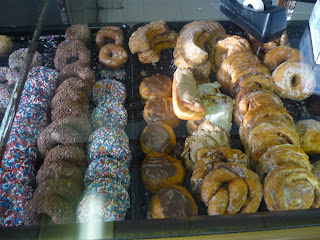 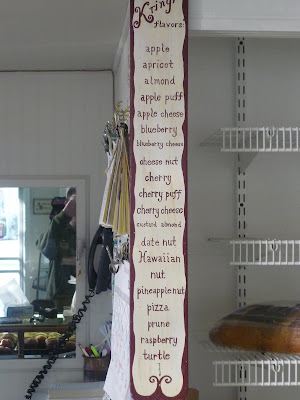 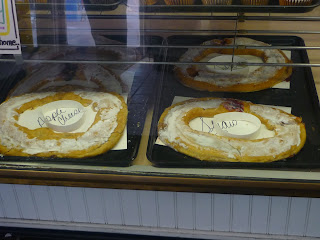 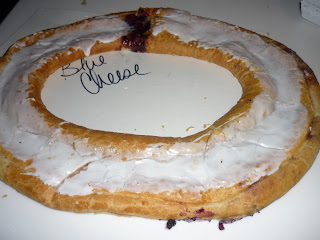 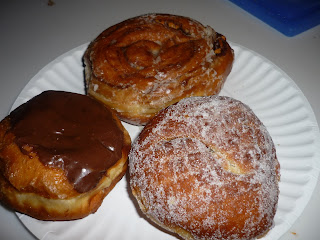 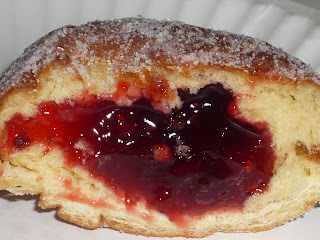 Do not forget to have a few brats from the Brat Stop right off I-94 before or after the game this summer. Its always filled with people at night and you can meet some real characters and have one of the best pieces of encased meat in the world along with a cold spotted cow. 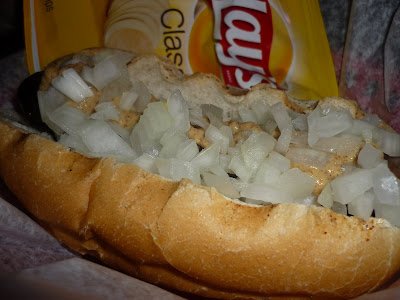 Other options for food in Milwaukee are classic corned beef and Friday fish fry from McBob's and or cracker crisp classic tavern style super thin crust pizza from Zaffiro's.

Nice! I grew up in Kenosha. I live 4 blocks from Oliver's for 10 years. Kenosha is rich in foor culture, I agree. Pizza, Kenosha Pizza! I'm sure you have stopped in at Tenuta's Italian grocery? right?

Oh Yes Tenutas and the rest of the Italian gems around town will be documented this summer. I get out there often in summer months. Whats your favorite pizza joint? I'll try it out.