The next step that Indian food is taking here in the States has to be one of the most exciting things in the food and drink industry right now. That next step would be it's rise in popularity and the next generation of South Asian chefs that are taking that step. Indian food isn't new and it's by no means a trend. But it's always been hidden in the back so to say. You could always find Indian food in places like Chicago but it was always found wherever the local South Asian communities could be found. Around here that was and still is up north by Devon. But you can also find exciting Indian restaurants in food halls downtown and in the case of Wazwan in hip neighborhoods like Wicker Park. 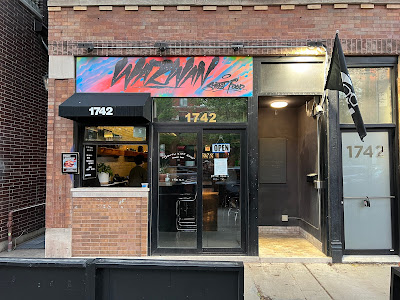 Newly Opened in Wicker Park
I don't mean to imply that Devon avenue isn't cool, it's awesome. What I'm saying is there was a time when Indian food was mostly takeout and the decor at most of these places was low key. But over the last five years Indian food has started to become much more common and not just for takeout. Spots like Wazwan, ran by first generation chefs, are popping up not just here but everywhere. The story of Wazwan is one that begins with a fried chicken sandwich but truth be told I've never tried that fried chicken sandwich. I hear it's great and I'm sure it is but my first taste of Wazwan came from it's current iteration and the chicken sandwich has never been as tempting as other options. For example the Nihari Momo are an amazing appetizer that really signifies what this spot is all about. Momo are Nepali style dumplings and Nihari is a very popular style of beef stew and the two of them together make for the city's most unique set of dumplings aka stew dumplings. Top stuff in taste and texture. 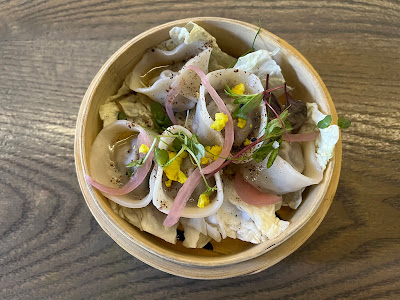 Nihari Momo at Wazwan
Even though with each passing day I grow north of 40 I'm still finding new things to love. You can eat a lifetime of sandwiches and still not try them all, or can you? Well I've recently fell for the Vada Pav which is one of India's most popular snacks. It's most popular in Mumbai but they're found all over and almost everyone in India has a go-to spot for this sandwich which consists of a deep fried potato dumpling placed inside a bread bun. Where it goes from there is totally up in the air but generally speaking they come with one or more chutneys and maybe some green chili pepper. Wazwan has them (two per order) as an appetizer and I've noticed how they're dressed differs by visit but as of my last visit they came with two chutneys and a sliced tomato on a toasted bun. An excellent rendition. 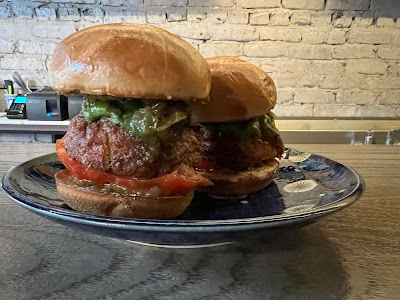 While the menu doesn't seem to be geared to one specific region of South Asian cuisine it's still regional on a dish by dish basis. If you like Filipino flavors they currently offer a dynamite rendition of a dish called Inoloban. It's a fish stew of sorts with both clams and snapper sitting with rice noodles in a coconut turmeric broth. It's really good but lately we've found ourselves in love with the mushroom korma which skips no beats without the meat. Korma being another popular South Asian dish which consists of meat or vegetables braised with yogurt, stock, and spices to produce a thick sauce or gravy. The mushrooms take on all those flavors and work as good if not better than lamb or chicken and the likes. Wazwan has a backdoor patio and a front one coming soon. They're BYOB for now and also offer a highly touted tasting menu at 'The Coach House by Wazwan' that I'm looking forward to. 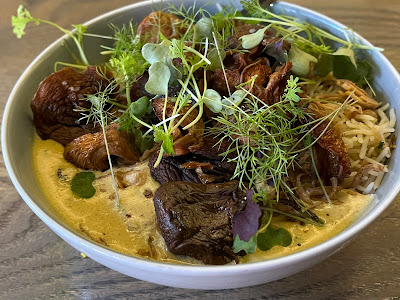