We don't go out for cocktails as much as we used to but when we do I like to visit spots like Bar Kumiko. The price of cocktails has gone up greatly since they first started making their massive comeback. $18 drinks aren't just in New York City anymore but instead they're the standard. They certainly add up when you have a few so you might as well enjoy them at the spots you know are going to bring it and Bar Kumiko on Lake street in the West Loop is one of the best anywhere. 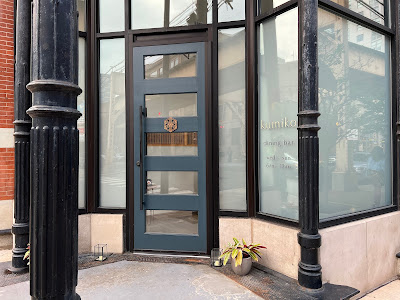 Worlds Favorite in the West Loop
Bar Kumiko first opened in 2018 and ever since then it's been considered one of the countrys, actually one of the worlds, best cocktail bars. They focus on Japanese spirits which includes lots of sake and whiskey but their catalog goes much deeper than that. It's also a dining bar in that the food gets the same high end treatment as the drinks with a small menu of Japanese classics taken to the next level by the team which includes Chef Noah Sandoval of Oriole. Kumiko is ran by his business partner and expert mixologist Julia Momose. Together with the rest of their team they've created one of the city's best drinking and dining experiences. This would be our second visit but our first in three years. We were able to walk in around opening (6p) on a Sunday night and get seated at the bar. 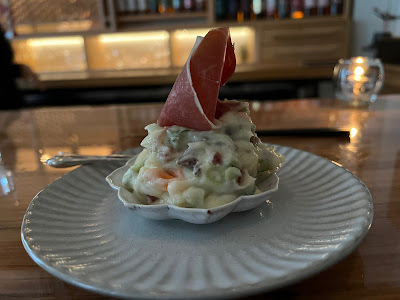 Starting off with the aforementioned drinks I found one right up my alley listed under the signature cocktails. The 'Cloud Hopper' was calling my name. It's made with a rice shochu which is a popular spirit right now in the bar industry and it also has mezcal, passionfruit, green cardamon, oak milk and yakult plus lemon mixed in. It's the best cocktail I've had in a few years though as I mentioned already we don't go out for them as much. But when we do Kumiko is the type is spot we like to check out bc you know the drinks are going to be made with an expertise that most other spots have a tough time matching. But what about the food? Well we started with an order of the potato salad which if you didn't know is really popular in Japan. There's no one way to make it over there, each spot has it's own recipe and at Kumiko the use of smoked ham makes it the most extravagant version I've tried. 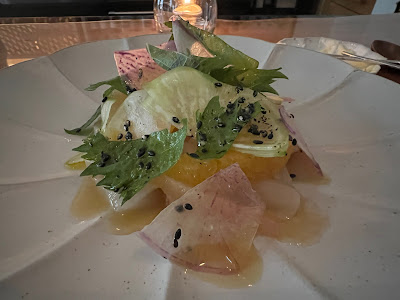 Scallop Salad - Hokkaido Diver Scallops, brown butter, California citrus, daikon, ponzu, sesame
Next up out of the kitchen was a perfectly put together scallop salad that hit all the notes as far as a refreshing summer dish goes. It had really flavorful chunks of citrus mixed in with ponzu and sesame which are all flavors I really enjoy plus brown butter on top of all that. The scallops were perfectly cooked with the slightest of a sear which is all they needed as they were extra fresh and tender. 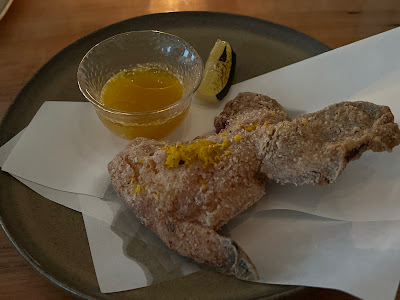 Cod Wing - charred lemon, house ponzu, yuzu zest
The best savory item of the night was probably a pristinely fried cod wing. When fried, the wings and collars of large fish such as cod become the chicken wings of the sea. I've had lots of delicious plates of fish collar over the years and I thought I preferred it grilled or even better broiled but now I'm thinking fried might be the way to go. The breading was crisp and full of flavor while the meat inside was as tender as cooked fish can get with the housemade ponzu sauce taking it all over the top. 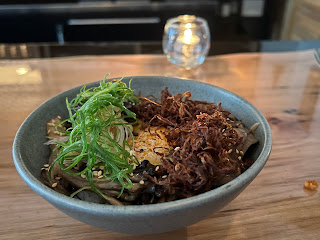 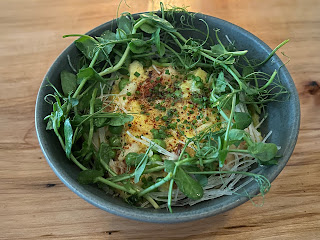 Maitakédon (top) - Kanitamadon (bottom)
We tried both of the donburi on the current menu. Donburi being the Japanese term for rice bowl. What goes on top decides what kind of donburi you're having (Ex. Tendon means Tempura Donburi). They currently have a mushroom donburi which is made up of marinated mushroom, caramelized onion, onsen tamago, crispy onions, gari, and scallion. It was pretty good but I thought the grilled onions were a bit overpowering in a way that made the dish uneven. It wasn't as well balanced as I’m used to when it comes to Japanese food. We had better luck with the Kanitamadon which was on special (not listed online) and made up of dungeness crab, shirodashi, tamago, kani miso mayo, espellette, greens. 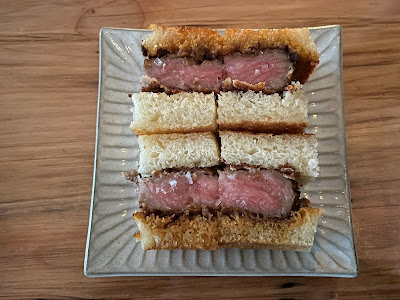 Wagyu Katsu Sandwich - A5 Miyazaki wagyū, beef taré, truffle honey, toasted in beef fat
We knew we were going for the week leading up to my bday (the reason we were there) and I went back and forth with what I would order leading up to our visit. It wasn't until the day before I decided that I was going to get what's likely the most expensive sandwich in the city bc why the hell not. It's a katsu steak sandwich made with A5 Wagyu which is some of the best beef money can buy in these parts. I don't eat a ton of steak these days and when I do it's usually in my own or someone else's yard and not at a restaurant but this was something I'm not fully capable of putting together in my own kitchen in part bc I have no idea where to score the beef. But with a pricetag that's close to $100 (with tax) the first question most people are going to ask isn't "is it good?" but rather "is it worth it?" and I don't think I can answer that bc it's different for each individual. But the question I can answer is "would you get it again?" and honestly I don't think so. Don't get me wrong it was good but like most cuts of steak that haven't been sliced thin it didn't make for a great sandwich stuffer. I ended up eating the beef and bun separately after my first piece. It would've been better served as an app for four instead of just for me. I didn't think the truffle component was necessary as it overpowered the beef. That said the dessert which is the only option on the menu is a stunner. Along with the cocktail it was my favorite part of the meal. It's been on the menu since day one which is all you need to know. 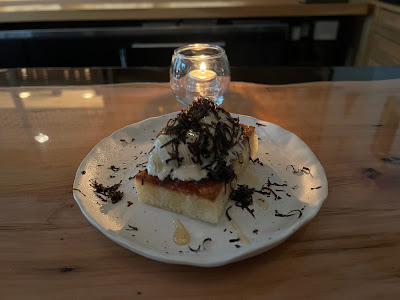