It's that time of year where patio dining is just about perfect (neither too hot or too cold). There's some great patios found throughout town and one of my favorites happens to be a short walk from home. 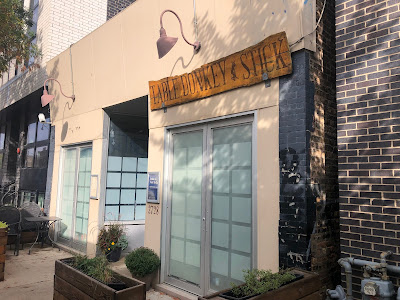 Since it's opening around the end of 2012 Table, Donkey and Stick has become one of the best restaurants in one of Chicago's best dining neighborhoods. The food can best be described as food from Europe's Alpine Region which isn't a common offering around town. The menu changes with the seasons and over the years I've always enjoyed visiting right around this time. They have a cozy back patio (with a fireplace when the temp drops) that transports you far away from Armitage. It has the feel of a meal one would take in on a European vacation. The inside is extra cozy too. Lots of chill vibes. 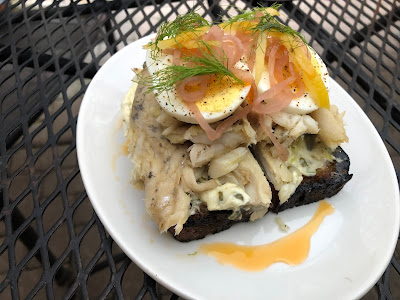 Olive Oil Poached Mackerel
On a recent visit to TDS I was really happy to see not one but two Oktoberfest beers on offer. Shame on any spots that do a curated beer list but don't include an Oktoberfest option this time of the year, there's lots of them. We started out with an order of Mackerel poached in olive oil sitting on top of a slice of sunflower oat toast. There was pickled shallot and a medium boiled egg on top and it was all engulfed in a caper aioli and preserved lemon. Kind of like a Dutch leaning smorrebrod. One menu item that's stuck around for a while is their delicious potato latkes served with a horseradish aioli. 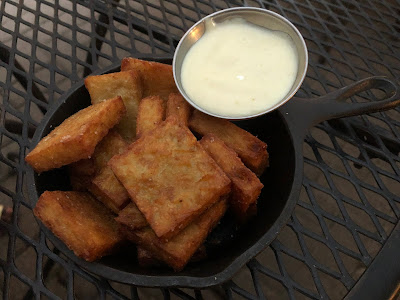 Potato Latkes at Table, Donkey and Stick
My wife went with the fish offering which was a well made plate of trout that's since been replaced with an artic char prep. She enjoyed but we both wondered if we should have tried the pork schnitzel that kept coming out of the kitchen. We ran into my sister and bro-in-law as we were leaving and he said the pork was really good. I imagine we'll be stopping by for the lemon sauced schnitzel soon. 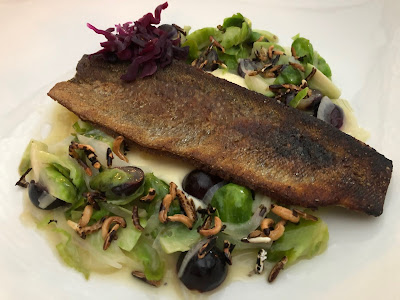 Plate of Lake Trout
Despite numerous trips to TDS I'd never tried their much lauded burger until recently. It was named the best in the city by Nick K. over at the Tribune. I'm not a big fan of pretzel buns but I still wanted to see what was up with it. TDS sources their beef from CDK Farms outside of Idaho and it's some high quality stuff. My only complaint as with all pretzel buns is the patty slips a bit when trying to eat it. So it's a bit messier than most but it's also better than most. The addition of smoked onion, schmaltz aioli, butterkase cheese, house pickles all add to the fact on the messy and delicious front. I'm not going to call it the best burger in town but it gave me exactly what I wanted when I decided I had a taste for a burger earlier in the day. It's really well put together and if you're a pretzel bun fan it's a masterpiece. 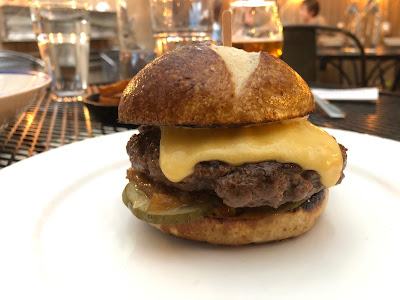 The Table, Donkey and Stick Burger

Don't sleep on dessert which is really good right now in the form of fresh fried ricotta donuts served with corn ice cream and apple jam. I've never visited the Alpine region but I hope to get out there one day. In the meantime it's great to have TDS so close to home. It's a perfect neighborhood spot. 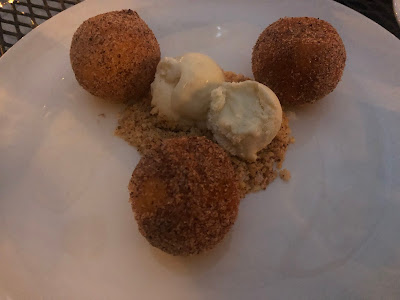