Today's stop is in what used to be Greektown. Well the neighborhood itself is still called Greektown but the Greek feel of the area is pretty much a thing of the past. There's a handful of Greek owned spots still around but when new places open in the area they're not Greek. Rye Deli & Drink opened right around the beginning of the year and I visited them around that time (when there was no indoor dining) and also since the indoor dining ban has been lifted. It's on Halsted right by the large hotel next to Walgreens. There's a few spaces to pull in and park for pick-up if you're not trying to dine in. If you are looking for a spot in the area to sit down and have some food and a drink Rye Deli has plenty of space. While it's called a deli it's more like a bar and restaurant serving deli inspired food. 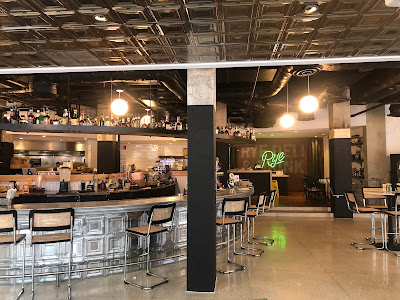 If you're going to call yourself a deli you need bagels and Rye Deli & Drink offers those. Just not with the traditional cream cheese you're used to. Rye Deli uses labneh for their spread and offers it in a few different preps (ex. labneh with melted leeks).This really annoyed and or irritated some in Chicago's food world but the way I saw it was if they're switching it up like that maybe they offer some other interesting things you wouldn't expect to find at a deli. Like the Tunisian style brik pastries they make. I'd never seen these anywhere before I first saw them here but if you look online they're a popular snack in Tunisia. Exact preps can vary but the gist of a brik is a whole egg in a triangular pastry pocket with different fillings included. Rye Deli makes a brik with an egg, fingerling potato, fresh thyme and dill fried in a crispy crepe shell. You can add pastrami if you want some extra protein. 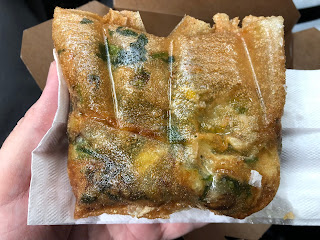 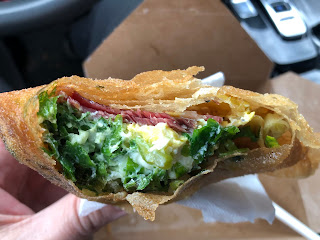 Tunisian Brik Pastry at Rye Deli & Drink
As much as I enjoyed the brik, a sandwich wasn't quite as satisfying. Granted these visits came about 8 months apart and I got the reuben sandwich on my initial visit not too long after they first opened. The biggest problem with it was the saltiness of the pastrami (they use that instead of corned beef for their reuben). It was also somewhat tough like it had been pre sliced and left to sit around and get dry. I just couldn't imagine that someone thought this was a great sandwich so I just chalked it up to opening blues. The execution was there but the final result was a waste of $18. I'm not going to complain about the cost of food these days bc everything else has gone up drastically too and you cant pay a living wage by charging the bare minimum to get by. But if you're charging $20 a sandwich it needs to be good or you're never going to see that customer again. I'm glad I returned bc the brik is a dish I'm glad to have been introduced too. Plus I could tell with the chips and pickles they are making an attempt to bring the area some good made from scratch food and I can respect that. 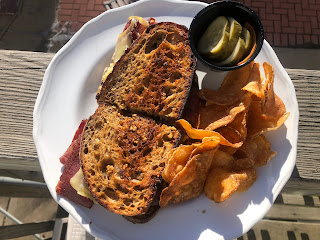 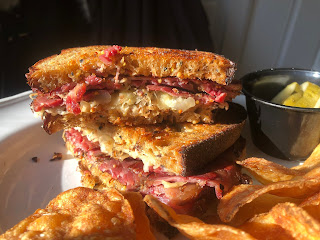