-Grubbing in Chicago
Sweet and Savory Thai Food in Bucktown

We're more than 2/3's of the way done with 2021. It's been a busy year of openings as always in Chicago. There's never not spots opening up shop. With all these openings come trends and other little things I like to keep an eye on. For instance it's been a busy year for Thai restaurant openings. I don't have any actual data but as someone who's always exploring the city's food scene I've been tempted by more than a handful of new Thai restaurants. One of them opened up just around the block from us on the border of Logan Square and Bucktown underneath the Western Blue Line stop. Sweet Rice is actually the rebirth of a previous spot that was located a few miles south. It's owned by a family of restaurant vets as they also run Sticky Rice located a few miles north on Western. 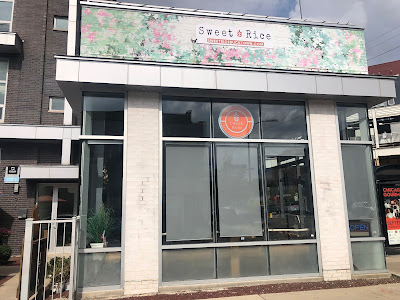 The food at Sweet Rice leans Thai but the menu is Pan-Asian. There's dishes with flavors from Malaysia as well as Korea and more. But it's the Thai stuff I was intrigued with. One of my favorite street foods in SE Asia are the savory seafood pancakes (oysters, mussels etc). I've never been able to find any versions in the States close to those I ate on the streets of Thailand and Vietnam but the mussel fritter (Hoy Tod) at Sweet Rice is one of the better US versions I've tried. It's a popular dish in Bangkok that's enjoyed at all hours of the day. These tasty omelets tend to be extremely greasy from the use of a ton of oil but they're oh-so-good. Sweet Rice manages to serve up an extra crispy version that wasn't drowned in oil and comes loaded with crisp bean sprouts on bottom. 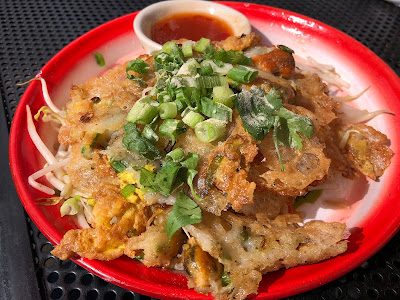 Hoy Tod (mussel fritter) at Sweet Rice
If you've visited their other place (Sticky Rice) you likely know that they focus on Northern Thai dishes over there. Not as much so here but they do offer up a collection of meat salads popular in Northern Thai cuisine. I tried the crispy chicken larb one scorching hot day this past August and added some sticky rice to soak up all the wonderful slightly funky fish sauce mixed with lime dressing used to coat the chopped fried chicken. Fresh slivers of red onion, carrot, Thai chili is mixed with rice powder while fresh chopped cilantro and basil rounds it out. This was some good eating on a hot and humid day. Crispy Chicken Larb (with sticky rice) at Sweet Rice
All the other dishes I've watched come out of the kitchen look good, and Steve Dolinsky just did a feature on Sweet Rice too. But don't sleep on their awesome dessert offerings. I got into them on the same visit I mention a paragraph up during the dog days of summer. I tried a Thai Style Shaved Ice aka Nam Khang Sai. It's made with shaved ice, red bean, jackfruit, coconut, green jelly, sweet palm seed, and sweet milk with syrup. I've since returned with my two year old niece who also couldn't get enough. But then there's also a wonderful hot dessert called Ka Nom Krok that are little individual coconut hot cakes topped with green onion, corn and taro. They're different and delicious. Great homemade coconut ice cream served with peanuts, and evaporated milk as well. I'm really happy to have Sweet Rice and both their sweet and savory Thai style offerings around the block from us. 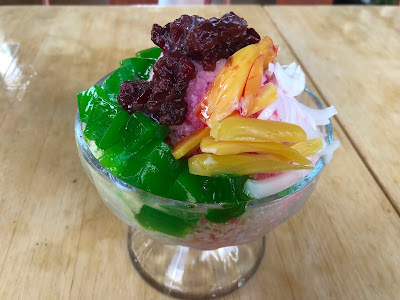