It's not often you come across restaurants serving the cuisine of Kuwait. Actually when I first learned of Nada Restaurant in Riverside I wondered what exactly Kuwait food was. Obviously it's Middle Eastern but I couldn't name a single dish from there until I looked at the menu from here. 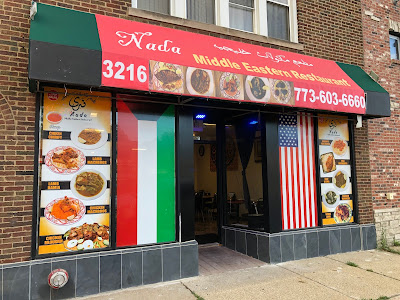 The online reviews for Nada are almost unanimously positive. I was liking what I read so I made it a point to check this place out when I was out in the area. It sits on a busy strip of Harlem and was dead quiet on my visit. More on that in a minute. According to some online research Kuwait cuisine is a part of Eastern Arabian cuisine. Seafood is a significant part of the diet and a dish called Machboos is commonly mentioned when Kuwaiti style food is being discussed. The menu at Nada is small with only about ten offerings total. One of which is Machboos served with your choice of shrimp, fish, chicken, lamb. I decided to try the shrimp version as it was commonly mentioned in online reviews. Machboos is a real meat and potatoes type dish except with rice instead of potato. It's also called Kabsa. I have no other versions to judge Nadas prep by but it was just ok and I think that's bc I got an old batch of shrimp that was pre-cooked. Like I said it was empty in there and I'm guessing daytime isn't the best time to visit. I imagine it's busy in the evening, especially on weekends and the food is cooked fresh. Not sure what happened bc what I got was not worth the rave reviews, maybe I was gringoed? Who knows. What I do know is that there's no way my shrimp was cooked to order. I'd certainly give this place another try (the rice was fluffy and fresh) but not if it's empty inside. 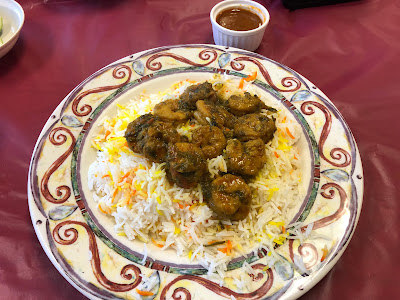