I'd long wondered about the Honey Baked Ham Co. If I remember correctly they used to have a spot on Grand. Actually that may have been an entirely different ham operation for all I know. I just know for sure I was always interested in ordering a mail order ham but we never really ate whole hams in my family. So I was never familiar with what the Honey Baked Ham Co. is other than a franchise. 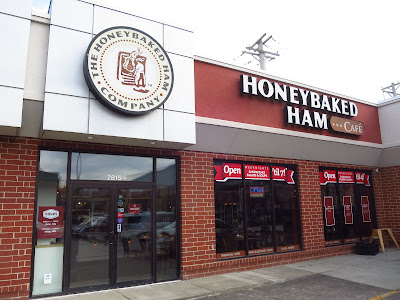 I recently decided to stop in after I saw someone else had checked in from here on social media. I'd never really known they did sandwiches. I always just assumed they were an outlet for people to pick up hams they order online or by phone and it's still that. But they smartly added a cafe aspect to their stores as a way of getting more customers in. Bc as much as I want to order one of their hams I don't have a use for so much of it. I was actually hoping maybe they sold ham bones that one could make split pea soup and such with but you have to buy a ham and eat most of it to get that coveted soup bone. When I learned that Honey Baked Ham Co. was founded in Detroit I got a little more confident in them. There's nowhere else in the States where they take ham sandwiches as serious as Detroit does. Turns out as far as a sandwich franchise goes these guys are pretty serious about ham sandwiches too. I tried the Tavern Club served with their signature ham, smoked turkey breast, bacon, cheddar, lettuce, tomato, mayo, honey mustard on multigrain bread. Served with a little cup of potato salad I was surprised how much I liked this very well put together sandwich. Both the ham and turkey were thick sliced and definitely not the generic sandwich meat served at other franchised spots. 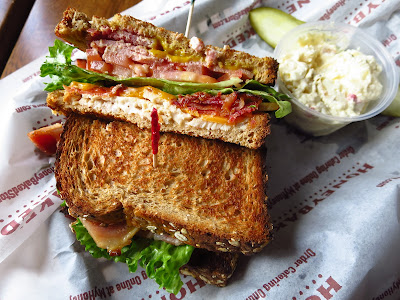