Over on instagram (@chibbqking) I'm showcasing a different immigrant owned business each day this week. Yesterday I profiled this new jerk spot up on Howard street. I'd heard about it over on LTHforum where it received a glowing review from someone who knew what they were talking about as far as Jamaican food goes. So I met up with a couple old timers from the forum for lunch at Yamon Jerk Grill. Run by a Jamaican from Ochos Rios they're bringing real deal jerk chicken to the Northside. 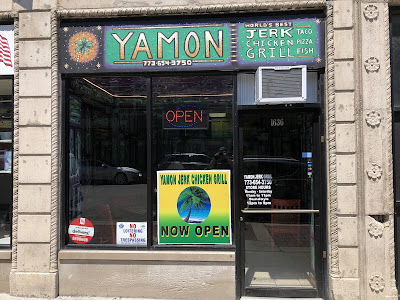 I could smell real smoke as soon as I stepped inside Yamon. That's bc they're grilling over live charcoal and stuffing pimento wood chips underneath it. Pimento wood being the traditional West Indies wood used to cook the meat over going all the way back to the 1400's when local tribes basically invented grilling. So we knew we were getting jerk chicken and we also decided to try some jerk pork as well as saltfish festival which is a type of bread dumpling stuffed with dried saltfish that's very popular on the island. The pork came loaded with BBQ sauce even though we asked for it on the side we were told it comes with it on already. I knew then and there it would be average at best. 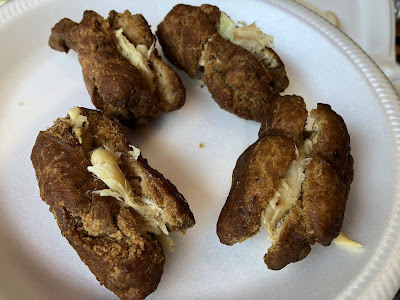 The festival was a better than the tips but I got the feeling that the jerk chicken is where it's at. After the standard on Caribbean time wait our lunch specials arrived. I popped it open and the sweet smell of wood grilled jerk chicken hit me. Housemade jerk sauce is served on the side in the standard smallest cup possible. Haha. What is it about that? But the sauce makes for a delicious dip for some really good chicken. In fact it's as good as I've had in the States and reminded me a bit of a spot down in South Florida I've been to a couple times. The chicken came with really nice rice and peas as well as a warm cabbage, plantains, bread, and also a drink. All for $7.50 making it one of the best lunch specials in the city. I suspect I'll be back here the next time the taste for jerk chicken calls. 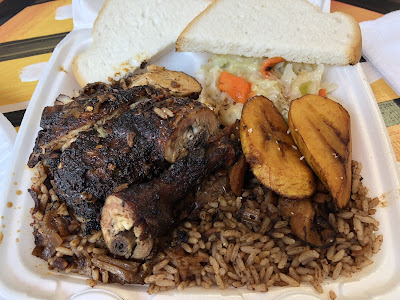