I'm noticing a small trend happening in Chicago restaurant openings right now. Places cooking the food of different African countries are slowly popping up. Chicago and Uptown in particular have always had a steady presence of African food but there are new places popping up in areas other than there. Today's stop is the first South African restaurant within city limits not including Nando's. 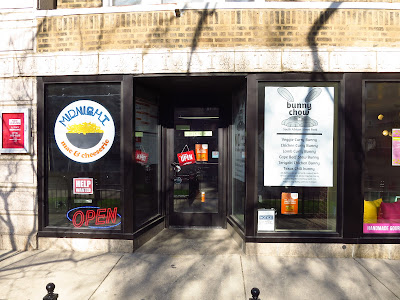 Bunny Chow is named after the dish it specializes in. That dish is the signature snack of Durban which is the country's second largest city in terms of population. It's also the home to more Indian people then any other city outside of India. Bunny Chow is thus a hybrid of both Indian and African. It's essentially at heart a curry dish by which the curry can vary. It can be anything from Cape Malay Beef Curry to a classic Butter Chicken. It's unique in that it's served different in that it comes served in a hollowed out halved loaf of bread. You use the hollowed out portion of the bread to pick at the curry never needing the use of utensils. I got try a few different options when in Cape Town a couple of years ago but I've never seen the dish over here in the States. Bunny Chow served a pretty mild blend of beef curry that definitely had that home cooked taste. In case you were wondering the only other South African restaurant in the state is in Aurora where a Durban family is making meat pies. 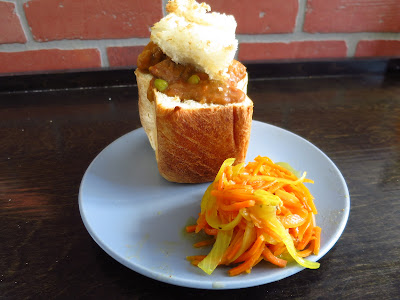