Usually a trip to the Home Depot's or Menards means a Chicago dog. Albeit a boring skinless wiener. But about four months ago I noticed a Polish food trailer permanently parked in the lot of Menard's on Clybourn. My first thought was it was a pretty awesome idea. After two visits he seems to be getting a steady crowd so how cool would it be if this became a thing? I guess it makes to much sense. 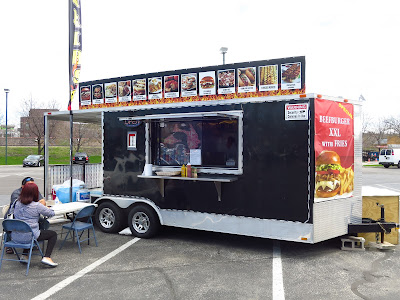 I dont know much about the people behind the trailer but they do seem to be Polish if not Eastern European. The menu had quite a few options both Polish and also American. The latter of which are things like burgers, corn on the cob, and fair style fried potato sticks. As far as the Polish food goes it's pretty traditional as far as the classics go. You know stuff like potato pancakes, Polish sausage, stuffed cabbage, and of course pierogi. My first trip there I got some potato pancakes. I love them but I didn't love these. Had I known that they would comes with sour cream, bbq sauce, and some sort of orange colored concoction I would have said put it all on the side. But aside from that the pancakes came out so quick who knows how long they'd been sitting in there. They didn't seem so fresh. 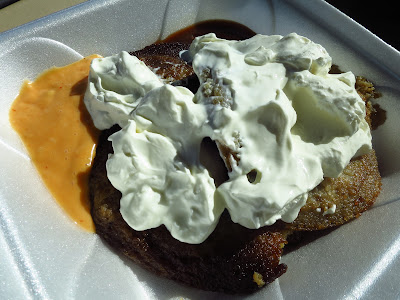 I still gave them a second chance and damn-it it didn't go much better. I tried the pierogi and forgot to mention that of there was sauce not to put any on them. Reason being is they have pictures of all the food and they aren't sauced in the pic nor do they mention it in the description. On top of all that they said it was a mix of meat. potato, and cheese but all they gave me was the meat. To one dimensional and I'm not a fan of bbq sauce on my Polish dumplings. I'm thinking the sausage is the way to go. 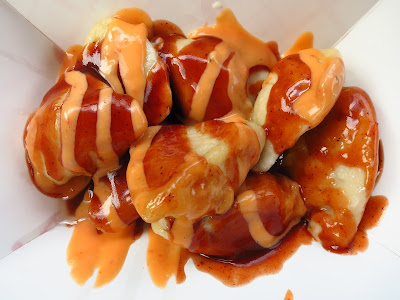 Pierogi at the Polish Food Trailer

Whaaaaat? I'm on my way!