I noticed this new sushi place on 26th street a while back before they opened. It caught my eye bc 1) there's not much sushi to be found in Little Village and 2) it spoke of Japanese and Latin fusion. While many of the fusion foods out there are gimmicky there's a real connection between Japan and Latin America. It's real in places like Brazil, Peru, and Baja Mexico. So I was at the very least intrigued to see what they'd be doing. I drove by recently and it was open so I stopped into eat. 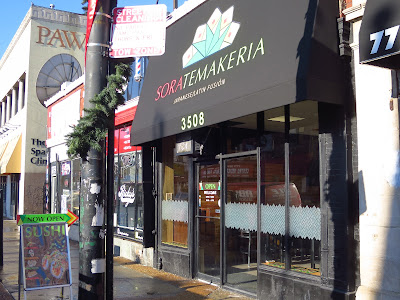 On their website, Sora Temakeria, states that they're "the Japanese counterpart of the Latin taqueria! The Temakeria was conceptualized in Brazil in early 2000 and has gained popularity worldwide ever since." They offer traditional rolls with a few Latin favored ingredients as well as Tamaki (hand rolls), and sushi bowls, and burritos. But what caught my eye strictly from a curiosity standpoint was the fried sushi. I had to give it a try even though I knew our meeting would go lukewarm at best. I tried the 'La Gorda' roll made with eel, cream cheese, avocado, spicy mayo, and sushi sauce. It was about what you'd expect. It tasted like Fair food and you can take that to be a good or bad thing. Your call. 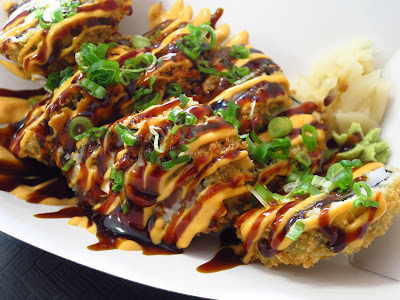