The building at the NE corner of Western and Ogden has been many things over the years. It recently welcomed a new tenant in the form of a place serving Plate Lunch. Doubling the number of Hawaiian restaurants in Chicago. When I drove by one day last summer I noticed the 'coming soon' sign with the hashtag #AlohaWagon and I looked it up on instagram. It turns out the people behind this place used to run a food truck of the same name in Honolulu. I browsed through their instagram page and noticed a post saying they were moving to Chicago. I was excited for their arrival. You should be too. 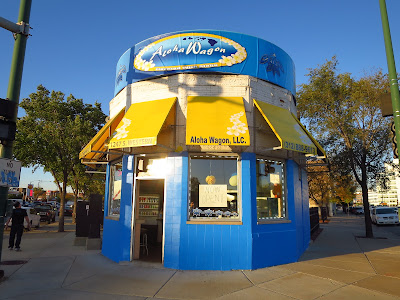 Newly Opened at Western and Ogden

Aloha Wagon opened in the early Fall and me and my friend who spends time with family in Hawaii each year didn't wait long to go check it out. The couple behind this place has roots in Chicago where she's from but they spent time in Hawaii, where he's from, before moving to Chicago. She works the front of the house and he cooks it up. For now the menu is sandwiches and plate lunch. Browsing their insta page I noticed they ran tons of specials in Hawaii and they plan to do the same here. In the meantime the Plate Lunch is perfect. No folks, poke is not the official dish of Hawaii. Not anymore anyway. It's sudden morph into Chipotle like status has made it unappetizing when served off of the island. A better rep of Hawaii as far as a dish goes would be the Loco Moco as seen below. 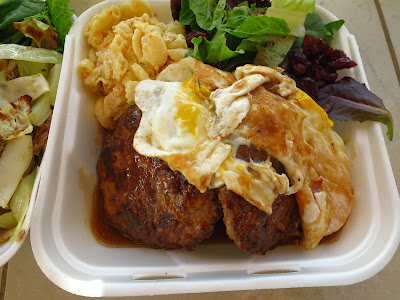 So for those that dont know - plate lunch is a popular meal in Hawaii. It consists of your choice of entree with rice, macaroni salad, and sometimes a regular salad. The Loco Moco is one of the more popular forms of plate lunch. It's one of the great carb bombs of the culinary world. More times than not it's made with two hamburger patties served over 2-3 scoops of white rice and topped with lots of brown gravy and one or two fried eggs. As always with a plate lunch there's a side of macaroni salad. It's a dish that I get yearly cravings for. Oddly those cravings come during winter more so than summer when Chicago's climate is closer to Hawaii's. If you want to warm up during this cold streak get a Loco Moco lunch plate. It's much cheaper than one of them Canadian Goose jackets. 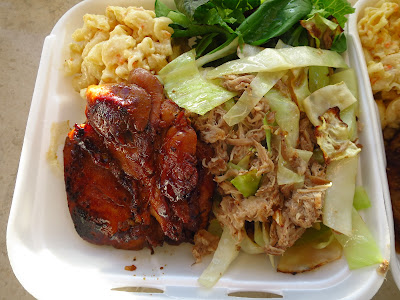 Other popular forms of plate lunch are BBQ chicken, Kalua Pork, and Katsu Chicken. I've tried all three as it's easy to try two different items at a time by getting a mixed plate which is a popular two meat combo plate plus sides like you'd get at Panda Express type place. But this isn't corporate crap being pushed to the masses. It's real deal food like that which you'd find at local diners, food trucks, and houses in Hawaii. The Katsu pictured below is fried to order and it's top quality stuff. As are the chicken and pork. I know this hasn't been an easy first year in Chicago for them solely based on the weather but it's a pleasure to have them. I hope they're around a long time. We need spots like this. 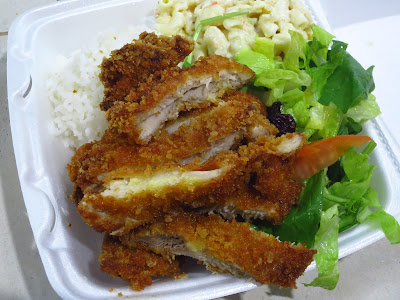