It's the holiday season and that means plenty of time spent traveling on the roads and thru the airports of America. Sometimes we don't have the time to seek out the great local mom and pop shops when on the road and traveling and are forced to settle on fast food. But that doesn't mean you have to settle for the usual suspects. To each region their own when it comes to local fast food outlets founded in and now popular in a certain area. Today we head to Ohio where Greek immigrant Nicholas Lambrinides started Skyline Chili his Coney dog restaurant named after the city's skyline that could be seen thru the inside of the original location. Coney Dog and chili spots became popular cafeterias in the Midwest back in the day and Cincinnati developed it's own type of chili in the process. Skyline chili remains one of the most well known from the region. 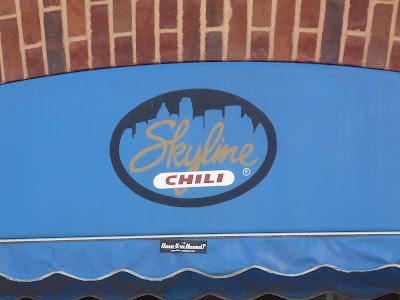 Birthplace: Cincinnati, OH
Type: Private
Founded in: 1949
How Many Today: Over 100
Locations in: OH, IN, KY, FL
Menu item that made them: Cincinnati style chili

The original founder of Skyline was working as a chef for the Original Empress Chili restaurant which is another well known Cincy chili parlor. Nicholas played around with the recipe and eventually saved enough money that in 1949 he and his three sons opened a spot of their own in the Prince Hill neighborhood. According to Wikipedia the neighborhood was mostly Roman Catholic and didn't like the place at first but it eventually became a local landmark once people started realizing your diet doesn't determine your fate. The dad eventually passed away back in 1962 as they had started rapidly expanding throughout Ohio. The sons took over and promised papa not to change a thing with the chili recipe which has become synonymous with Cincinnati style chili. What gives it it's own style in that it's different from say, Texas chili? Well it starts with a unique blend of spices, a few of which are on the sweet side. The chili is also served almost always over spaghetti or on top of hot dogs. I got to stop at a Skyline a couple summers ago and gave the two most popular menu items a try. 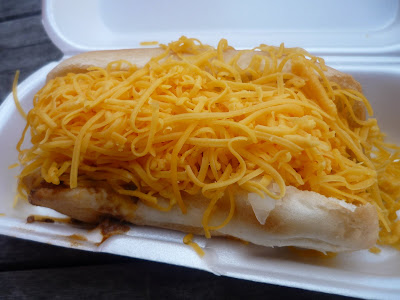 The hot dog was alright. As someone who loves chili cheese dogs as well as Coney's it doesn't take all that much to please me when it comes to these food's. Skyline offers their famous well guarded chili recipe in a few numbered ways. If you go "five way" your getting the entire package which is the chili served over spaghetti with cheese, beans and onions. You can go three or four way by taking some of the items that accompany the chili off. I believe I went with the four way on my visit which was with spaghetti, cheese and onions but no beans. It's a style of food unique to Cincy and also to me since this isn't how I prefer my chili. It's said that cinnamon and chocolate which are two ingredients commonly used in meat dishes in Greece are the secret touches and you can taste the sweetness. Coming from the Midwest I'm not unfamiliar with chili mac so pasta with my chili is something I can stand. I just prefer my chili spicy to sweet. 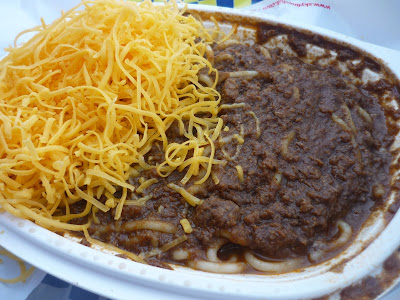