It's the holiday season and while Black Wednesday might be past us, there's still many more parties to come. Let me start off by apologizing that I haven't gotten around to getting another beef scored up over at "Beef With Hot" I've been busy with chibbqking here and just haven't had the time. But like I said last time I said this, I have many spots waiting to go up and will get to many more this winter. So today we head to a hot dog stand in Lincoln Park called The Dog Joint that I just featured over at What's Your Beef. They've been over on Armitage for a couple years now and it's a late-nite favorite of heavy drinkers in the area. 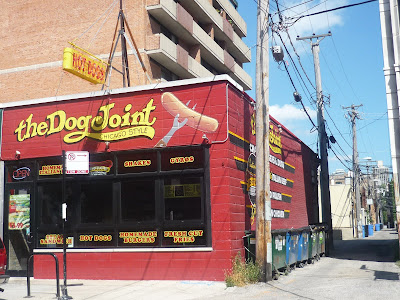 The Dog Joint in Lincoln Park

Before this place was the Dog joint I believe it was another hot dog stand maybe Rock Star Dogs? I never went there but when the Dog Joint opened up the homemade Italian beef is what caught my eye and eventually prompted me to go in. I have been there a handful of times now and the Italian beef was ordered on every visit but one. The best part this beef sandwich has going for it is the actual beef. It's a homemade roast that is sliced fresh to order when they arent too busy and it goes on a pretty good roll and the hot peppers and gravy are both good as well. It's actually one of the better beef's I have had from a hot dog stand. I also like how they have late nite hours on the weekends as well. One of the better beefs in an area lacking them. 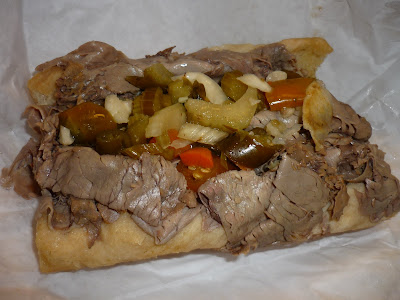 During a few of my visits for an Italian beef I was tempted by other items on the menu. I obviously had to try a hot dog and eventually did so but I also ordered the fried tacos on a few visits and have come to like those for what they're worth. We don't have any Jack in the Box's here in Chicago but one of their more famous items are the tacos. This is typical drunk folk food. All they are is frozen hard shell tacos with beef mixture in them that are deep fried and then dressed with lettuce and sour cream. Not exactly anything special but I guess they become that after a few too many cold ones. So if your from the West Coast and have been looking for something like your beloved tacos from Jack In the Box then the Dog Joint might be your savior. 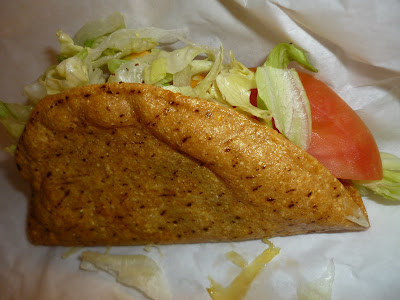 Fried taco from the Dog Joint

Then there's the hot dogs. Of course I was going to give one of them a try and I soon did. I must say I wasn't all that impressed. Maybe it was just a bad night but the dog had no snap and it was as if it had been sitting in water forever. The bun was soggy from the watered down dog. Toppings wise it was better, they topped it Chicago style with cucumbers, pickles, tomatoes and the works but when the encased meat is no good it's hard for the hot dog as a whole to be anything special. I haven't tried one since, choosing to stick to the beef's which I do like. See ya next time on S'C'&C. 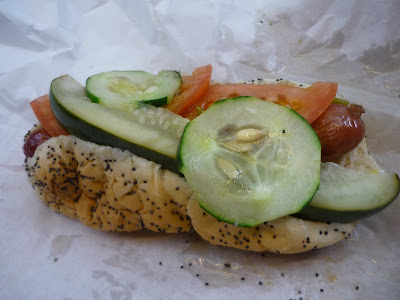 If you're in the burbs and crave a Jack In The Box type taco, Novi's Beef in Berwyn at Ogden and Oak Park makes a great rendition as well.

New owner now and same name. The previous short-lived owner did have "mini tacos" but not for long. Was very proud of his homemade roast beef, but it was tenderized and hardly any au jus. Hope the new owner didn't keep that recipe. I won't order it. And I find the place a little pricey for a dog place. Lots of bad reviews for this place. I've been there twice and will try again. One more time!