It's that time of the year where we pay a little homage to da superfans. In doing so we take a trip to one of da fans favorite stands in all of Chicagoland. Wolfy's has been in Chicago over on Peterson ave. for over 40 years and has been keeping da superfans and all of Chicagoland satisfied since 1961. Its a Vienna Beef Hall of Famer and has always been known as the stand that you could eat a fry off the floor the place is so clean and the one that can please an army with its long list of Chicago fast food favorites like natural casing Chicago style hot dogs, Polish sausage, burgers, gyros, pizza puffs, grilled chicken and the list goes on and on. It also has one of the best neon signs in the city which you cant miss when driving by. 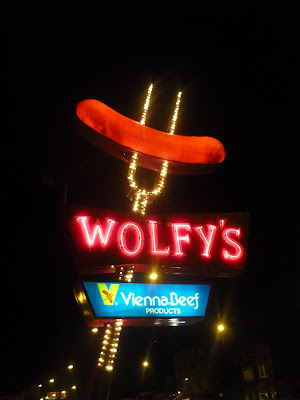 I almost always stop when I'm passing by and I see the neon glowing in the night. Its impossible to pass on a small treat to munch on when your passing by and I rarely do. Although I'd like to be able to further explore the menu I just cant get along to doing it. When I go to Wolfy's its always a hot dog or Polish and more so than not its both. While the old school minimalist style is my Chicago dog of choice that doesn't mean I don't love me a good (other) Chicago style dog. I would easily put Wolfy's among the best in the city when it comes to their Chicago style dogs. The natural casing Vienna beef wiener is so full of flavor is doesn't get lost in the proper garden of toppings and is served on a (always) perfectly steamed poppy seed bun. 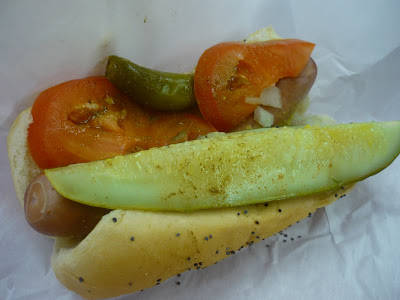 I love the dogs but when it comes to Polish sausage Wolfy's is one of the lands very, very best and always a first team all city when it comes to the sausage. Sometimes you want a Polish and just feel like a Wolfy's. They take the sausage out the fridge and its dropped into the deep fryer for a few seconds and then thrown on the grill to char it up and add some more flavor right next to the sizzling onions that are going on top. With the onions goes mustard, pickles and tomatoes and its popped into a poppy seed bun. 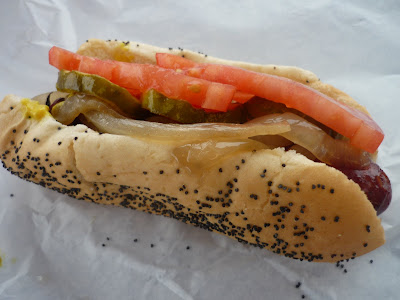 Yeah, yeah I know the pickle and especially the tomato toppings are not traditional but we superfans like to take those off and eat them as a palate cleanser after the sausage is consumed. The combination of deep frying and grilling a best in the business Vienna beef Polish sausage along with the perfect product consistency time after time is what makes Wolfy's as legit a Chicago hot dog stand as we have and one da superfans will always love. 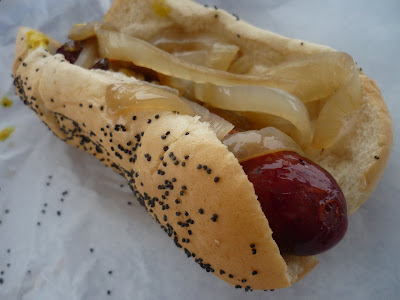 One of the cities very best