Over here at S'C'&C we like to give the much deserved praise to the family run joints that have consistently put out a good product. Today we head out to Melrose Park to a spot that's been around since the 50's. It all started in the 1930's in Serino, Italy when a third generation Italian baker was handed down the family bakery from his dad who got it from his dad. After the war he decided to move the family to America and in 1954 he opened his small Italian bakery in Melrose Park on Lake St. It was called Melrose Park Italian Bakery and they offered many specialty Italian products but it was his old world recipe from Italy for Italian bread that gave the place its place in Chicagoland restaurant history.

Umbaldo Datoli passed away in 1969 and the bakery was taken over by his daughter. It was then in 1976 that her husband Joe would quit his job and help out with expanding the business. By 1978 they changed the name to Scudiero's Italian Bakery and Deli. The fresh baked Italian treats like an array of cookies as well as cannoli's are loved by everyone in the neighborhood from youngin's to old timers. Joe was a diehard baker and as the years went on Scudiero's continued to be a neighborhood favorite. So much so that they even stayed opened on Sundays so that people going to tailgate and having parties at their places for the Bears games would have his bread, subs and pizza for the game. 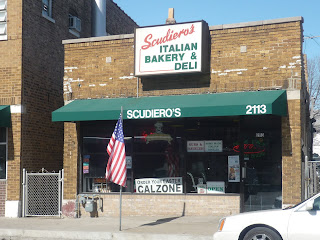 Scudiero's on Lake St. as it still stands today

The bakery went from just that to a hangout where people spent the day munching away and chatting up whatever was on their minds. The place was loved by everyone and the spot you went to if you wanted to run into an old neighborhood friend you haven't seen in years and was visited by 1000's and 1000's of people including the late great Frank Sinatra. They posted pictures covering the walls of customers and celebs holding a Scudiero's fresh baked bread bag of which they just bought. In 1998 the place went under a total remodeling and it is what it is today. It was a sad day when Joe passed away in 2007 but the place stayed all in the family and is run by two of Joe's six sons who happen to be twins. Anthony and Aldo, who is a fifth generation baker still use the same recipes that have been in the fam for over 150 years. 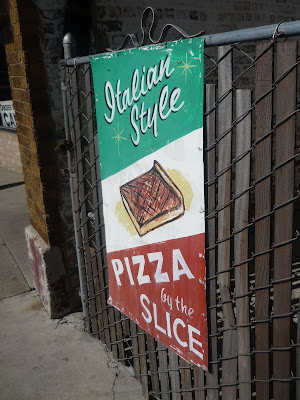 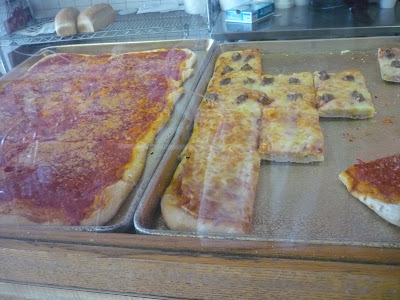 Sicilian style pizza is available as well as round individual pies 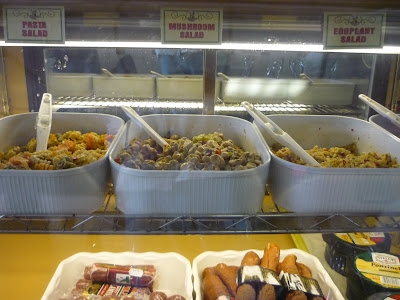 as well as salads, dried sausage and cheeses

I like it all at over there but what really keeps me coming back when in the 'hood is the Italian sub. As you might expect the bread on the subs at Scudiero's is excellent and always has the perfect texture and when paired with good quality meats, some addictive oils and seasonings as well as always being made to order it becomes an excellent sandwich. 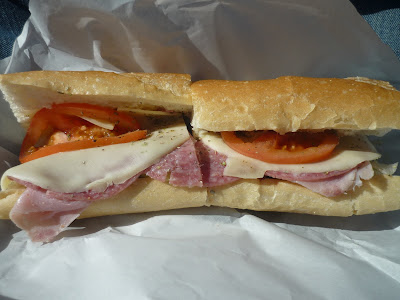 I find myself in Melrose park a few times a month and I love stopping in here. You'll always see some old neighborhood guys chatting it up at a table with come coffee and cookies and the folks behind the counter are great people who will remember you when you come back. The prices are very fair and the quality always good. Its a great neighborhood joint that we should hope we never lose. It's the places like these that you just don't see too much of anymore. So here's a toast to Scudy's living on forever and staying all in the family in doing so. Cheers. 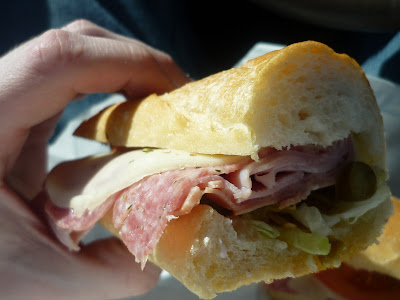 Get in my mouth!