Today's stop on the steak taco tour takes us down Chicago ave over to where it meets with Grand in Humboldt Park. I cant pinpoint exactly how long this place has been at the corner over there but I do know I used to work with my grandpa over summer in a lot my dad and uncle own right down the block. I went to the former Mexican taqueria before this place opened a few times and it was never that great. I always ate at Boston's Beef anyways which is across the street. At some point though this place opened up, not recently or anything, its been there for a while but I just got around to trying it this past summer and realized I had made a mistake immediately after my first bite. 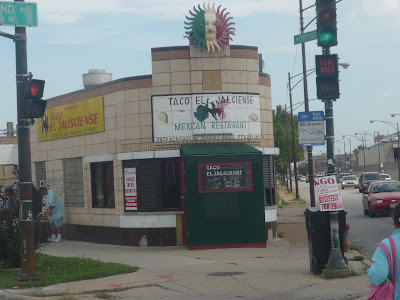 At Chicago ave. and Grand in Humboldt Park

This place always had the look of a classic taqueria as you can see so from the photo above and I really should have stopped in sooner so I could realize that its also got the tastes of one. I went in around late lunch hours one day and was pleasantly surprised by the fresh roasting al pastor spit, however the meat was just put on it so it wouldn't be ready on my visit. I decided to go with the steak tacos which a friend rec'd to me. When I asked if they were real deal tacos de carne asada he replied "you think I'd be waiting there if they weren't" since he is a proud Mexican it made sense that they would be and that they were. The skirt steak was being grilled as I waited and chopped up and thrown into a tortilla and topped with standard toppings that belong on a carne asada taco. The steak was as good as I've had on a taco in a while, very juicy and full of steak flavor. Toppings were fresh and with Chicago's abundance of fresh tortillas as always those were good too. All in all one of the best stops for steak tacos in the city. Especially when they're on their game. The salsa was good, not the best but everything else stood out. 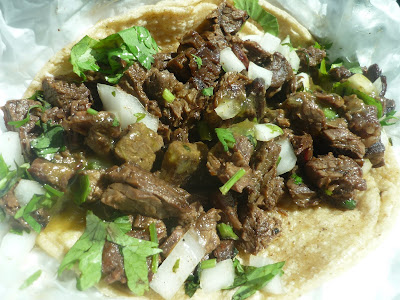