My summer food project is to perfect the art of jerked pork like that found throughout the island of Jamaica. The jerked pork served at the stands in Boston Bay on the east coast of the island in Port Antonio is cooked the way the maroons did it over 400 years ago. The term jerk is said to come from the Spanish word charqui, a term for jerked or dried meat that translates to jerky in English. Its said that the Maroons, Jamaican slaves who escaped from the British invasion in 1655, favored the method of jerking because the spices used kept the meat well preserved and gave the food its unique flavor. Even though chicken is the most popular form of jerk, the original jerked meat of choice was wild hogs. The Maroons caught the pigs hunting and used the meat as fuel during their escape from the British. Due to the meat being jerked it lasted much longer and was used as a meal for multiple days. 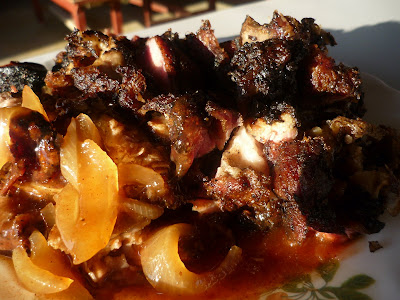 Click here for more Jerked Pork pictures from around Negril

Its my goal to get as close to the real thing as possible like that found around Jamaica. It will never be as good due to the fact of a lack of pimento wood being available in the US and if you want to take it a step further to being as authentic as possible you also need fresh branches from the trees to hold the meat over the wood/fire. I started making jerked pork after my 2nd trip to Negril and have had some luck getting close to an authentic island taste. My first cut of meat in the experiment is going to be with what we used back in Madison, country style ribs with bones. 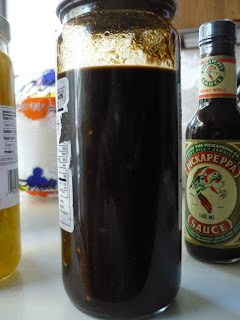 One reason it is experiment time this summer is I have a bottle of homemade jerk sauce from Bourbon beach in Negril, Jamaica in my fridge and this stuff is fire in both heat and flavor. Meaning its amazing. Its not really a marinade but rather sauce to dip your pieces of pork in as you eat. The BBQ sauce of the island so to say. Special thanks to Tuens for bringing some of this back to me a couple weeks ago. I totally forgot to grab a few to bring home when I left in late March.

Ingredients for jerked pork (serve with rice and peas)

Step 1 (1 day ahead of cooking): Pat down the ribs with a bottled jerk paste such as Walkerswood, Grace or Eaton's. Give the meat a nice rub down making sure to get the paste spread out. Put in refrigerator and let marinate overnight.

Step 2: Prepare charcoal for the grill or if using a gas grill light both the left and right ends but not the middle and make sure you have a smoke box for the wood. When charcoal is ready spread it on the left and right sides for indirect cooking leaving the middle empty. Put a drip pan with water in the middle and layer the charcoal with wood. Put grill grate back on and place ribs in the middle and let cook for 3-5 hours or until meat start to pull away from bone. Every hour or so put a handful of allspice berries on each side of the fire to give it a nice scent to penetrate the meat. 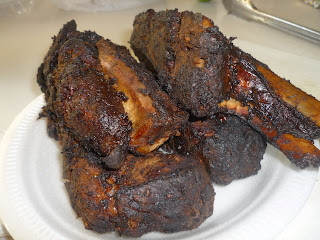 Step 3: When ribs are cooked bring inside and get your largest most heavy knife or a machete if you got one and start chopping. Bones and all chop the ribs into little square pieces like those seen below. 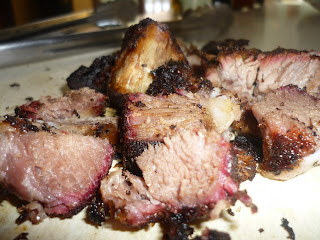 Step 4: Put a layer of rice and peas on a plate and top it off with some pieces of chopped jerked pork. Serve with jerk sauce, hot sauce and or pickapeppa sauce. I topped mine off with some pepper rings to tone down the heat from the paste and sauce. 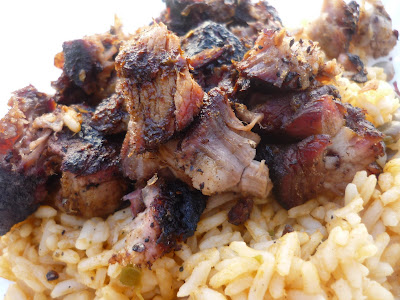 Perfect for a summer smoke session 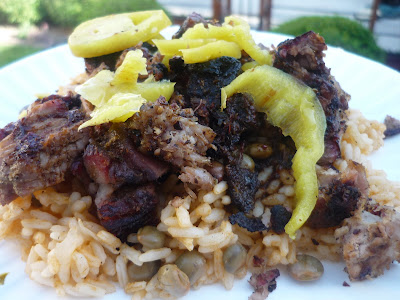 All in all it was damn close in flavor and texture but not as juicy as I would have liked it. It was a little dry. Maybe the country style ribs aren't fatty enough? I plan on trying it with rib tips next and I know they use a full pigs hip at Ossies Smoke Shack in Negril. Any suggestions and tips from any Jamaican readers or BBQ experts would be much appreciated. Respect mon. KingT.

Where to get the Caribbean grocery goods in Chicago?

Good question and one answer is Danny's Old World Market on Broadway just off Foster. 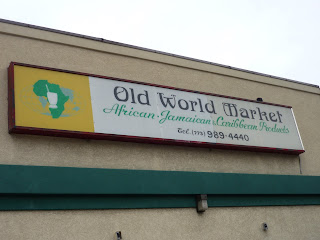 located in a little strip mall on Broadway

Danny's carries a wide variety of African and Carib goods and is sure to have that regional cooking ingredient you couldn't find at Dominick's or Whole foods. On top of the wonderful spice/sauce and dried/canned/bottled ingredient selection they also have a butcher and wide range of fruit. Name a part of an animal and odds are they have it there. Its a good place to stock up on sauces and pastes for the pantry. I don't even eat ketchup with my fries but I love the jerked ketchup from Eaton's that they carry there. It goes great with home fries and breakfast potatoes. 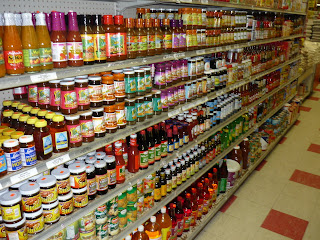 Aisle of Jerk Paste and other Caribbean sauces

I'll have to check out that market.

Man that looks good. Wilburne at Ossies always sells me his dry rub spice that he uses. Makes the luggage smell great too.

Look at that aisle of sauces!I's go crazy. The pork looks really yummy esp with the charred bits.

That looks so completely evil! Great, now I'm craving ribs at midnight. Care to fedex me some?

Thanks for posting, I really liked reading your most recent post. I think you should post more often, you clearly have natural ability for blogging

Great website - well done!
Let me share one tip with you for making jerk pork.
Use the cut of pork known as Boston Butt, which is actually from the top of the shoulder of the animal. Cut it into pieces the size of your rib chops and proceed as you did before. Good luck!

Thanks for the tips. I think the Boston butt is the most common for the places that do it boneless but I know Ossies uses a whole pork shoulder. Im going to have to try that though this summer and I'm going to be it tastes like Red Dragon...by no means a bad thing. Thanks.