Beef with hot from Tony's Subs

Tony's Subs in Deerfield puts out what I feel to be the best Italian beef in the Northshore. I first read about this place five maybe six years ago in a magazine article about chefs favorite places to eat when they aren't working. A well known chef mentioned that she loves Tony's and cant enough of the homemade Italian beef when shes not in the kitchen. She went on to call it the best beef in Chicago. Like I always do when I hear that and its a place that I haven't been to I make a mental note and put it on my to beef list. Tony Viti opened his sandwich shop more than 44 years ago in his hometown of Deerfield. There was a time when Tony operated six locations of the sub shop including outlets in North Chicago, Libertyville, Highwood, Waukegan and two in Deerfield.

Here we are 43 years later and Tony and his family are still supplying the families of the area with the same great sandwiches as always. Unless your from the area, in which case you've been eating here since your childhood, you might not expect this sandwich shop next door to a Citgo to be anything worthwhile. The daughter of Tony recently opened a second location in Lakewood with her husband running it up to par with the one she grew up on. 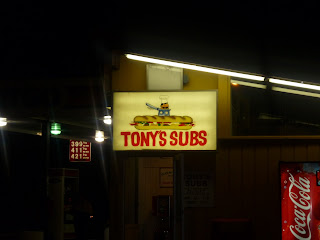 Tony's menu is filled with a wide selection of both warm and cold subs along with soft serve for the kids which is a must when you have a place in the Northshore and you want kids to demand their ice cream and sandwich to their parents. One of the most popular sandwiches is the Launcher and it consists of salami, bologna, mortadella, ham and provolone cheese with a total of 19 slices of meat. When you walk inside you are immediately greeted by pictures of all the wonderful options to help make your choice a little easier. I have enjoyed the launcher but prefer the warm subs made with toasted bread and enjoy the meatball but nothing there is as good as the homemade Italian beef. Its a nice mixture of thin sliced beef and shredded beef with a gravy that has nice flavor topped with what may be store bought giardinara but it is still a good one.

What separates this beef from others is the toasted bread and it doesn't hurt that a large is a real mans size beef bigger than most out there. The toasted bread is an interesting addition to an Italian beef and it works for Tony's. I wouldn't want a beef from Johnnie's or any other place this way but from Tony's its a real treat. Long time customers also really like to devour an order of their air crisp fires. Different in that they bake them in a machine instead of deep frying them. They are good and taste like a light version of McDonald's fries. 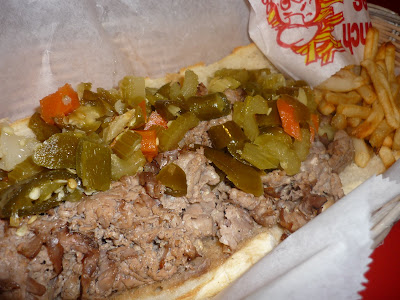 large beef with hot from Tony's

Originally posted at Whats your Beef?
Posted by KingT at 10:00 AM