Orange Garden: a trip back to 1953 for an egg roll

The egg roll is on every American-Chinese restaurants menu in the country. The problem is that at about every 9 out of 10 of these places they are just bland frozen logs that have no flavor at all. Most places don't make their own egg rolls anymore and that's a damn shame because a fresh fried homemade egg roll is one my favorite things to eat. As time has passed and I have grown older I have found myself exploring more authentic Chinese dishes and not just the American Cantonese stuff like sesame chicken, orange beef and of course, egg rolls. But like everything you grew up eating as a kid, every now and then you just have a craving that can only be beat with what you grew up on. In this case good old classic greasy 50's style American/Chinese. 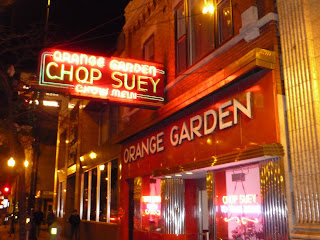 Orange garden is a neighborhood favorite of the locals from the Lakeview area. Located on Irving Park just off Lincoln it is one of Chicago's best remaining examples of mid-century design. The place is straight out of 1950 with its amazing old school neon sign on the outside and old black leather booths and wooden tables/chairs with dim lighting upon entering. I have been told and read on the internet that Orange Garden is the longest operating Chinese restaurant out of the same location in Chicago. When locals who also grew up in the area need some nostalgic eating experience then Orange Garden is their place. Just like any other locals favorite it attracts people of all sorts. You'll see families, couples, high school kids and city workers enjoying a meal inside. The menu at the garden consists of the usual dishes found on a 1950's style American Chinese restaurant. But its that egg roll that's the star if the show and what keeps me coming back. 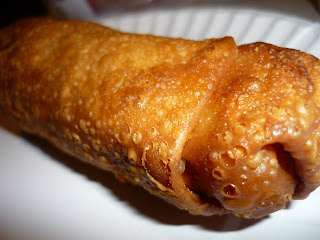 Orange garden's egg roll is one of the best in Chicago 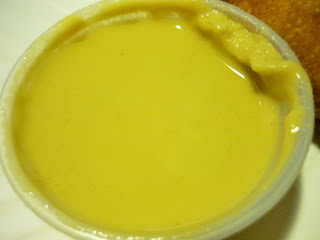 The housemade mustard will test your heat inhaling limits

The egg rolls are stuffed with both baby shrimp and little slices of pork and have a nice hint of peanut butter in them. One of the important factors for a good egg roll on my radar is the hot mustard. None of those packets with lame amounts of heat please, I want it hot. The fresh fried egg rolls are already better than almost anywhere else but when served with the made in house hot mustard it makes one of the best egg rolls in Chicagoland. Unfortunately the menu is hit and miss and as mentioned before it's very standard Americanized fare. The barbecue ribs and pretty much everything else that fried is pretty good but there is a reason that I usually just stick to a couple egg rolls and a small shrimp fried rice. Its not bad just not amazing. Except for those egg rolls. did I mention they were amazing? Stay tuned for a few other spots that offer real egg rolls. 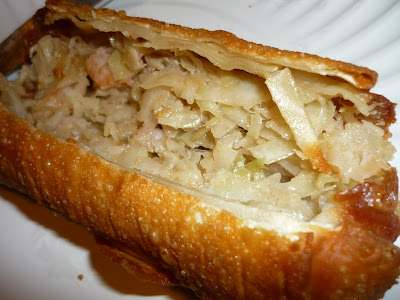 the egg rolls are stuffed with the right combination of ingredients

Oh wow they got some good food man. and I'll admit there egg rolls are deff one of the best in the chi. I mean I'm Chinese and I can tell ya its really easy to screw something like an egg roll up.

Too often I've gone to a whole in the wall Chinese restaurant and gotten a really bad egg roll with my meal.

Ooh, I love the post that spotlights a well made eggroll, although I prefer a good Vietnamese imperial roll if given a choice (no cabbage, lots of garlic and black pepper please). but yeah I have a soft spot for some good greasy american style chinese food too...

This looks like the best egg roll ever! But if you live in California and you are not finding an egg roll that has more than just cabbage then you are not looking hard enough. Try pulling out your phone book and asking all the local Chinese restaurants what is in their egg rolls before you go visit them. The one shown here looks like the perfect one. That will save you time and money too.

I grew up eating orange garden eggrolls sometimes we would get eggrolls from Orange Garden and egg foo yong from Marks chop Suey and fried rice from a place up in Clark the put fresh peas and carrots in it I forgot the name of that place though. But the egg Rolls are amazing I wish they would freeze some and air mail them to me. Lol