In the land of the hot dog everyone has their favorite stand. Some people no matter where they live love a place like Gene & Jude's or Wieners Circle. Most people love the place they grew up near or lived by at some point in life. I didn't just give you a 2 for 1 dog special with Sam's and Sammy's because they shared the same name. Its because they are both excellent representations of neighborhood hot dog joints that have been serving several generations. Some things never change and it seems like the Chicago neighborhood hot dog stands that survive do that best. 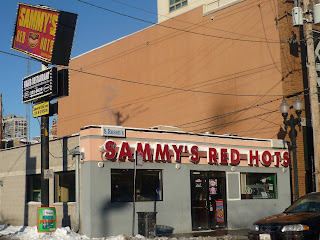 Sammy's has been around 30+ years and during the first thirty-three they were located at Clark and Division. Sammy's eventually moved to where it sits today three blocks west in the shadow of Cabrini Green. Sammy's does mostly a carry out business and with the invasion of the yuppies to the area now has delivery available. Sammy's is known for their Vienna beef hot dogs and Polish sausages served with some of the best fries in the city. I haven't been able to try anything else despite having gone here for over 15 years now. They also have burgers, beef, subs and a complete Chicago style chicken shack that offers over 15 combination's and also catfish, perch, jack salmon and shrimp. Hungry in the early morning? grab breakfast between 4a and 10a. If you need lotto scratch tickets and cigarettes, they got them too. Sammy's has been able to survive by offering great dogs and other great food options while keeping the prices low and the quality and consistency the same. Like Noreaga said on the track "We Ride" off R. Kelly's R. album "When I'm in Cabrini green you know I hit Sammy's" The same goes for me. 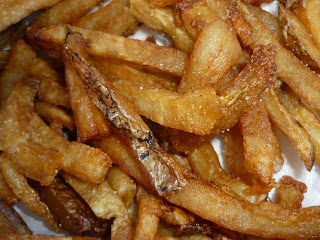 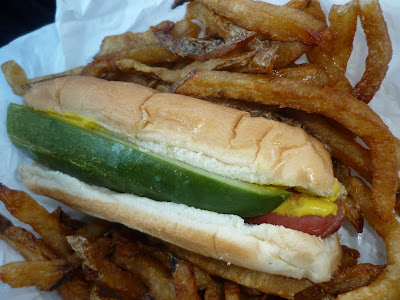 Sam's is on the corner of Armitage/Milwaukee/Western and does strictly take-out. That's because its big enough to fit two ladies who have been there since I was a kid and the supplies needed to make you a hot dog, Polish, tamale, fries and pop and hand it to you thru a sliding window. The dilapadated little hot dog hut has been there forever. That's the whole menu above, you walk up and order thru the sliding window, its simple and open late and is a favorite of many in Chicago. Its old and some would say everything about it is dirty but those people just didnt grow up in Chicago. 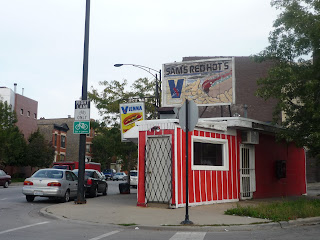 I came across this quote from Yelp! "If you're looking for the true Chicago style dog you won't find it here. "Everything" at Sam's equals mustard, relish, onion and sport peppers. Tomato, pickle, celery salt and poppy seed buns aren't part of the equation. It's still a solid, boiled Vienna Beef hot dog..." Let me start by saying that Yelp! is about as useful a site for food as ESPN.com is for driving directions. Everything about the place is old school buddy and since you obviously aren't from the city let me break it down for you. While the Chicago Style dogs like you mention have gained more nation wide fame since their creation by Vienna Beef (debatable but I believe they created it), the original Chicago dog is what's served at Sam's. Hot dogs come with just mustard, onions, relish and peppers. The Polishes are good but they only offer chopped onions so I always get a dog. The fries are the old school 50's style crinkle cut, they are frozen but when cooked crisp get the job done. Sam's is great for what it is which is a quick drive up/walk up meal at a great value. Its hard to spend more than $6 on yourself at Sam's. 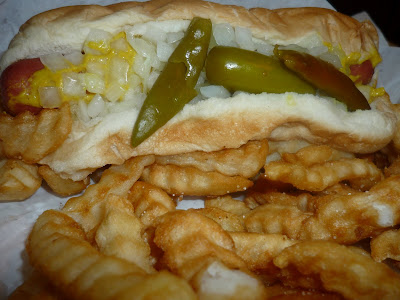 dog no relish from Sam's