Mack’s Golden Pheasant opened on North avenue in Elmhurst circa 1948. That makes it the oldest continuously run restaurant in DuPage County. It’s a straight shot from the city if you take North all the way west to Kingery Highway (83). You’ll see one of the best neon signs in Chicagoland when you arrive. I’d always been curious about Mack’s bc of that sign and the rest of the supper club vibes it gives off. The building is old and big and the food is Czech. Upon entry you’re greeted by a beautiful bar and a sign that says “No club colors or patches allowed on premises”. I can’t remember where I heard about it or confirm if it's true but there was said to have been a big brawl in the bar area between a couple of biker gangs back in the day. But it’s not a seedy hole in the wall you shouldn't enter without knowing people. The dining room is every bit a throwback as the rest of the property and it seems to draw big groups the same way supper clubs do, for celebrations and such. 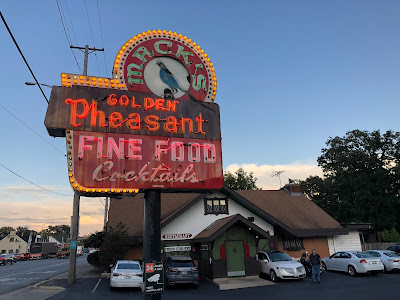 I’m not sure what the customer capacity is at Mack’s but it’s a big space that includes a large courtyard with outdoor seating. It’s actually one of the most peaceful patios I’ve dined on. The tables are lined up against the building and there’s a big yard with a well kept garden that extends all the way to the back alley parking lot entrance. Unfortunately it might’ve been the best thing about a meal I had there last year at this time. We stopped in to sip some Oktoberfest but ended up trying a Bohemian Pork Dip made with “thinly sliced” roast pork served on toasted dark rye with a thick gravy for dipping. It comes with an order of their popular French onion soup. It wasn’t bad but I was hoping for something closer to a Philly roast pork as far as the meat goes, it was too thick and the gravy had a pretty heavy viscosity. But it’s a classic spot with a peaceful outdoor patio and a lively bar area. 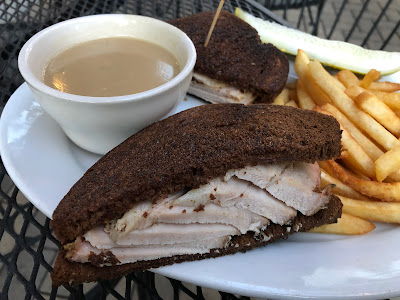