-Got Beef?
The Burgers of Chi (via NYC)

With the big money that backs restaurant groups these days it's common for popular spots in one city to open a location in another. One such example using Chicago is the opening of an Au Cheval in New York City. Well they recently sent us one back in the form of Mother's Ruin, a popular cocktail bar serving elevated bar food located in the Nolita neighborhood. The Chicago outpost is located on Milwaukee avenue in Avondale and it opened this summer to some seemingly welcoming crowds. 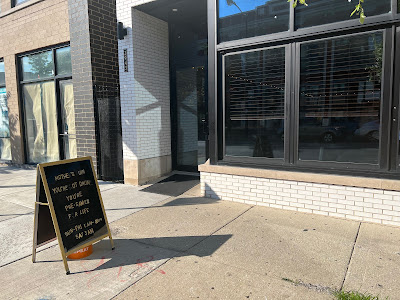 The vibe at Mother's Ruin is dive bar so maybe that's why they chose what seems to be a pretty random spot for a big shot cocktail bar from NYC. But judging by the crowds on my two visits it's location isn't deterring people from visiting. It's right on the edge of Logan which is home to lots of spots like it so there's plenty of potential customers for the all day bar and restaurant. As far as the drinks go they have about 10 signature cocktails one of which always comes from the slushy machine and a small beer and wine selection too. I've tried a few of those cocktails as well as the slushy and they're all pretty good. Meanwhile the food menu helps them to stay open all day as they do a daily brunch until 3p while also offering an all day menu from open to close. I was looking at the location in NYC when it was announced they were opening in Chicago and I was intrigued with their popular fish sandwich. That sandwich only lasted on the Chicago menu for a couple weeks as I was told it was tough for them to get a reliable supplier. But the bartender told me they were working on bringing it back as a special. Their double cheeseburger is also beloved so I ended up with one of them. 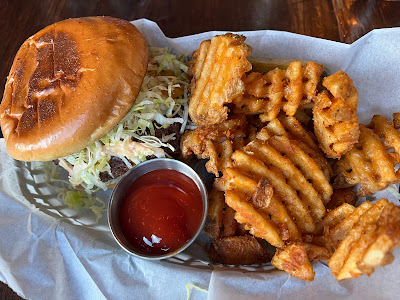 Double Cheeseburger at Mothers Ruin Chicago
NYC is known for having some of the best elevated burgers anywhere so there's lot's of competition when putting out a quality product. The burger at Mother's Ruin is a double cheeseburger similar in style to so many other trending burgers around town. Aged Cheddar, Shredded Lettuce, Onion, Pickles, and Secret Sauce give it some Big Mac Vibes as far as it's style goes. I thought it was very good and gave it a 7.5 when my friend asked me to score it on a 1-10 scale. That's basically a B on the report card and a B means it's very good. Not the best but definitely one I would return for. Although next time I might try their popular falafel burger or even the fried chicken sandwich which my friend said was an 8/10. Don't be too put off by the $18 pricetag as it comes with Old Bay waffle fries and is much bigger than your typical double cheese. Overall it's a fun vibe inside and I hope more spots start to open up around that area of Avondale which has been pretty quiet for a while now. 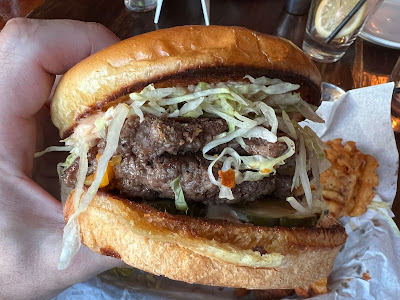