The 2200 block of California in Logan Square has has seen a bit of a renaissance over the last year or two. It started with Lardon, an all day charcuterie and sandwich shop at the corner of California and Palmer. The most recent addition to the block sits in the same building as Lardon and comes from the same restaurant group. Union opened this past February. It’s a short five minute walk from where we live so we walked over this past weekend which was a perfect one weather wise. 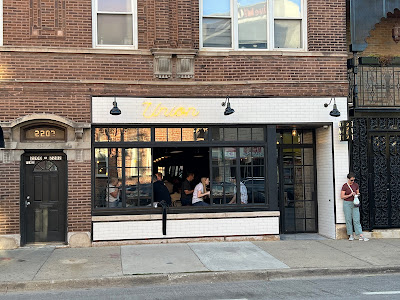 While Union isn't anything new to the neighborhood it's the type of spot that would be a welcome addition anywhere. They sport a killer beer list with a Midwest focus and I like that all the taps can be ordered in half or full portions. There's no outdoor dining but the front windows will be open if it's nice outside. Seating is mostly communal and or at the bar but there's a handful of tables for groups. 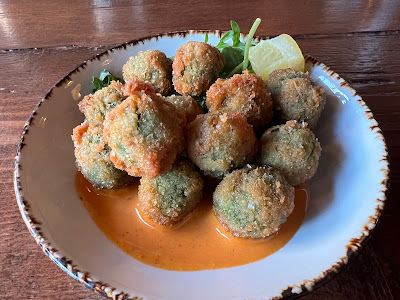 The current menu is labeled as "Spring 2022" so I would assume that it switches up with the seasons. But I would also assume that the fried olive appetizer stays on the menu in it's entirety. These are the perfect snack if stopping for a beer and also a great way to start your meal if visiting for dinner. The olives have a little piece of mortadella inside and the sauce compliments them perfectly. 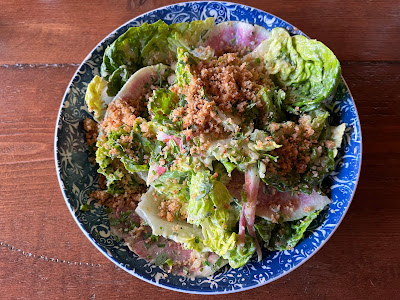 Salad season has arrived and the menu at Union offers some tempting options. We settled on the Spicy Baby Gem on the rec of our waitress and she picked a good one. This one was spicy and crunchy and just right for what was an unusually hot May day. The current menu has six options for your main course with the pan roasted black cod falling in the middle as far as pricing and portion size. It's served with shredded root vegetables and green beans in a puddle of pancetta broth. The fish was perfectly cooked while the broth was pretty much on point. Not bad for a meat forward spot. 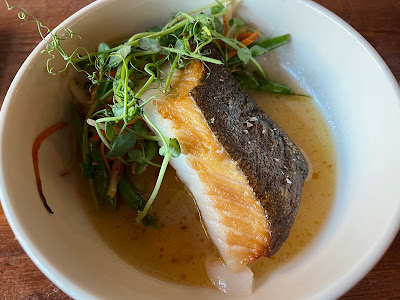 I'm not sick of smashed burgers and I still prefer them to the thicker options but sometimes you just want a big and thick and juicy burger like the offering at Union. Its made with an 8 ounce patty of ground brisket and comes topped with two year Wisconsin cheddar as well as house fried onion strings and bone marrow aioli. It comes on a brioche bun that was slightly thicker than others as in not as light but it all worked really well. I'd give this one a solid B+ grading and with the plus being earned by a side of smashed yukon potatoes that come out quite crispy and are included with your burger. There's a papas bravas appetizer made with the same potatoes and comes with a tasty coppa spice aioli which I requested as a side with my burger. For dessert a blood orange parfait type dish was a nice ending with the weather so warm. It's great to have Union around the corner. For both booze and food. 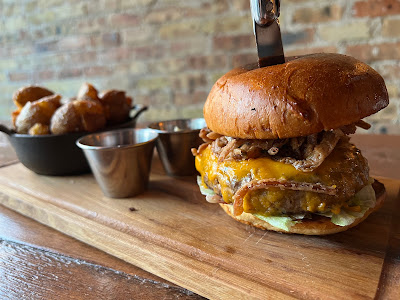