For those that may have noticed a slow down in posts there's a reason behind that. I too have slowed down and if I'm being honest so has the growth of Chicago's food scene. But this isn't a problem exclusive to this city, it's in fact a national trend. Why? There's never just one reason for something like this but a few of them include the fallout from covid, capitalism, and the lack of originality paired with most everything having already been done. The last of those three is driven by nationwide trends in food. It's one thing when an entire cuisine starts to get more love and you see more spots serving it but it's another thing when one dish becomes so popular you start to only see it everywhere. As an example poke was one of the first national trends to really exemplify these food fads that don't seem to go away. You can find poke at the grocery store in a random Midwest town these days and places like Mammoth Poke on Western avenue in Bucktown are still opening. Hot Chicken is another one. 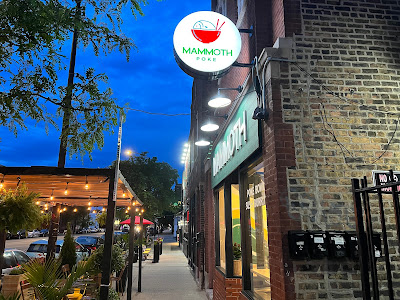 It's important to first note that poke is a trend in the lower 48 but it's long been one of Hawaii's most iconic dishes. It shouldn't need to be said since it's seafood but the poke you get in Ohio is nothing like the stuff you get in Oahu. So why am I posting about a new poke spot in a place that's a nine hour flight from Hawaii? Well that's a fair question and the answer to it is bc I was recently walking by and I wanted to get some food but I didn't want to go home and drive plus I had already ate Chingon across the street earlier in the day. Also bc I wanted something light as in not fried or extra meaty so I settled on a bowl of poke which I hadn't had in at least three years. The process of ordering and receiving my bowl took about two to three minutes and it was customized to my liking. It was exactly what I thought I was getting. It's the Chipotle model which has been applied to almost everything in food these days and it plays particularly well with poke which is why it seems to be sticking around. 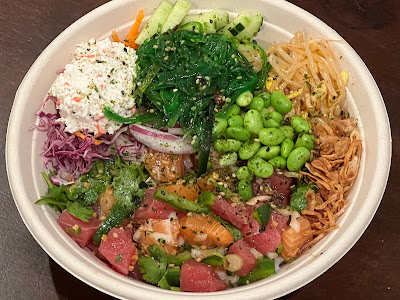