-Grubbing in Chicago
Michelin Star Dining in the West Loop

Chicago's fine dining scene remains one of the best in the country. There's handfuls of spots that can contend for the city's best dining experience which is telling of a strong scene. Elske is of those spots commonly mentioned when Chicago's best restaurants are discussed. The Scandinavian inspired hotspot has been nominated for and won many awards including the earning of a Michelin star. 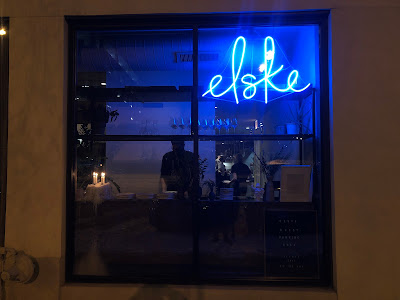 Locals Favorite in the West Loop
This was actually my first trip to Elske which I'd wanted to check out long before covid arrived and shook up the restaurant industry. There were two instances when I had made reservations weeks in advance including one for this past New Years Eve but I ended up in Florida for that and also had to cancel another one a couple years back. On this visit I was able to get a reservation on the day of which was surprising but maybe not when you consider the pandemic isn't fully over. Elske is said to have one of the city's best tasting menu experiences and it looked really good but we both thought the ala carte items were more so our style. So to start, an order of cured hamachi covered with a long strip of kohlrabi. Underneath was pristinely cut yellowtail with summer pickles and toasted kombu. 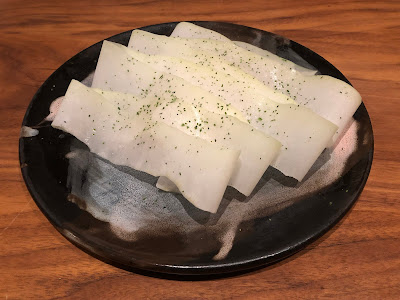 Cured hamachi with kohlrabi, summer pickles, and toasted kombu
I've been really into risotto lately which I've been cooking up at home pretty regularly. Looking for some inspiration for my next go around with it we ordered Chef David Posey's offering which sounded super fancy. This one was made with celeriac, apple, hazlenuts and black truffle. Perfectly al dente rice was nice and creamy and there was some sort of gravy that really took it next level as far as risotto goes. We also had to try the pasta offering which had some mac and cheese elements going on. Zucca made with annatto is tossed with egg and served over kabocha and covered in pecorino. 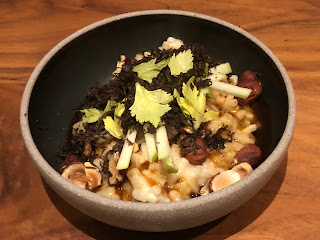 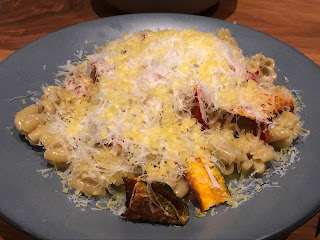 Risotto and Pasta at Elske
While all the dishes we ate were pretty great it was a couple of the fish offerings that really stood out. I enjoyed the Midwest elements at play in each of them with a perfectly cooked piece of black bass being topped with celery giardiniera sitting atop a rolled piece of kohlrabi holding beans and shrimp inside. It'll go down as one of the most satisfying fish dishes I've ever tried. Our server said her favorite dish from the current menu was a plate of perfectly fried whitefish sitting atop braised kale surrounded by a creamy foam of sorts with mushroom escabeche. An excellent recommendation. 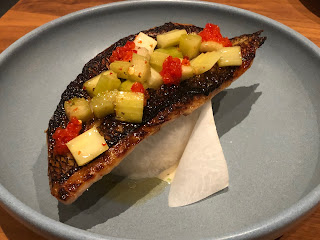 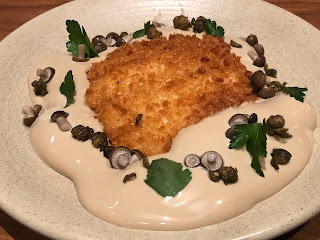 Fish Dishes at Elske
I'm down to order the pork collar pretty much anytime I see it on a menu. It's always a hit at what tends to be Thai restaurants. But Elske does live fire grilling so it was without question the dish I was most intrigued with when we first looked at the menu. The collar of the pig is a muscle that runs from the jowl through the shoulder and extends into to the loin. It's called the "money muscle" in barbecue competitions. Pork collar always works really well with smoke which was the case here. There was some sort of glaze that was a bit over-salted but a side of black garlic glazed sunchokes and shaved chestnuts tamed down the overpowering salt. This was decadent and had me near food coma status. 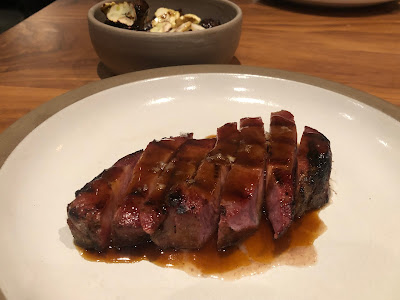 Pork Collar with with black garlic-glazed sunchokes and shaved chestnuts
But first dessert! We ordered their "since day one" offering which is described as "Sunflower seed parfait with sour honey, licorice, and bee pollen." I had no idea what to expect from the description but if it's been the menu the entire time it's got to be pretty good and it really was. I could eat that every night right before bed knowing if I croak while sleeping my last bite was a real winner. The kitchen also sent out their other dessert offering which was a blend of coffee and coconut milk sorbets with amaro baba, and buddha’s hand (a citrus plant). It too was a winner though I could only finish the sorbet portion as the wife had already checked out for the night. Both of us left happy and full so don't worry about having to go get tacos after running though the ala carte options at Elske. I'll be back. 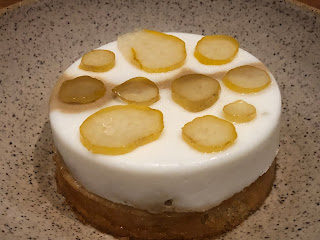 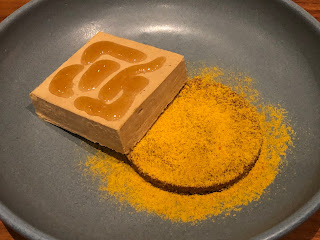