-Grubbing in Chicago
A Thai Supermarket in Uptown

As I've mentioned before 2021 has been a big year for Thai restaurant openings. While the city's Thai restaurant scene is by no means new it keeps getting better. I feel like today's stop is a big part of the recent boom. Talard Thai Market is new but not brand new. It opened on Broadway in Uptown in Nov. of 2019. It was opened by a couple of Bangkok natives that met in Chicago. Mike Sula was on it early and you can check out his story for the Reader HERE. As noted Chicago has had a good number of Thai restaurants for a while now but this is the areas first newly opened Thai market in over a decade. 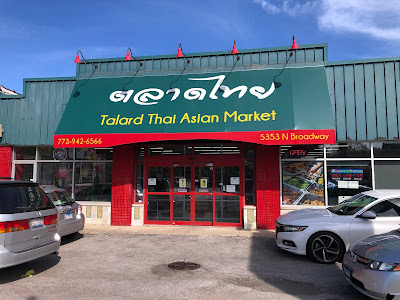 Locals Favorite in Uptown
From a market standpoint Talard is the first spot you should check when in need of Thai ingredients of any sort. If it's common in Thai cooking or a product from Thailand they're more likely to have it here than anywhere else around town. Local cookbook author Leela Punyaratabandhu is mentioned in Sula's piece as she's written two of the best Thai cookbooks you can find in English and is also the person behind the blog SheSimmers where she shares with the world some of her favorite Thai recipes. If you're looking to get into Thai cooking her work is the first stuff you should look at as far as research. After that you can head over to Talard bc you're going to want to try and make it all. 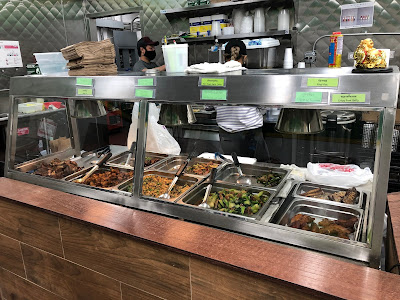 If you're more interested in leaving the Thai food to the Thai cooks around town don't fret bc Talard also boasts a cafeteria type setup in the back of the store. In Thailand this setup is called a khao rad gang and it's similar to a meat and three cafeteria of the American south. If you visit on the weekend they have more than 20 home cooked Thai dishes ranging from morning glory curry to rotating specials like Khao Kha Moo aka stewed pork leg. This is a dish I immensely enjoyed in Chiang Mai at the world famous "Cowboy Hat Lady" stand. I have vivid memories of a meal there which I partook in with a bunch of Chinese businessmen. Though we didn't speak the same language we communicated through our enjoyment of the food we were eating. Those memories were triggered when eating this. 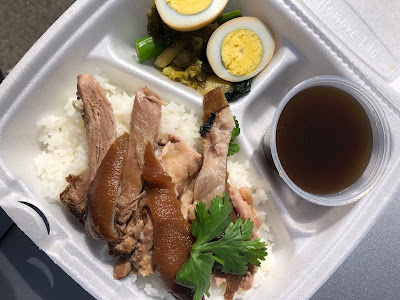 Khao Kha Moo at Talard Thai Market
On the same visit I got the stewed pork leg they were also making Khanom Tokyo (Thai style Dorayaki) to order. These too brought back memories of our trip to Thailand as there's a famous stand in Bangkok called Mr. Tokio that sells this popular street snack that's enjoyed by all. It's a made to order thin flat pancake that's wrapped around either a sweet or savory filling. A Thai adaptation of Japanese Doriyaki. I enjoyed the sweet custard cream and the savory sliced hot dog equally. The opening of Talard Thai Market has brought easier access to hard to find Thai ingredients and with that it's taken the city's Thai food scene up a notch into the echelon of the likes of LA and Las Vegas. 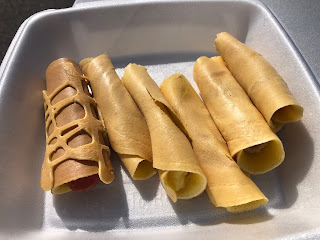 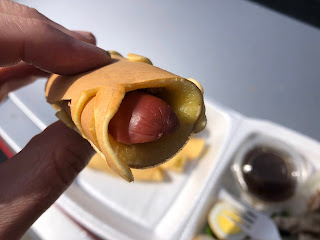 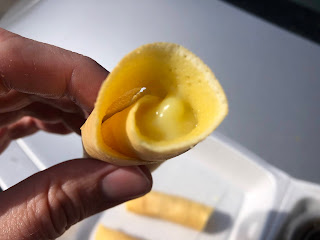 The steam table is excellent, as is the selection of ready made meals in the cooler. Loved coming by here.