I got a chance to try one of the more anticipated recent openings in the Wicker Park area. Dr. Bird's opened a few weeks ago in the old Burger King space on Milwaukee between Ashland and Division. According to interviews with Eater this is the project of some siblings who grew up in a Jamaican restaurant in Buffalo, NY. They chose Chicago as a second home of sorts but it's a project all it's it's own. Dr. Bird's is a full fledged sitdown spot with a liquor license (and homemade juices) but they wanted to bring Jamaican patties to the area too so it's also a great place to grab a bite on the go. 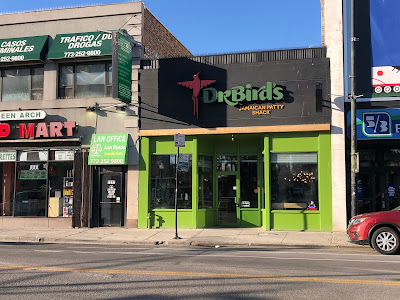 Newly Opened in Wicker Park
So first things first let's quickly introduce those who may not have had the pleasure of enjoying a Jamaican beef patty. It's not the official dish of Jamaica (jerk chicken) but it's one of it's most popular for sure. Jamaican beef patties are the perfect snack and found all over the island and anywhere else there's a heavy Jamaican population. But up until now Caribbean American Bakery on Howard was the city's only Jamaican patty specialist. According to Wikipedia "The beef patty is a product of the long history of Jamaica, mixing pasties introduced by Cornish immigrants and cumin, curry and cayenne pepper introduced by Indian indentured labourers and African slaves who arrived to the country. The firecracker taste of the Scotch bonnet, a hot pepper indigenous to Jamaica, sealed the flavour." While Jamaican patties don't always include beef it's by far the most popular filling and Dr. Bird's makes both a regular beef and a spicy version too. They also do a chicken, spinach, and veggie patty and have the option to stuff one in some coco bread and add cheese. I'm very happy to have these a bit closer to home. In Jamaican heavy communities like Toronto and South Florida it's common to show up with a bakers dozen beef patties the same way you would with a box of donuts. 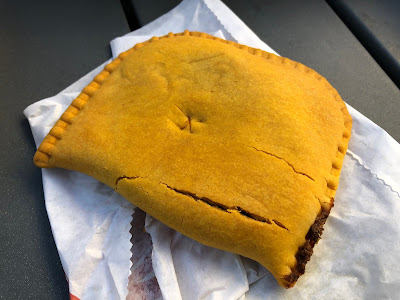 Jamaican Beef Patty at Dr. Bird's Jamaican Patty Shack
The rest of the menu is pretty interesting and possibly limited for now. But options like wood grilled cornish hen, jerk shawarma roti, rasta pasta, and Kennebec cut curry fries were all items I picked up last weekend. Starting with the roti I was thinking I was getting a Trinidadian style roti (dhalpuri style wrapped like a burrito) with some jerk chicken shawarma but it wasn't quite that. This was a paratha roti and that was explained on the menu so that's on me. Nonetheless this was a delicious bite that might have suffered a bit in transportation but that was expected. It's served open faced but you can still wrap it up and eat it like a burrito. You can choose (two) from of a handful of fillings to pair with it such as pickled onions and cabbage which is what my choices were. The jerk chicken shawarma seemed to be exactly what it sounds like in that it was cuts of meat that would have seemed to come from a cone spiced with Jamaican flavors opposed to Middle Eastern. Options like jerk shrimp, steak, salmon, and even wood smoked jackfruit are also available served over a paratha roll. 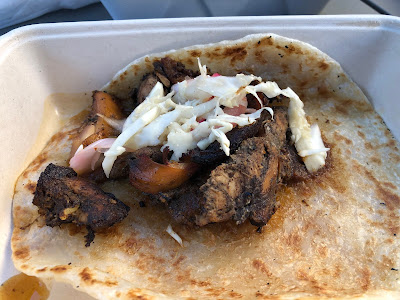 When I first saw the menu for this place I thought it reminded me of some of the many Jamaican restaurants in Toronto due to it's inclusion of rasta pasta on the menu. This dishes origins are in Kingston but it's popular at Jamaican spots in and around Toronto. But you don't really see it at many of the Chicagoland Jamaican places. It's described as an herbaceous and cheesy pasta given the name 'rasta pasta' due to the red, gold, and green toppers. It's popular with vegans but the option to add meat or even jerked jackfruit is there. We tried it with the shrimp and it was a pretty good dish that tasted as described. If you like pesto pastas (I'm not the biggest fan) you'll enjoy this dish. 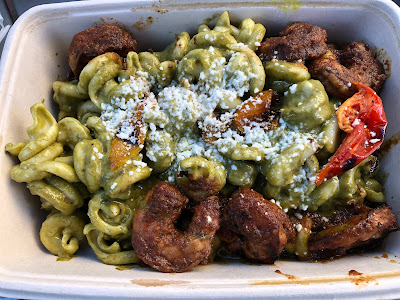 Rasta Pasta at Dr. Bird's
I was a bit surprised to see they were doing cornish hen as opposed to regular chickens but you got to play to your neighbors I guess. Still this was pimento wood smoked jerk hen which the menu say's is the way it should be. That is indeed the case and my thing with jerk chicken is it's always harder for a spot that doesn't do just jerk chicken to make it really well. There needs to be high turnover so the chicken doesn't dry out bc it also cant be cooked to order without making people wait a rather long time. The Cornish hen at Dr. Birds was still pretty good but they clearly don't have the demand just yet that allows for a juicer product to be served. I still thought this was better than a lot of the jerk chicken around town but it's the beef patties I plan to go back for very soon. I'll probably try the jerked whole wings next time too and maybe even a jerk taco which is also on the menu. Cards only for now. 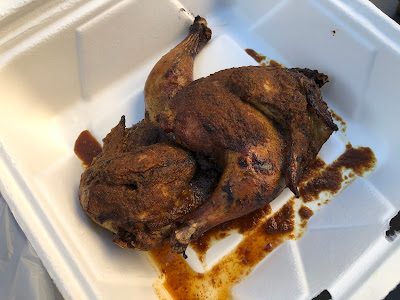 How did this compare to Three-D's jerk chicken?

Thank you for trying here. !=)}
I have transferred from the Blue Line "L" to the Ashland bus here many times. Including a most recent time where I noticed it was opened, but went to another (Mexican) venue south of here instead.