For those folks that follow along on social media, you may be familiar with today's post. That's bc towards the end of 2020 I posted a thread to twitter sharing some of the best new (to me) tacos in town. Despite 2020 being a crap year all around there was still some really good tacos to be found. Perhaps none more hidden than those at Asian Cuisine Express - a takeout joint in Little Village. 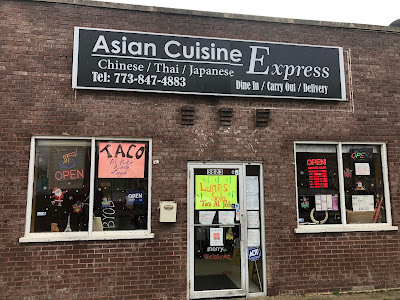 I got turned onto this hybrid Asian joint by a friend in the social media-sphere. He knew it would be my type of place and that it is. The restaurant itself is maybe a year or two old. I remember driving by before they opened and noticing it. The menu offers all the typical American-Chinese favorites and also has some Japanese dishes and then there's the reason we're here. Asian Cuisine Express hosts what might be the city's biggest spinning stack of meat. At least if you visit when it's not winding down for the week. It's a great little setup in that the ladies that run this place either pay the taquero to serve tacos here or he rents out the spot. I'm not sure which one but the taquero himself runs a taquizo business and can be found @taquizas_los_primos on instagram. The first questioned I asked myself when I learned of this mashup was "Al Pastor Fried Rice?!" and the answer is yes! Sushi al pastor too! The latter of which needs to be ordered a day ahead with a minimum of five rolls being ordered ($12/each). I have yet to try the sushi due to having nobody to share five rolls of it with (he sent me the pics). I'm putting in an order as soon the world is partying again. The Arroz Frito con Al Pastor is exactly what it sounds like. Chinese style fried rice made with chunks of fresh shaved al pastor mixed with some pineapple on top. YES. This in my experience is avail for takeout in individual portions. 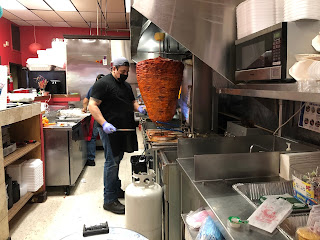 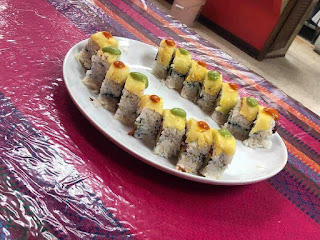 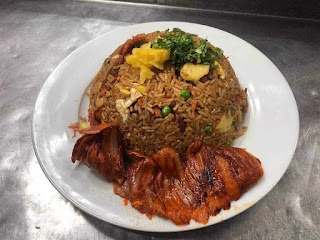 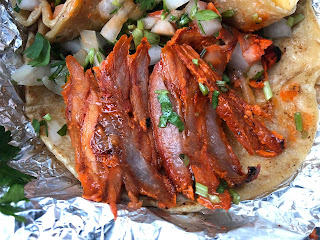 Al Pastor at Asian Cuisine Express
I named the tacos al pastor from here the best new tacos in town for 2020.The first time I walked in here I was greeted by the biggest cone of meat I’ve seen in Chicago. Good start. I ordered up some tacos and watched the taquero flame it up before rotating the cone a few times to get it cooked. Still looking good. When the edges crisped up he sliced it thin straight into a tortilla and flicked pineapple on top. All I needed to see as far as knowing these were the real deal. That’s exactly how they do al pastor in Mexico City where it's one of the city signature snacks. No trips to holding bowls and hot flattops here. There's an art to making great al pastor and at the good spots that's about all they do. This means constant traffic which means the cone is always up and running and being sliced to order. It's not impossible to find al pastor like this in Chicago but it's certainly not the standard. Visit on Monday's and tacos are just $1 (closed Tuesday). I asked the lead taquero where he learned to make al pastor and he told me Veracruz. Yeah I'm def doing a taquiza this summer. Visit their insta for info. 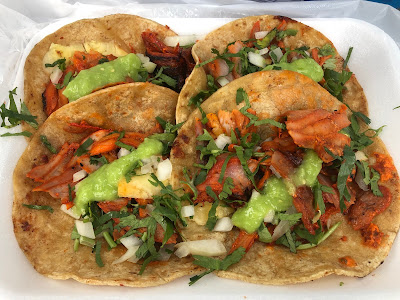