-Grubbing in Chicago
Pho and Pizza Puffs on Ashland

The city saw a little rush in restaurants opening by younger Asian chefs late last year. I've mentioned in previous posts how the next generation of restaurateurs are opening spots where they specialize in the food of the chef/owners youth. When Phodega opened on Ashland just South of North avenue in Wicker Park they become one of the few spots to find pho outside of the Argyle area of Uptown. 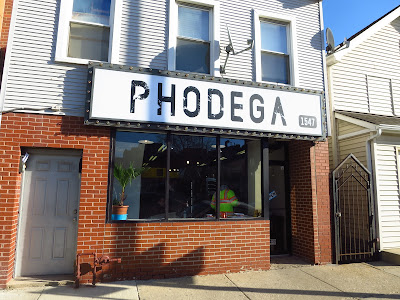 The Phodega name is a mashup of pho and bodega. The two young co-owners of Phodega wanted to create a unique take on the neighborhood bodega. So aside from a small menu that focuses in on Pho and Hainanese Chicken Rice they also stock the walls with groceries you might find in a bodega. Aside from toilet paper and such they also sell Asian snacks from countries like Japan and Korea. Items usually found at the Suburban Asian grocers in the city's Northwest suburbs and such. 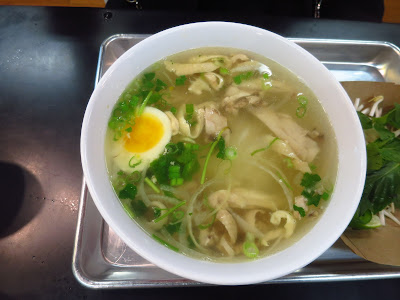 Phodega make two types of pho using one of the owners old family recipes. You can get Pho Bo (beef) or Pho Ga (chicken). My wife very much liked the chicken and you can say the same for me with the beef. One thing a good bowl of pho must have going for it is the temperature itself. Some spots cant figure out how to serve you a steaming hot bowl. Phodega delivered on that end. The other thing I think is essential is the freshness of the plate of herbs served with your bowl of pho. Phodega had fresh basil, mint, bean sprouts, jalapeno, and lime. The latter two let you decide how you want to personalize your own bowl. I like to throw it all in there. The broth was clean while both the sliced ribeye and brisket were tender. I'm usually not a fan of the Vietnamese beef meatballs found in pho but these were appealing. There was a nice amount of rice noodles too. A very satisfying bowl. 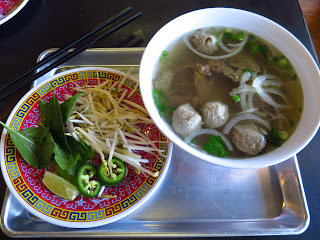 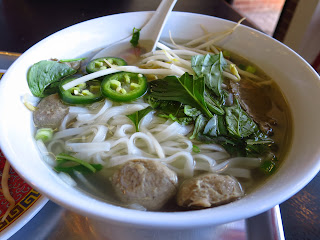 I returned with my wife a few weeks after my initial visit. That time I decided to try the chicken combo plate featuring both Hainanese Chicken Rice and fried chicken. The chicken rice recipe comes from one of the co-owners moms who is Singaporean. Chicken rice has become very popular over the years and is found at more and more spots outside of SE Asia where each country has their own little version. It's a simple dish made from poached chicken which when made also makes the stock which the rice is then cooked in. Most spots will serve it with a bowl of the broth which diners can use to dip both the chicken and rice. It's Asian comfort food at it's finest. Phodega makes a pretty good batch and it pairs well with the fried chicken though I would've liked a bit more. As you can see in the picture below I got about a half of a thigh worth of fried bird. The rice / broth were excellent together. If you don't like Vietnamese comfort food they also sell pizza puffs, instant noodles, and rolling papers. 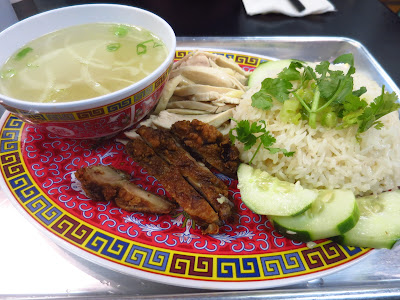 I found several good reviews about XAP CREDIT SOLUTION on different blogs and sites. Initially, I was pessimistic but out of determination and curiosity, I emailed X A P C R E D I T S O LU T I O N @ G M A I L . C O M. They explained the process and everything needed to fix my credit. My FICO now is795, they cleared all the negative items on my report, the eviction and judgement weren’t left out and XAP also added great tradelines to my report.  Send XAP a message if you have any questions or you need their services.

I consulted with RAYLINK CYBER SERVICES (RAYLINKCYBERSERVICES@GMAIL.COM) early this year when I first started a career in the oil and gas industry. I was hesitant at first like a lot of people may be when considering credit repair services but to this day I’m glad that I decided to trust them with their services and knowledge. I was irresponsible with my credit in my early to mid-twenties. There I was in my late twenties making good money but my credit wasn’t up to enough and I realized that it was time to do something about it. They took care of my credit quick and kept me up to date with everything that was going on along the way. They coached me on the do’s and don’ts during the credit repair process and I followed. It felt great to start over to work on building a strong credit history. I had a great experience and learned a great deal with Raylink Cyber service and honestly wish I had gone through with the services sooner than I did. I strongly recommend Hack West Credit Repair to anyone out there that may be considering to fix credit. You won’t be disappointed and you’ll thank yourself later.

Hello everyone, do you intend on repairing your credit? I know a
credit repair professional that can handle it perfectly without issues, and that is TROVIAN CREDIT SPECIALIST, their job is fast and 100% legit. The Judgment, eviction, and bankruptcy on my credit profile were removed, they also cleared my credit card debts within 6 days, they really helped me and I am so grateful to them. I give them a 5star rating for their services. You can message them on: TROVIANCREDITREPAIR @ GMAIL . COM +1 (424) 307 4562. insist you go for the best