Is it just me or do sandwich shops pop up in threes? Quite a few new ones to check out around town. The first of which is JT's Genuine Sandwich Shop on Elston. It sits in an old Nancy's Pizza space. The owner is from the Quad Cities area and now lives with his family in Chicago. The JT's name is the combination of the first letter of each of his two kids names. The concept is regional sandwiches with common favorites like fried chicken sandwiches and burgers. There's a big Midwest presence. In case you missed it I recently did a feature of JT's Genuine Sandwich Shop for Chicago Magazine. 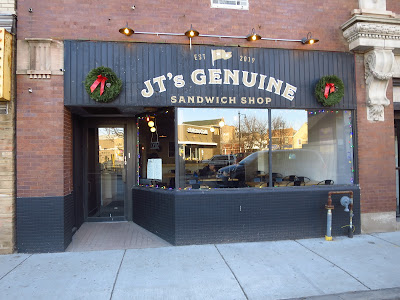 I've been to JT's three times now as it's a quick ride from my house. In that time I've basically got to try everything I wanted to try after checking out the menu when they first opened. While I haven't had everything, everything I've had has been really good. Even the chili which I normally avoid elsewhere. It's a hearty blend with beans but there aren't too many. Perfectly spiced and topped with fritos, cheese, sour cream, and green onion. It's really well done. Try it on a hot dog, fries, or as is. 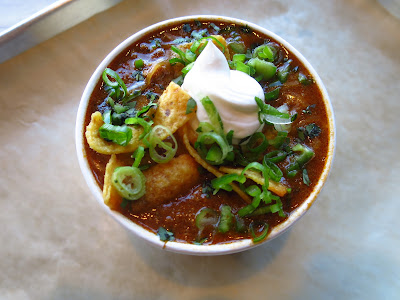 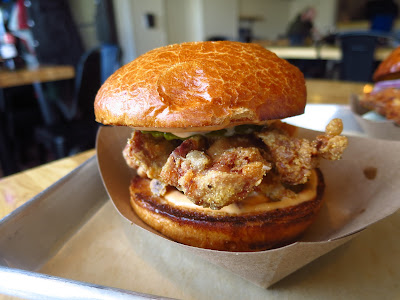 The menu item drawing the biggest buzz from online food commenters is the Italian roast pork with greens. This is a nod to Philadelphia where locals love this sandwich as much if not more than the cheesesteak. I've had a roast pork from a couple of the famous Philly spots and it really is one of the best regional sandwiches in the world. It's similar to Italian beef in that it's thinly sliced roast pork that sits in a gravy and goes into a roll with provolone and comes served with or without broccoli rabe. You can get the sandwich dipped in the pork's gravy if you like it wet. I've also had this sandwich at a few spots outside Philly and it's never quite the same. JT's gets credit for best effort of any of the spots outside the Philadelphia area. It wasn't perfect as I thought it was light on meat and needed more juice soaked into the bun but nonetheless it was scarfed down and enjoyed. The bread comes from nearby Tony's Market which was surprising to me. It's worth using if you make sandwiches at home. 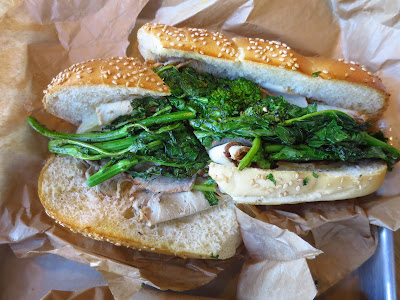 There's even an international offering in the Steak & Potato sandwich. JT's takes the Midwestern favorite of steak and potato and puts it all in a sandwich with Argentinian flavors. Char grilled skirt steak is diced up and loaded into a Tony's Roll with handfuls worth of fries and chimichurri sauce mixed with truffle mayo and manchego cheese. It eats like it could be a Midwest regional specialty. 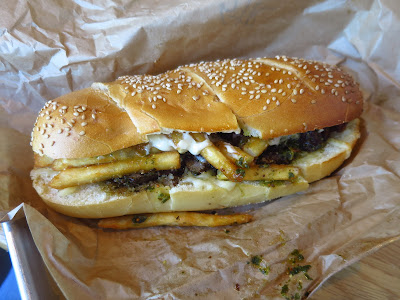 As mentioned the owner Chris Cunningham is from the Quad Cities region. So no surprise to find perhaps their two most well known regional sandwiches taking their rightful place on the menu. The first is the loose meat aka Maid-Rite aka Tavern style sandwich. I've posted about these before (recipe HERE) and am on record as enjoying them. As best described they're a Sloppy Joe without the slop which really just makes them steamed cheeseburgers without the patty but rather a bunch of loose meat. JT's sells what has to be the country's most expensive loose meat sandwich at something like $6.95 but this isn't Sioux City. Ask any Big Ten transplant about living in Chicago and they'll mention the rent is double what they're used to back home. JT's makes a traditional loose meat and I enjoyed it though I thought the bun was a bit too fancy. The cheaper the white bun the better for these. 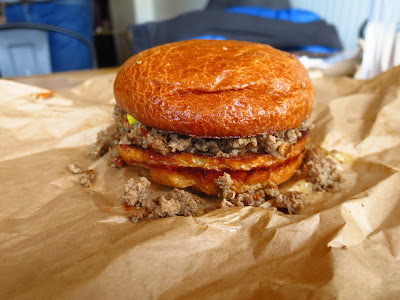 Then there's the BPT aka Breaded Pork Tenderloin. Perhaps the country's most polarizing regional sandwich. One both Iowa and Indiana like to claim but it's also very popular around Kansas City and Central Illinois. Some people out there find this sandwich to be extremely bland and even flat out avoidable. I'm on record as liking a good one when in Rome. Problem is there's definitely more bad ones than there are good. Just like anything else really. But I still contend when well made they're as enjoyable as a fried chicken sandwich which while boring in and of itself can still be good. JT's takes no short cuts with their BPT. They slice Iowa pork to size which isn't the comically large pieces you'll find down at some Indiana spots. It only overlaps the bun by a couple inches. But it's buttermilk brined and fried to order which makes it extremely tender and also hot which is contrasted by the cold pickles, onion, mustard, mayo, and lettuce. It's a fine sandwich and at just $6.95 it's a steal. 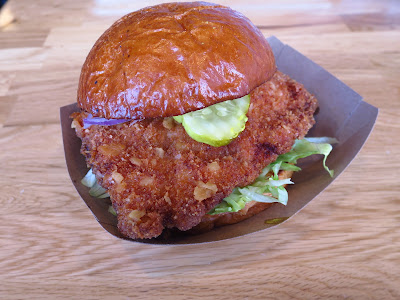 According to Stanford Medical, It is in fact the SINGLE reason women in this country live 10 years longer and weigh on average 42 pounds lighter than we do.

(And by the way, it has absolutely NOTHING to do with genetics or some secret diet and absolutely EVERYTHING related to "how" they are eating.)

A GREAT SPELL CASTER (DR. EMU) THAT HELP ME BRING BACK MY EX GIRLFRIEND.
Am so happy to testify about a great spell caster that helped me when all hope was lost for me to unite with my ex-girlfriend that I love so much. I had a girlfriend that love me so much but something terrible happen to our relationship one afternoon when her friend that was always trying to get to me was trying to force me to make love to her just because she was been jealous of her friend that i was dating and on the scene my girlfriend just walk in and she thought we had something special doing together, i tried to explain things to her that her friend always do this whenever she is not with me and i always refuse her but i never told her because i did not want the both of them to be enemies to each other but she never believed me. She broke up with me and I tried times without numbers to make her believe me but she never believed me until one day i heard about the DR. EMU and I emailed him and he replied to me so kindly and helped me get back my lovely relationship that was already gone for two months.
Email him at: Emutemple@gmail.com
Website: http://emutemple.website2.me/
Call or Whats-app him: +2347012841542