If you needed further proof google has passed up yelp for restaurant reviews check out today's stop. It's got 51 Google scores/reviews while no one has said anything about it on yelp. Aside from it's name Antojos Poblanos El Carmen caught my eye with it's listing of dishes served posted onto the windows. When I looked it up it didn't take long to realize it was a gem based off the menu and pictures of the food. Google had plenty of pics on offer and while you cant judge a dish based on how it looks you can tell in many cases the type of food they're cooking. Here that's Poblano dishes. 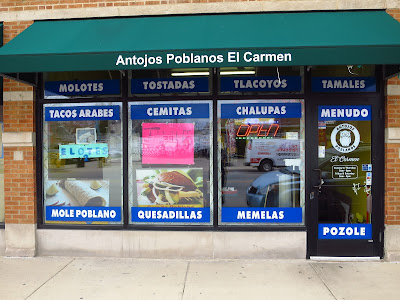 Poblano style cooking being food from the Puebla region of Mexico. I've noticed an uptick in it around town. Perhaps none more worthy of a shoutout than this place. It's helmed by a mother who seems to do all the cooking. Of course based off the recipes you'd guess she hails from near Puebla and you'd be correct. The first few things mentioned when discussing food from the Puebla region of Mexico are both Cemita sandwiches and Tacos Arabes. El Carmen makes both of those. I tried a Taco Arabe which will never be as good over here as it is down there but still I liked this version alot. She didn't have a spit of meat up and running but the pork was shaved really nice and thin and crisped up well. I can never tell with the tortillas for a taco arabe which should be thicker than flour and almost pita like but I think this was just that. I've never seen anything like them in stores so I assume they too are homemade. This taco was basically the size of two and a nice snack if just looking for that. 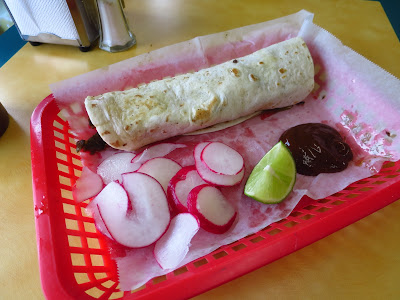 The food of Puebla has always been some of Mexico's most fascinating. Old world technique and ingredients blend with more modern European influences going back to the Battle of Puebla in 1862. Take for example the Molote. These are a regular in Puebla home kitchens. They're also a popular street food as a simple search of "Molote + Puebla" suggests lots of spots there specialize in them. The closest comparison for the Molote might be the Venezuelan empanada. Large submarine like pockets of masa are fried with a variety of ingredients inside. They're then doused with different sauces and salsa before being eaten. El Carmen will make you a molote with just about anything. I recommend trying the chorizo and potatoes or something else with cheese. Muy bueno. 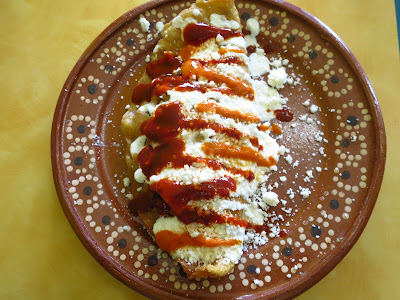 A chunk of the menu here consists of antojitos made with masa by hand. The humble Tlacoyo has started popping up more and more in Chicago. Born on the streets of Mexico City it's made it's way all across Mexico and Carmen makes a beautiful version. All of the antojitos made of masa come with your choice of sauce (green / red), no sauce, or "bandera" style which means flag and consists of both red and green. Another delicious treat worth trying are the Jarochas/Infladas. While most of us have heard of and enjoyed a gordita how many of you have tried the fried version? Infladas are fried and puffed up gorditas. They might as well be called the Original Puffy Taco. When fried they inflate (hence the name) and once removed from the fryer they're slit and typcially filled with refried black beans. It's funny bc all of these masa snacks are very similar in ingredients though a bit different in both tastes and texture. Safe to say that Carmen is an absolute master of the masa. 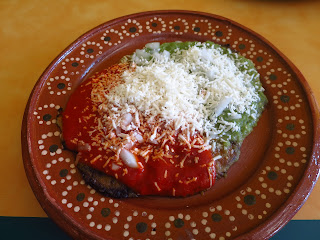 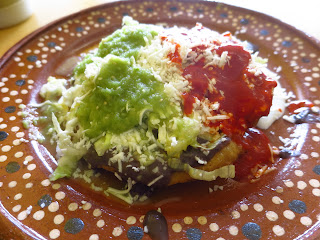 The menu item that let me know this place was the real deal is the Memela. At their most traditional  these are griddled cakes made with masa and topped with different ingredients be it meats and or sauce. They're very popular in Oaxaca which also has its origins in pre-Hispanic food. They're basically thicker and wider corn tortillas. Similar to both sopes and huaraches but ingredients used on those tend to be different. Then there's the Puebla version of the Memela. Different from all others in that the corn masa is filled with refried beans before being cooked to a crisp on a comal. It's then painted with your choice of red or green salsa and topped with whatever typical taco fillings you may want. That said you don't need any meat as the crispy cooked masa holds some wonderfully fragrant black beans which when paired with the salsas and fresh queso makes for magic. I've had a ton of memorable dishes this year and this is one I keep coming back to when asked "had anything great to eat lately?" Other popular Puebla dishes like Mole Poblano, Envueltos (mole poblano enchiladas), Tacos Placero, Chalupas, and more can be found on the well rounded menu. A gem of a stop. 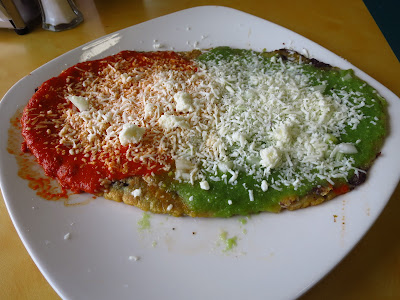