As 2018 comes to a close it will be fun seeing the 'Best of' lists that come with it. I thought it was a pretty good year for openings. For the first time in a while it seemed as though the more buzzed about openings were not steak houses. In fact if you go back and look at most of the acclaimed restaurants that joined Chicago's scene in 2018 most of them are focused on non-American menus. A few of them even go as far as fusing cuisines in a well thought out way. Funkenhausen is the most recent to do so. They call themselves a German restaurant with Southern hospitality or something of the likes. 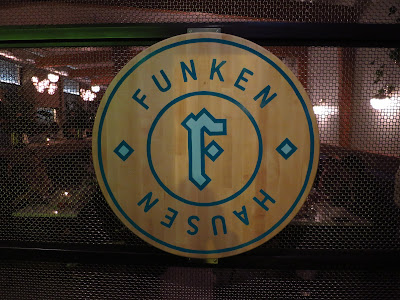 Funkenhausen is Chef Mark Steuer's vision of a German beer hall. I read somewhere that it was personal but not too serious which is exactly the type of spot I like to check out. I'm not the only one who's done so as reviews from the likes of the Tribune, the Reader, and Chicago Mag have all been published. So I'll leave the professional stuff to them and give a few thoughts of my own over here. I really liked what they did with the space and I thought the food was great. We went with my parents so there were four of us and that gave us the chance to try a good portion of the menu which isn't your typical German fare. You can expect lighter plates here but you can also fill up very easily. 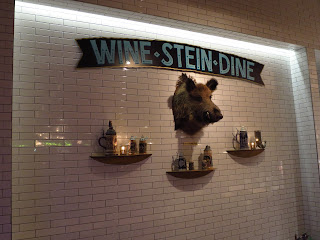 Originally it was a picture of the veal schnitzel that drove me in. Alas it was no longer veal but pork when we got there. No biggie but that said I didn't love it as much as I thought I would. It was rather thin and thus not as juicy as I was hoping. Funny bc like I said that was my most anticipated bite but it was the least appetizing. The rest of the meal was fantastic. A plate of porky "charcuterie" included an awesome chicken liver pate with bacon mixed in, some rib tips, and more. A dish made of sliced sweet potatoes with mustard green pistou, cider caramel, pickled mushrooms, and apple chips was pleasant. The Surfenturfen was a good example of the type of plates they're making here. It paired scallops with pork belly, kraut puree, spicy mustard, marinated apples, pears. I thought it was a well done dish. Particularly of note were the perfectly seared scallops. Another great "fusion" dish was a plate of ricotta dumplings with blood sausage. I wish that blood sausage was sold by the elbow. 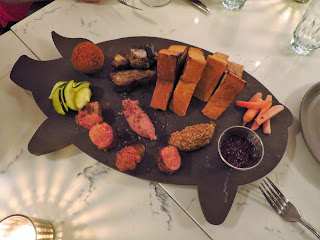 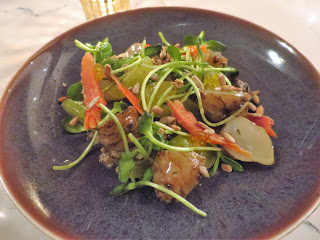 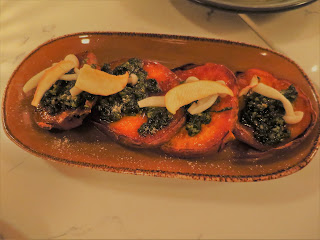 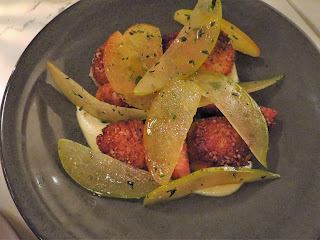 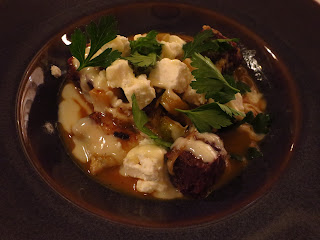 Plates of Food at Funkhausen

As I previously touched on, I didn't love the schnitzel. Good thing we also got the pork chop. One of my favorites of the year so far featured a perfectly medium rare bone in chop paired with kraut, potato, wurst, mustard, crispy bits of belly and diced rye crackers. It was a phenomenal plate of food. Dessert was some jelly stuffed donuts. Never bad when fried fresh which these were. I've heard good things about the brunch and the menu looks good so I plan on going back for that and would not hesitate to return for dinner if the opportunity presents itself. One of my favorite openings this year. 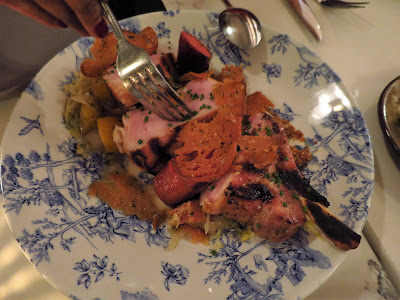 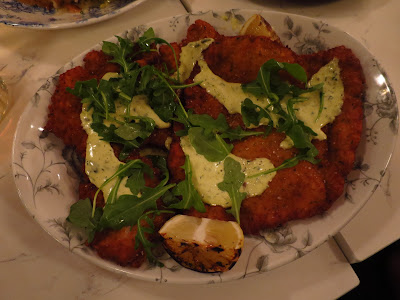 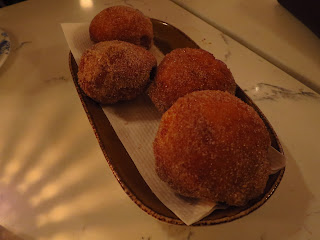