Eating like a local:
Regional food specialties
- More Old School stops from the D and it's surrounding suburbs

Thanksgiving week is here and the Chicago Bears are headed to Detroit to play the Lions on Thursday night. As you may or may not know we've eaten deep into the D. So now's the perfect time to check out part three in this series of one of the most fascinating cities in America. Detroit might be bankrupt but the good old timers aren't going anywhere. So next report up! You can check out Part One HERE and then Part Two HERE. Also rec'd is the old school hamburgers of Detroit special which can be seen HERE. While it's true that many of the suburbs have started to flourish as people move to them there's still some places sticking around the city, today we get a little mix of each. 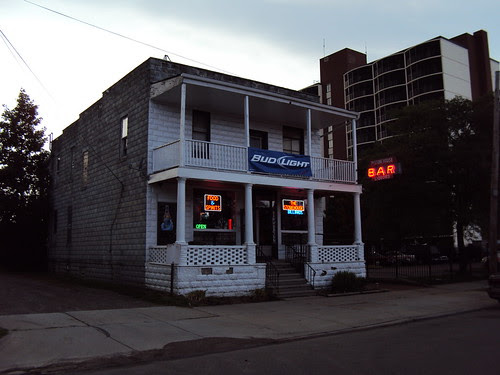 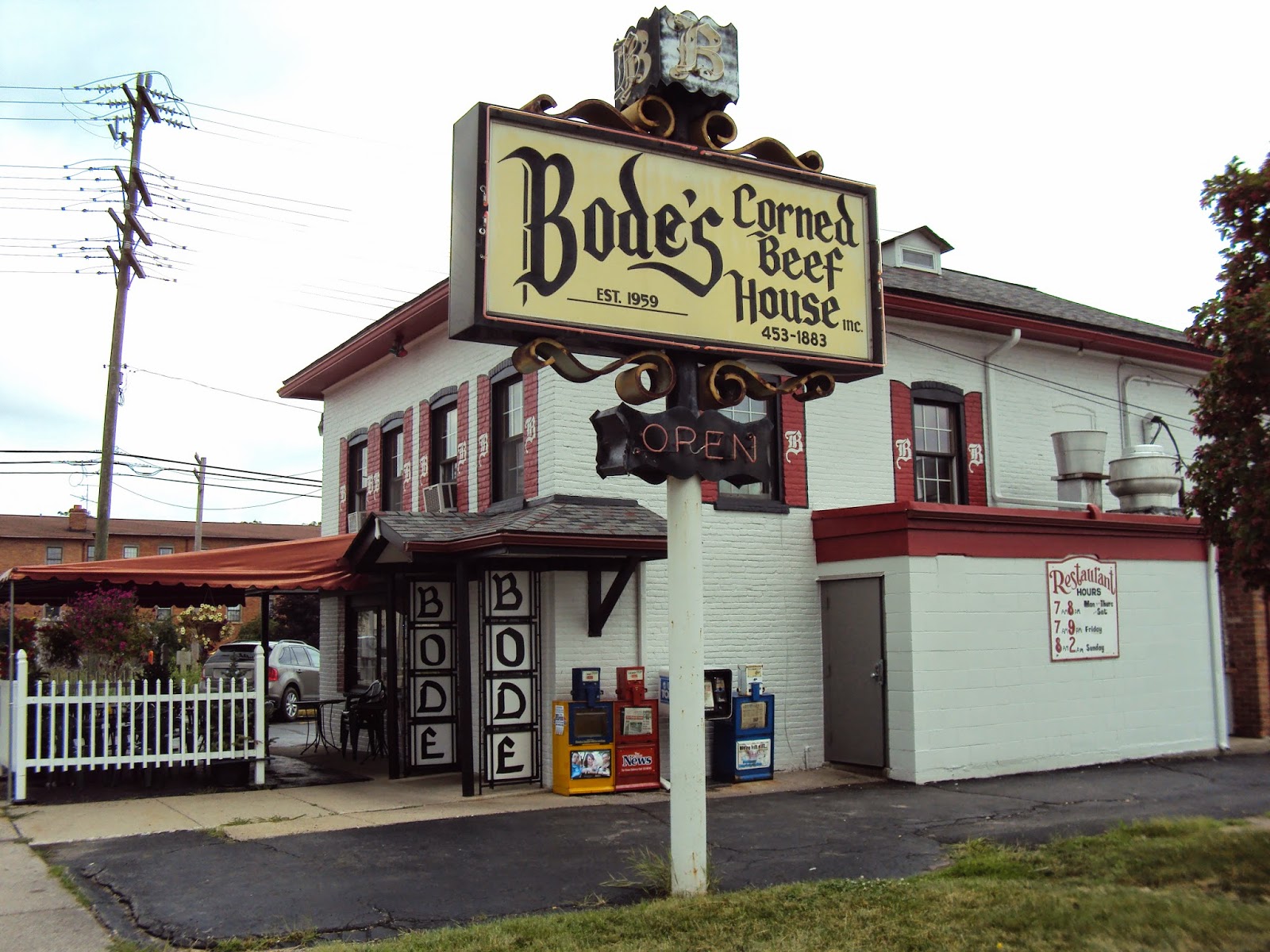 We start i n the suburbs with a couple popular style of sandwiches served in these parts. You don't need me to tell you what Bode's Corned Beef House is doing but I'll go ahead and tell you anyway in case you mistake it for an Irish pub, they're a diner with housemade corned beef. According to an article I found online they've been around since 1959 and have a few generations of loyal customers some of whom I remember being there on my visit. The corned beef hash was a little off as far as meat to potato ratio (more potato than meat) but still enjoyable while the thinly sliced sandwich on rye was quite satisfying. Cool neighborhood place. 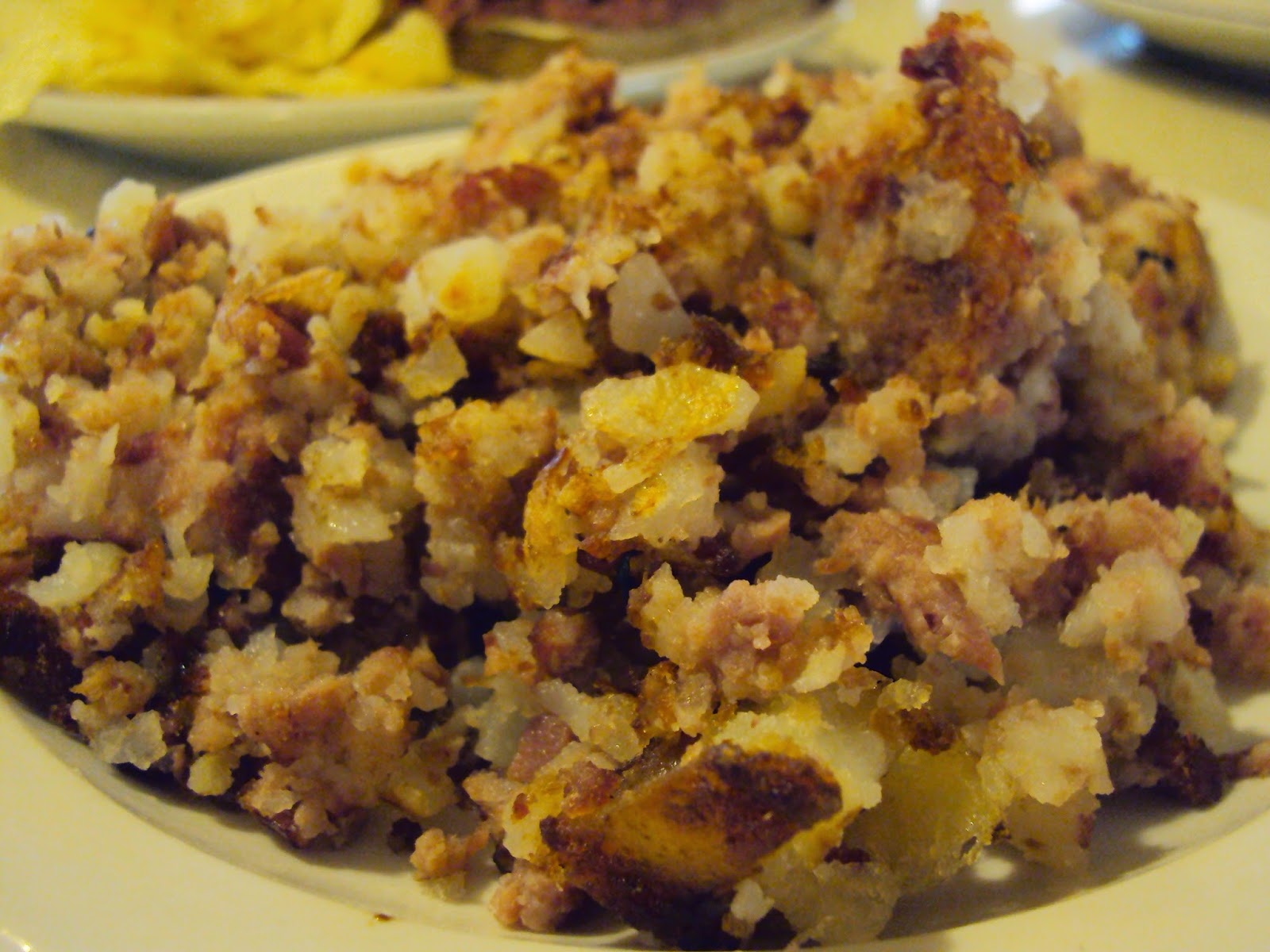 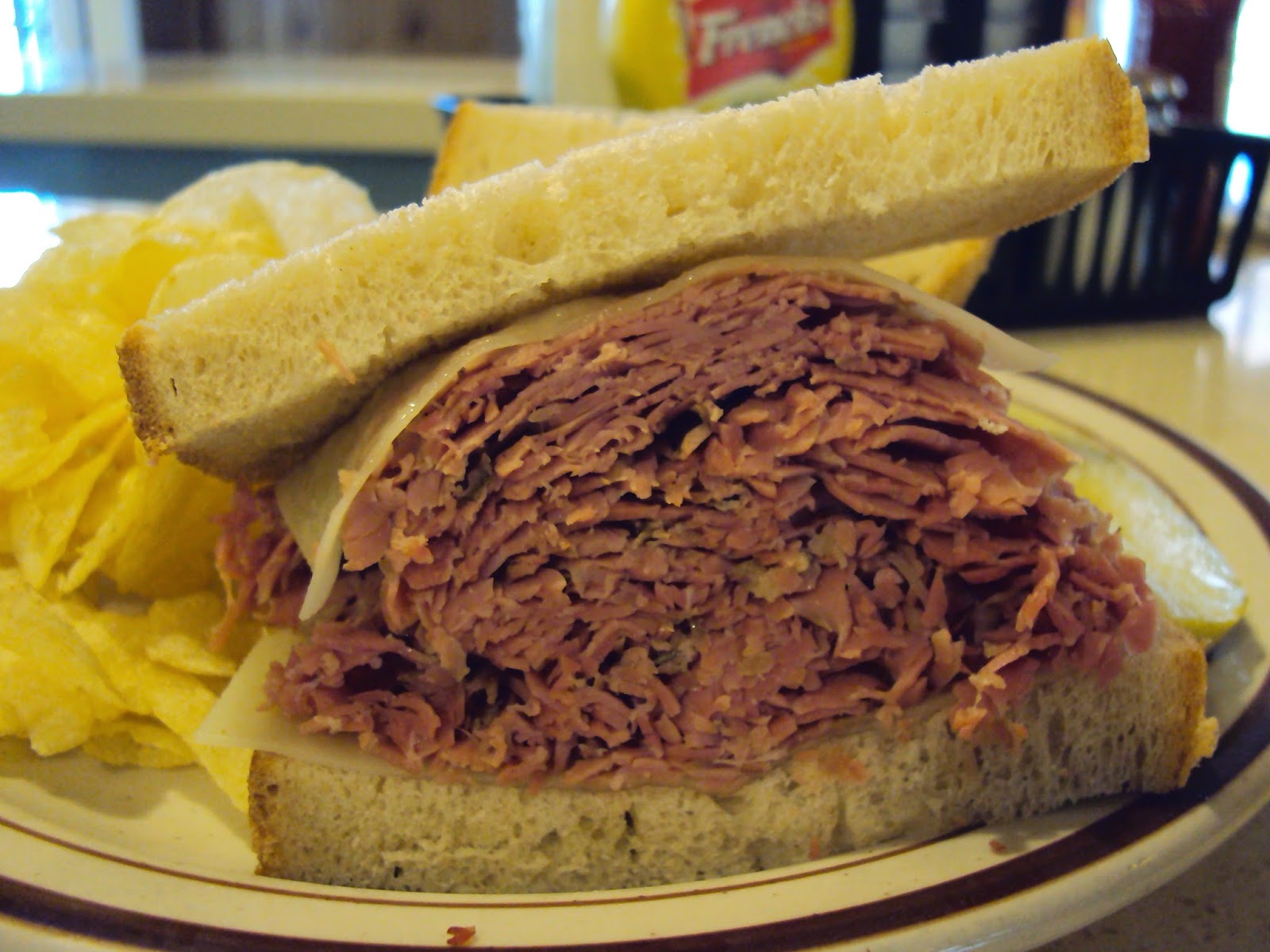 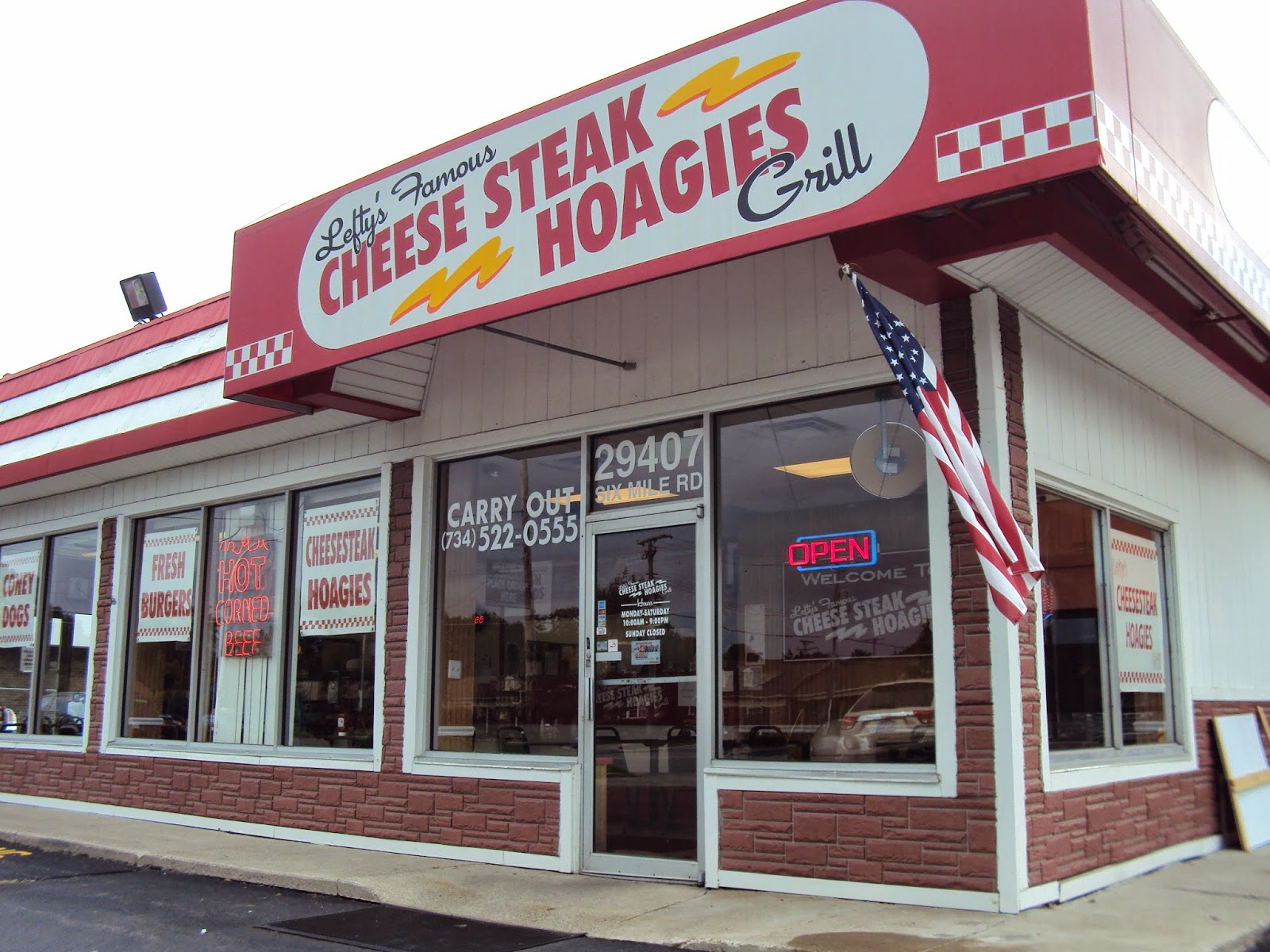 This area of Michigan has lots of cheesesteak stops but they're called hoagies and tend to come with a chopped cherry pepper spread as well as white cheddar cheese. This is the second one I stopped in at and just like the first place in Part Two I really enjoyed the sandwich from here. Finely diced meat, melted salty cheese and that zing from the pepper blend make sandwiches craveworthy. 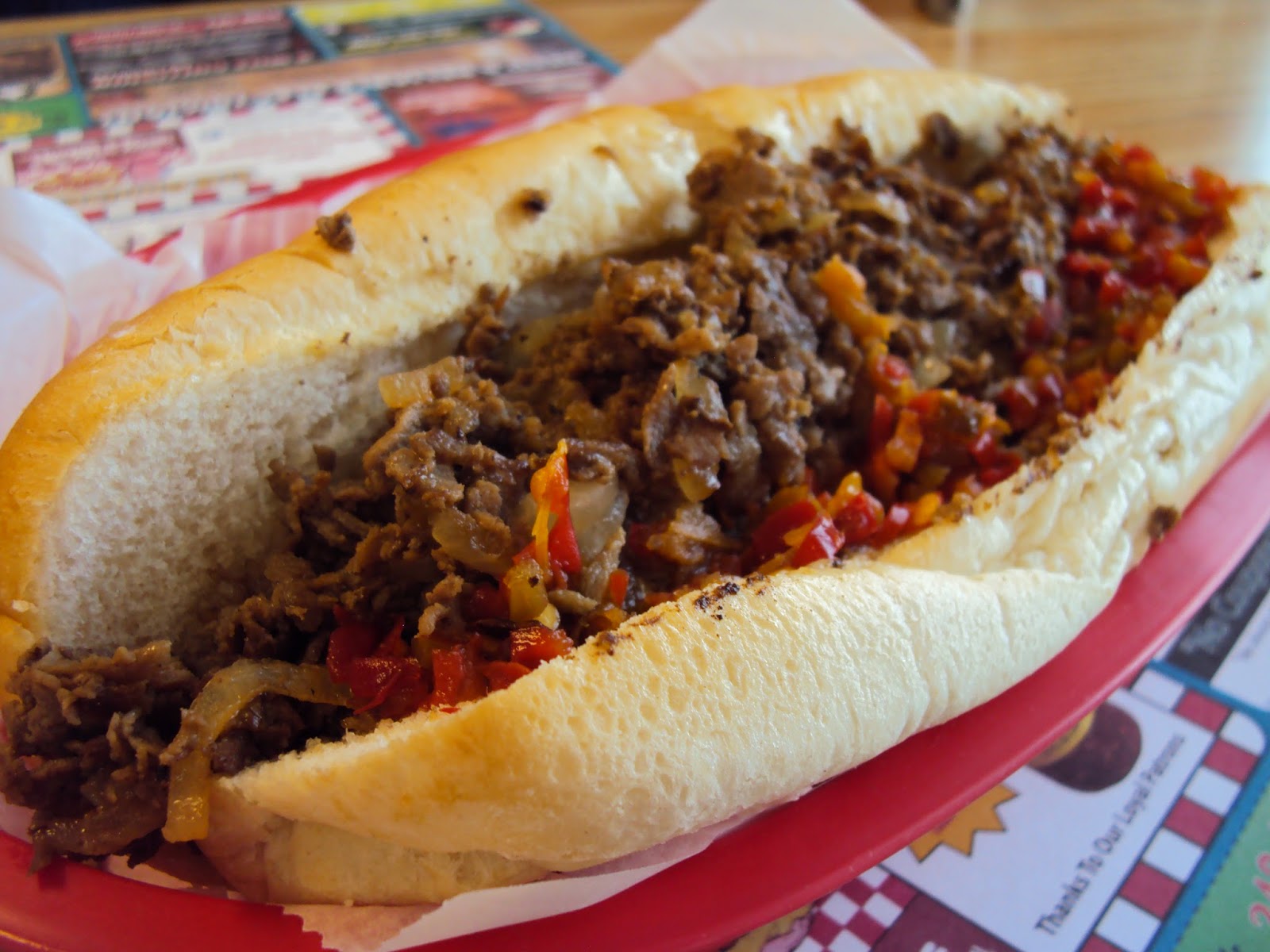 The once famous Chin Tiki was opened up in 1967 in downtown Detroit and had a nice little run until it's closing in 1980. If you were someone when visiting Detroit during it's prime you went there. A favorite of Muhammad Ali and Joe DiMaggio it was the 2nd operation of Marvin Chin who ran Chin's Chop Suey since it's opening in 1955 until it's closing in the middle 80's. 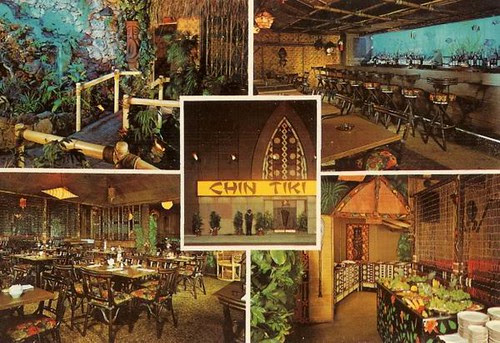 The tiki bar has been abandoned since it closed with the exception of a brief stint as a set in the movie '8 Mile' with Eminem. "♫I got an Oscar but I'm still a grouch, I use it as a door stop and a prop for the broken leg for the couch ♫". While pictures of the place taken by urban explorers reveal many of the stuff inside was left behind, alot of it also went to Chin's Chop Suey in Livonia which was opened by Marvin's son. I guess some also went to the production crew of the movie without the owners consent. 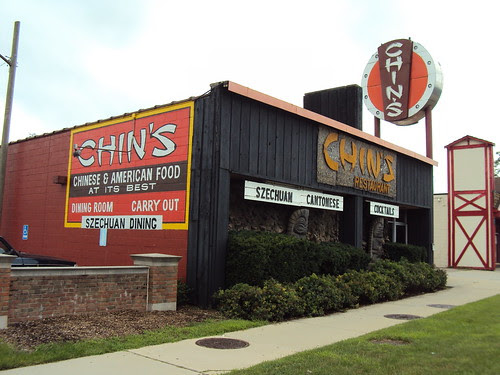 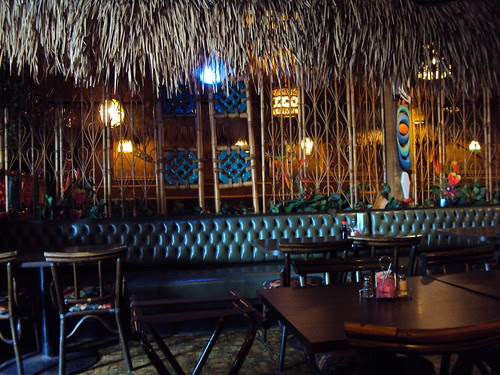 We've had some discussion over at LTHforum about the American Chinese regional favorite called many things including crispy almond chicken and war sue gai the latter of which the spellings can vary. The exact origin of War Sue Gai is kind of murky but it's birth almost certainly traces back to Detroit or maybe Columbus, Ohio. It's a hugely popular dish in both these places. At Chin's they list both almond chicken and also "War Shue Gai" on their menu. You can see the difference in the listed two in the picture I took below. 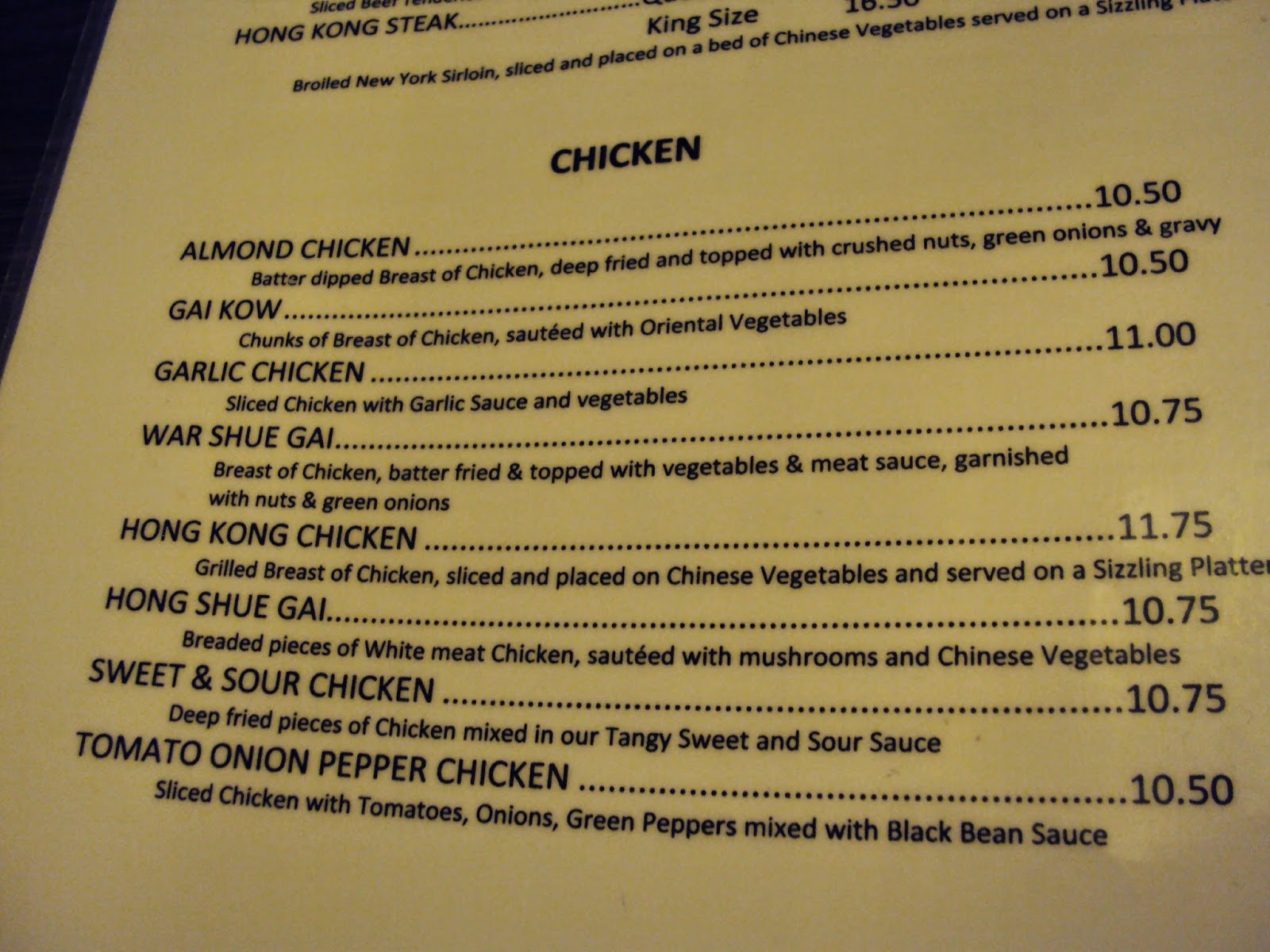 Egg rolls to start were awful. Literally fried wonton stuffed to the brim with bean sprouts they weren't worth eating after one bite was taken. I saw a girl in college from Columbus who's parents owned a Chinese restaurant and her families almond chicken recipe was always welcomed by me and my roommates. But Chin's takes the dish to another level with the addition of veggies and pork. I probably liked this alot more than I should have as I've had urges for it ever since. The chicken was batter fried to perfection and the sauce wasn't all that gloppy and actually had some pretty good flavor. The plate could easily feed three so I was left with leftovers which were later left at a bar somewhere. Too bad because I wanted some later that night. 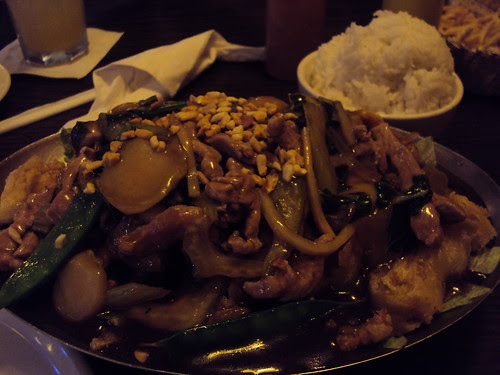 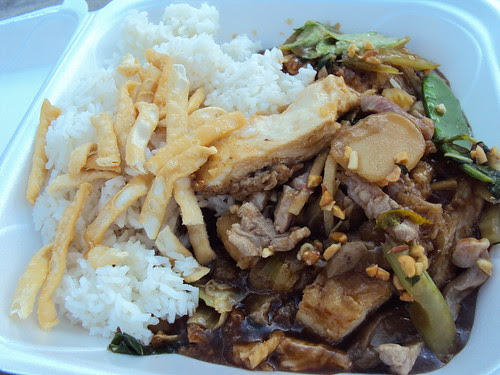 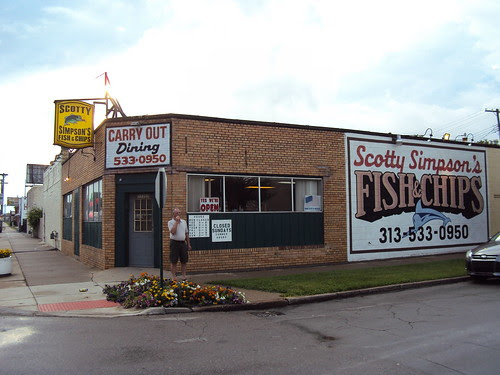 It's not surprising to find a chippy of this caliber in the Motor City considering it's right across the river from Ontario, Canada where every town has one. They know their Fish and Chips across the border 'eh! But you don't have to cross the Ambassador bridge to get the good stuff. Scotty Simpsons has been a neighborhood staple since 1950. The current owner started cooking there in 1960 and can still be found greeting his customers as they enter. 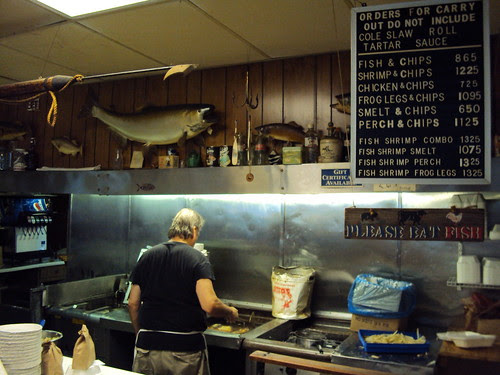 Like pretty much every other old time place in this city, Scotty's is bare bones. You can feel the grease on the walls which only adds to the charm as you wait in line watching the action happen. Chippy's should only have few things on their menu, its all centered around fried fish. Lots have just that and fries which if you want to be considered good must come freshly cut. Scotty's actually has a large menu for a shack with perch and smelt joining frog legs, chicken, shrimp, and their specialty fish and chips. Even so, perfection is found here my friends. This is a vintage Bristol parked inside the Ford Motor Company lot. 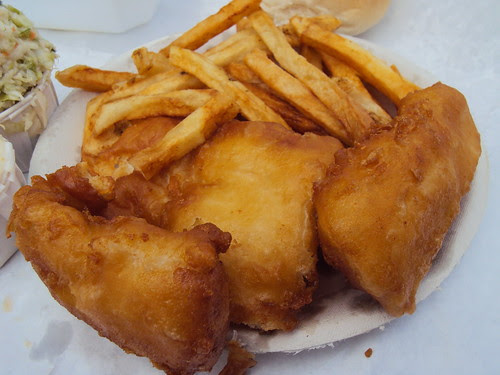 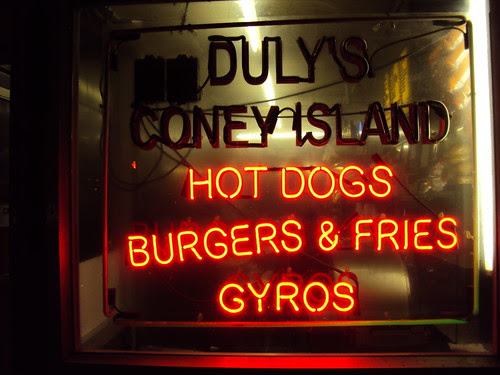 Duly's is virtually the same today as it was when they first opened. You cant go thru this city without seeing a Coney shop on each and every block. I think Duly's is the prime example of atmosphere at these places. A lunch counter where people come to at all hours of the day to eat. We saw weirdos and teenage girls alongside drunks and old timers all in there at once. 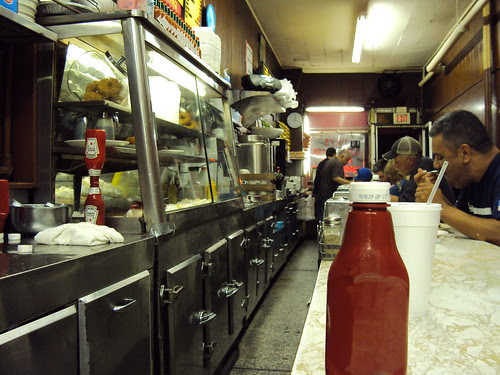 Some Coney Dog shop history buffs will tell you that it was the Greek Immigrants who started these stands and then Albanian ones followed, but Duly's proves them wrong. Duly Seit came from Albania and worked at his place until his death in 1963. Coney Shops dont just sell hot dogs. Most offer a nice sized selection of the usual suspects you'd find in a diner. Breakfast is big as are burgers, sandwiches etc... The chili cheese fries come with lots of fanfare here but being my first trip I had to go Coney. Great sauce, awful dog. Just like with the Vienna beef options here, if you don't use the natural casing Koegel wiener there, it's not a worthy option. 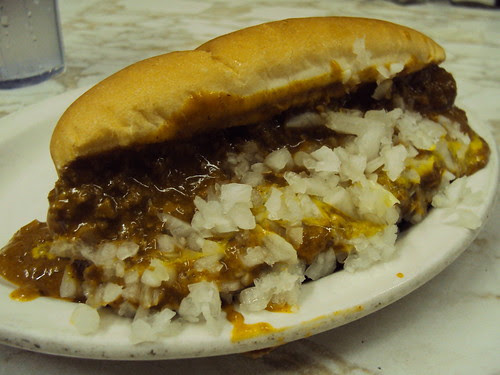 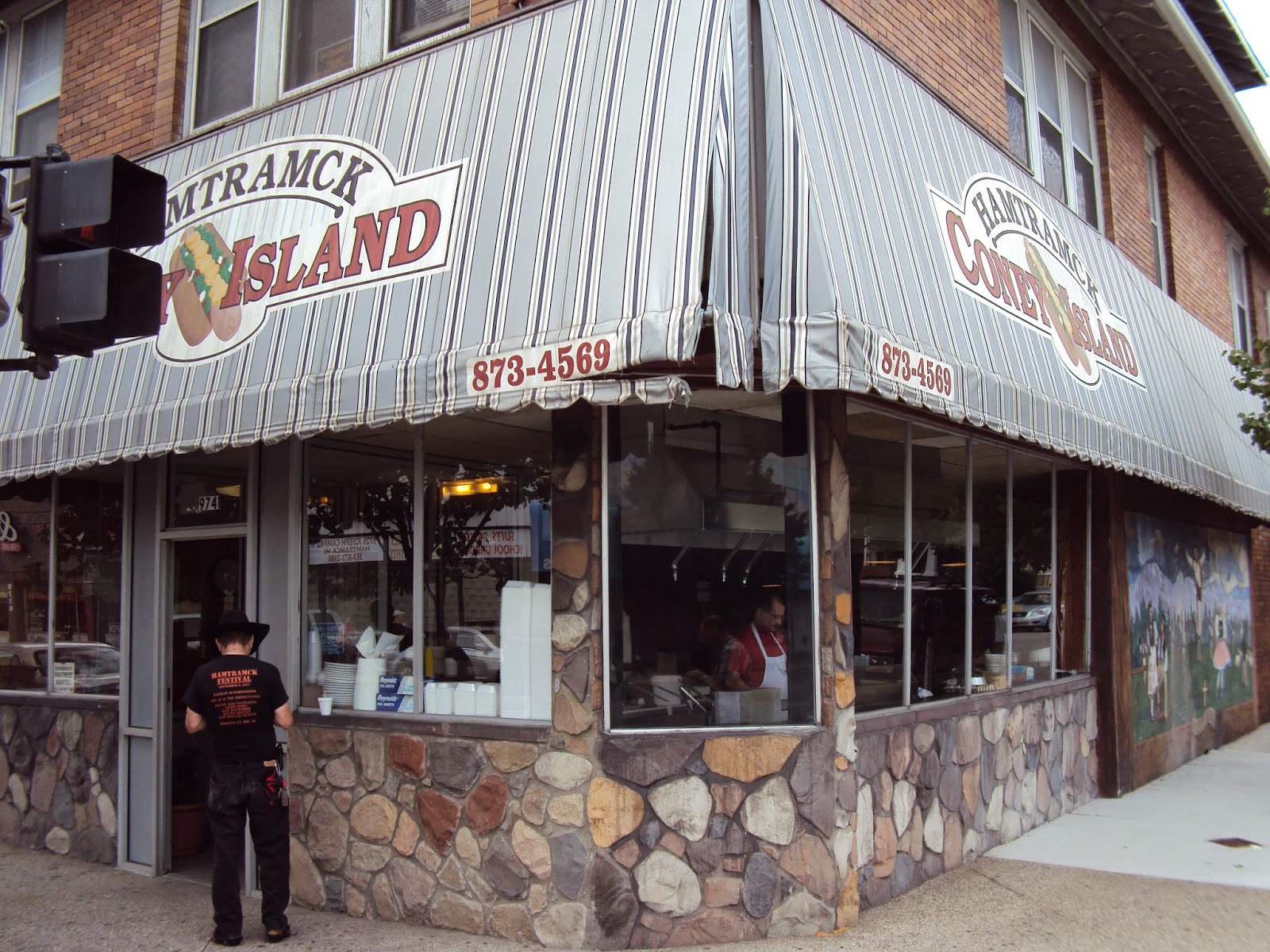 This is a worthy stop for a Coney. It too had the atmosphere down pat. I feel like most anyone working at any of the Coney Shops I've been too has been there since their youth and wont be gone until their time to leave earth comes. It's a lifetime job. A couple of old timers at the grill with a old regular sitting down and a younger guy taking orders. Friendly folks who know that the only way to go is the natural casing Koegel wiener made specifically for Coney style hot dogs. 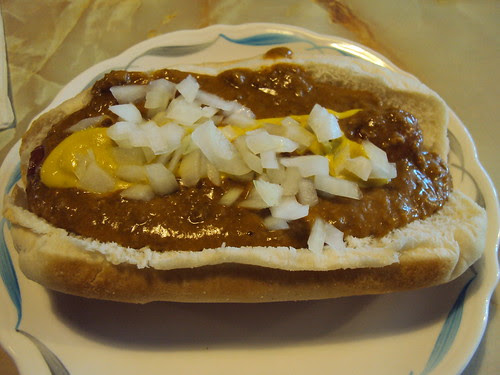 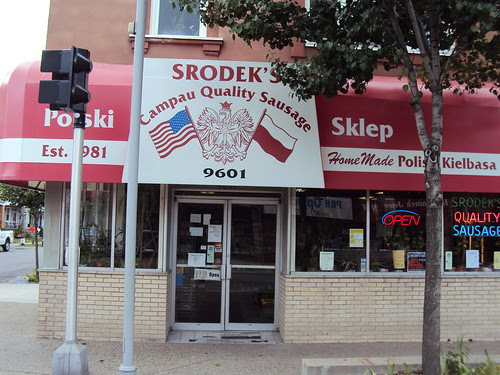 Not far down the block from here is Srodek's Polish and European Delicatessen. The neighborhood had a heavy amount of Polish Settlers come, some of which are still around including these guys and their old time customers who were inside speaking in native tongue with on our visit. If its an Eastern Europe favorite, they probably have it here. Everything looked good. The house made pierogi stuffed with farmers cheese and bacon and peach apricot kolaczki I took back home with me were great. 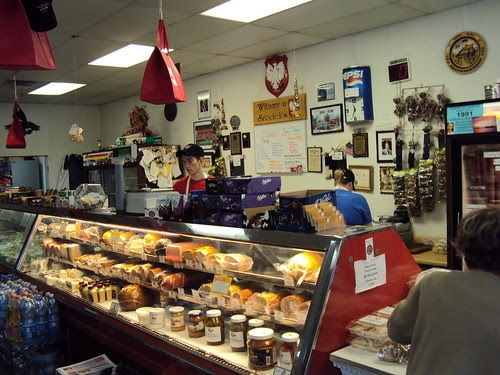 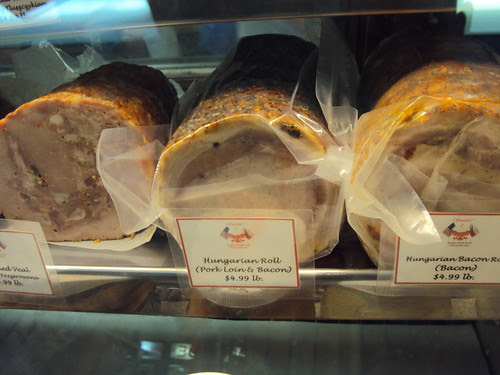 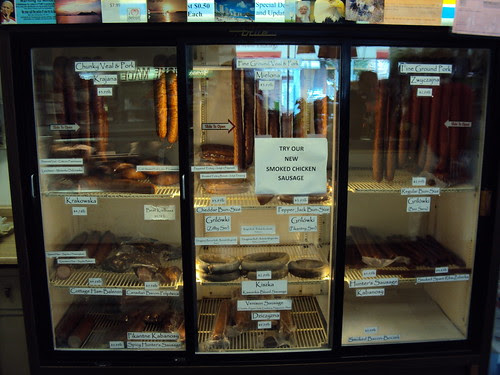 Neither Cederland nor Al Ameer or most other places were open on a late night trek down Warren avenue one evening. However each block did have a spot or two catering to the drinking and just off work crowds. Al Basha is a popular late night sub sandwich and pizza place for the college kids. They do a steady delivery business as witnessed by the countless phone calls coming in. I'm guessing their namesake Sandwich is favored with plenty of booze beforehand. 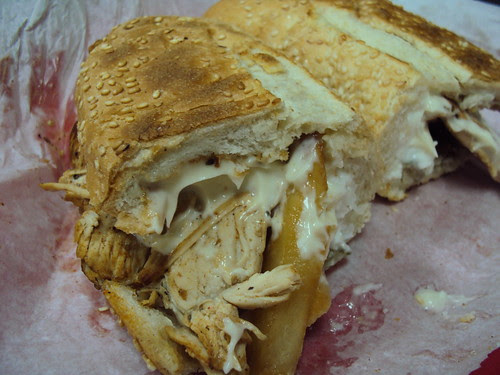 A smashed chicken breast is cooked until crispy on the outside and goes into a sesame seed roll with french fries, pickles and TONS of garlic mayo. The excess of the mayo made it almost inedible. The fresh baked bread was fantastic though. A few doors down is The Prince's? Bakery. 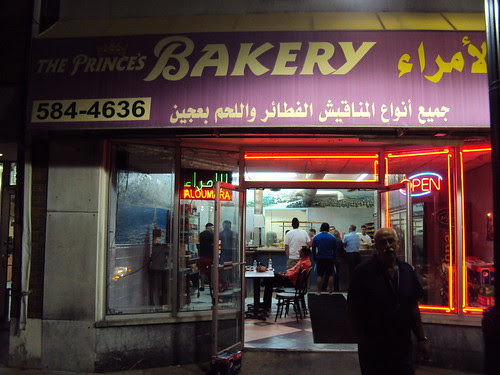 Here they had a steady flow of grab and go customers and those in there knew what was up. I got a meat pie, a cheese filled pastry pocket and a spinach one for $3 total and each was fantastic. Best three bucks I've spent in sometime. I wanted more immediately. 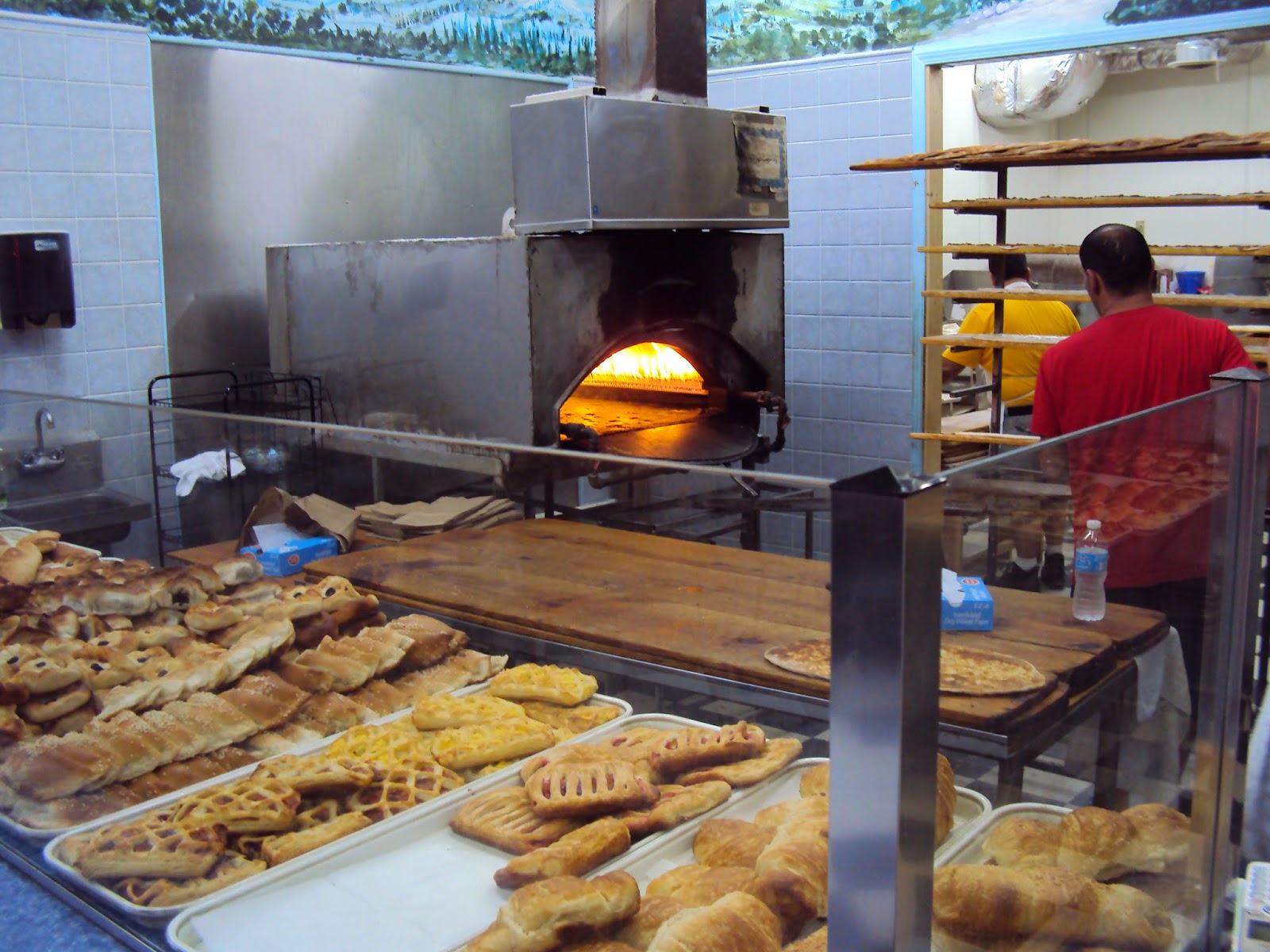 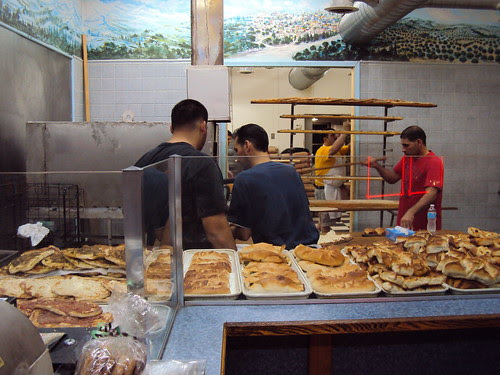 If you want your ex-girlfriend or ex-boyfriend to come crawling back to you on their knees (even if they're dating somebody else now) you must watch this video
right away...