Eating like a local:
Regional food specialties
-The Roads of America: Cruising while Chowing

Welcome to Travel Month at S'C'&C. Through the end of July we'll hit the road as hard as ever as we set out to seek and eat some of the great treats offered throughout the region and also Canada. Longtime readers know that when we're on the road one of the things we love to do is check out the popular locally loved spots serving up something specific to that town, city or domain. In fact we're way backed up so here's a post featuring seven specialty treats to eat found on the Great American Food Trail.
__________________________________________________

I took a ride down to Nashville to celebrate at my cousins bachelor party last year and as the driver of one car I made sure I had some food stops we couldnt find elsewhere planned rather than the usual chains and even worse gas sation snacks some people eat while riding. Lynn's Paradise Cafe in Louisville, KY was where we stopped for lunch on the way down.It just so happens that place is up for sale bc Lynn is moving on to her next adventure. If you ever wanted to own a piece of roadfood now's your chance. Here's my pitch.

If you haven't been or read about Lynn's it's a quirky little spot in a old school turned hippie neighborhood. It's big and there's a bar area (liquor is served) along with a good amount of tables inside and an outdoor patio as well. Inside as you first enter there's a large area with all sorts of those things you buy someone for a quick laugh, haha, then its never seen nor thought of again. I chose a Bloody to start my meal and was expecting something big time with the double digit pricetag and the mention of 36 ingredients it takes to make it. Not that I was really buying the whole ingredient thing I found the Bloody to be average at best. Nothing like you find in Wisconsin.

Inside and outside dining

A bloody way to start the meal

I wasn't sure if the entire gimmick was why people love this place but it was all good from here. My second option would of been the fried green tomato BLT and that's was got by the three others with me. I enjoyed my half of a half sandwich that I tried and thought the sides of which they give you a choice of with your sandwich order were pretty good too. The cheesy grits and onions rings that is.

But I couldn't go thru Louisville and not try one of their famous signature 'Hot Brown' sandwiches. Created in the 1920's at the Brown Hotel the original was concocted as an alternative option to the typical late night ham and cheese offering of that era. Its a take on Welsh Rarebit that consists of bread topped with fresh sliced turkey, layered with mornay sauce and cheese and served with bacon and in some cases tomatoes and other things on top. They offer their own version at Lynn's with sourdough bread on the bottom and fresh roasted turkey in between locally made cheese.

According to the menu this was named the "best sandwich in America" by Alton Brown and while I'm not sure if that's due to the name connection I am sure it takes a knife and fork to eat it so its not really a sandwich anyway. But eat it I did. I thought it was pretty damn good and loved the bites where I could get some bread, turkey, tomato and bacon up in there. I'd get it again if I ever stop in and I just may when I find myself back out this way. 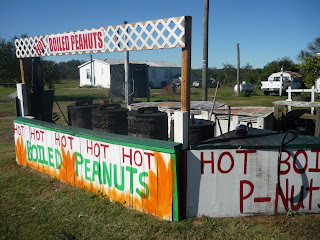 Spied and tried alongside the road in the middle of Florida


I'd never tried the southern treat boiled peanuts until this past winter. A trip down to the sunshine state brought us to Tampa for a Cuban Sandwich Shuffle and then into South Florida for some local eats followed up with all sorts of seafood and fish down in the Keys. During this trip I spied a place selling boiled peanuts on the side of the road in the middle of the state and decided to give them a try. Awesome! But not something you should try and eat while driving :) 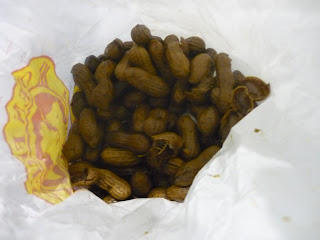 On the way back from Nashville along I-65 we stopped in at another popular roadfood rec called Zaharakos in Columbus, Indiana. The town that gave us Tony Stewart y'alls! Ha I keed and am not a NASCAR fan but you know they take that serious in these parts.

Longtime favorite in Columbus, IN

Zaharakos takes Ice Cream parlors serious so I'd always wanted to stop into the historic landmark in downtown Columbus which is about a five minute ride off the highway. Founded in 1900 the place is as well upkept as any old time ice cream parlor I've been too.

Zaharakos also doubles as a museum and has some very nice old school fountains and other soda shop memorabilia on display throughout the place and a candy/gift store too. You can take a seat at the fountain or sit a table with waiter service. The pic up above is of only one room with there being another with an old school no longer in use fully loaded soda fountain on display and tables for larger parties to sit in between the old soda fountains.

Taken into another time

The place was very nice inside and brought us back into another era sitting at the fountain. I'm not a big ice cream guy and since we still had a little bit of a ride back I only went with a real soda fountain style made Green River. Service was a little spotty but it wasn't awful either, just a few miscues and some stuff that needed to be cleaned up. The signature food item of the house is the 'Gom Sandwich' which is Zaharakos version of a Sloppy Joe served on thick toasted white bread. There's debate about whether the breaded pork tenderloin sandwich is a product of Indiana or Iowa. Both take claim to the throne of which state makes the best so you tend to find them on menus throughout each.

I liked the idea of making a grilled cheese with Sloppy Joe meat but didn't think the $7 (w/ cheese) pricetag on a sloppy Joe with chips in Central Indiana was accurate but whatever, it was tasty. The pork tenderloin even though it was homemade was just ok. From my experiences thus far, Iowa handles Indiana pretty easily in that game. If you like old school Midwest towns with the long gone independent movie theaters (there's a cool one here) and ice cream parlors like Zaharakos stop in Columbus Indiana if you get the chance.

If you go to a place that serves food in Iowa odds are they have a tenderloin on the menu. It doesnt matter if its a bar or or some public schools lunch menu, they eat these everywhere there. I got to try a couple loved ones in Des Moines a while back and have looked forward to more since. There's even a bible for Iowa 'loins if you're ever on the road there and want to try one. I ate another renowned place when I stopped in at TC's Point After in Dewitt.

Dewitt is a small little town (Duh) with a typical little Main street. Subway, barber shop etc and  TC's just a few doors down. Hey, I guess you cant eat a tenderloin at TC's constantly but I sure as hell would if the option was their 2009 2nd place at the Iowa State Fair Tenderloin sandwich or some shit served inside some foam from Subway. "They take a whole pork loin and cut of about a six ounce center portion of pork, run it through a tenderizer front and back, and then coat it with a secret homemade batter." I've actually been to the spot that beat TC's out (Goldie's Ice Cream shop) and remember both for their juicy factor which is something you don't always get with tenderloins.

TC's is a nice place to have as your local tavern, typical Midwest vibe inside, this one with lots of old wood and on the darker side as far as lighting with a sports theme to it. Plenty of bar league trophies and Hawkeye stuff on display as well as memorabilia from the not so lovable losers over on Addison. They love their Cubbie baseball in Iowa, as anyone who lives near Wrigley knows. They come by the busload and over the years all their walking around, taking pictures and eating and drinking, while watching bad baseball at Wrigley has caused cracks in the stadium structure and sidewalks around it. So next time around someone bring me over a tenderloin from TC's and I'll be a little more welcoming to all the big bone-ded individuals with their "(Insert some random tavern here) in Iowa Cubs Trip 2013" shirts on. I keed. TC's = Top Notch.

Not a bad fallback found on the side of the road in Sterling, IL after catching a couple famous fried chicken places at hours they werent open. Aunt TT's Concessions is a popular place for a quick lunch. She fries some damn fine corn dogs (Born in Springfield, IL) made with Vienna Beef franks.You can find her on Facebook. 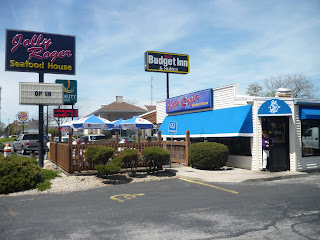 I took a road trip to Toronto recently (stay tuned) which took us thru Ohio and into Buffalo on day one. The first of many food stops was the longtime Roadfood favorite Jolly Roger Seafood House in Port Clinton Ohio. Having never been to neither I chose it over New Sandusky Fish Company which was also en route. If I had my choice we would of done both but I'm sure there will be another time.

Waiting for my order...they do an excellent breading/frying job here

It was just me and she so we decided to split both a lake perch and walleye sandwich. I made one a meal and upgraded to their onion rings and got a side of fresh fried 'shrooms too. The menu isn't big and thus what they do, they do right. The onion rings and mushrooms were both excellent examples and the sandwiches were too. I preferred the lake perch which was so simple it would seem anyone can make them like this but I never had a (Great Lakes) fish sandwich so good. Perfectly fried fresh filets between a soft locally sourced bun with their homemade tarter sauce was all that was needed. Roadfood at it's finest. 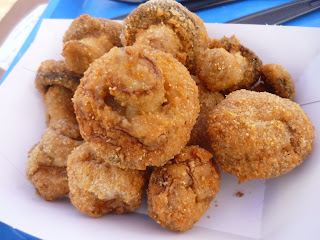 
Spots like this serving fresh caught fish from the backyard are found throughout the Great Lakes states. Check my report on lake perch in Northwest Indiana HERE.

Wisconsin is a great place to shop local when stuff is in season. They have one of the countries best farmers markets in Madison and smaller well stocked ones throughout the state. I stopped into the Hudson Farmers Market last summer and got some really nice squash and just had to try some fried dough from the Wisconsin Wontons stand. Both the fresh fruit filled ones and the chopped jalapenos with cheese curd wontons were a real treat to eat and so 'sconnie like. 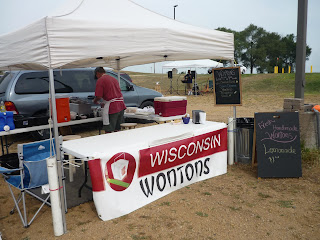 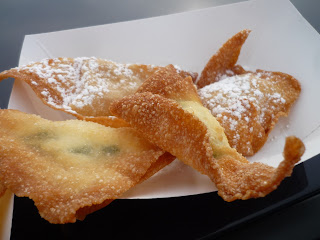 eToro is the ultimate forex trading platform for beginning and established traders.