The recent opening of Takashi's 'Slurping Turtle' has people from around Chicago excited to try what many are describing as "the real ramen" of course others who've been everywhere are saying it's average. For whatever reason the ramen craze hasn't taken off here like it has elsewhere. In fact some people will tell you there is no spots to grab the good stuff. However that's untrue, if were talking Downtown than yeah that's a valid statement. But if you go out to Arlington Heights and visit Mitsuwa Market (report on that coming) you can try some of the most well known and much liked Tonkatsu (Pork broth based) Ramen. 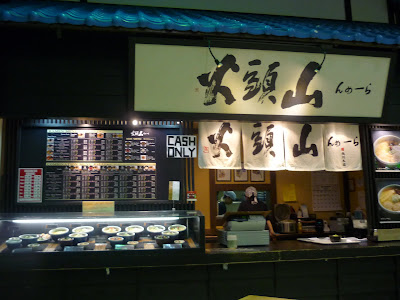 Santouka is a Japanese franchise that is the brainchild of it founder who one day had average ramen and from there on in started making his own. The popularity of the mans shop became so big and the legend rose with each mention in publications from all over the world that today they make his original recipe at locations all over Japan as well as Singapore, Malaysia, Hong Kong, Vancouver with several US in California and one in New Jersey and also Arlington Heights. Yeah that's alot of spots, all over the globe, but people swear by it for tonkatsu ramen. They also have a great track record for consistency from one spot to another. Ramen is what they got and its offered in S, M and LG sizes with a few different pork based broths with pork meat on top. I've had the miso and soy so far and enjoy them both very much. 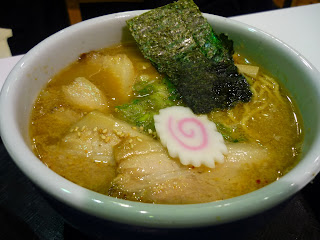 Bowl of Tonkatsu Ramen from Santouka

I was put onto Santouka by a Hall of Fame poster over at LTH who also introduced me to the wide world of ramen. Before his review I had only been aware with the stuff I loved in high school and was already sick of in college. Sure I knew there's better in Japan but I never knew this good. This style comes from Northern Japan where it gets very chilly and it's made to warm you up PIGMON explained, that's why it's so damn good on a cold winter day. The broth is rich and super deep in flavor. Each broth has different tastes from rich to really rich but I liked them both and don't remember the differences that much. The noodles are imported from Japan with the perfect amount of chew and the pork is Berkshire and fall apart tender. Next time I'll be trying the founders favorite and their signature bowl the toroniku. 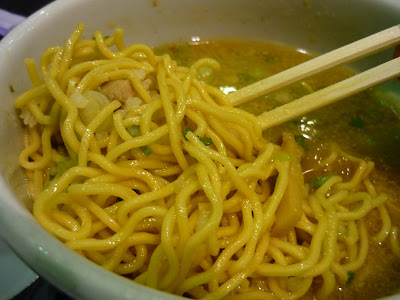 The noodles up close