Continuing on with the holiday season and places that come of use during it. Anyone taking a ride up to Kenosha's Outlet mall should consider a stop at Ron's Place. It had long been on my radar, probably since my first trip to Tenuta's Italian Superstore (more on that later on chibbqking) which is right next door. Ever since I saw that stained glass with the cartoon character eating the burger, by the looks of it from the outside I knew it was a real deal Wisconsin tavern. It was just hard to find a time when there are so many other good burgers in the Kenosha-Racine area. I promised myself next time I was in Kenosha I would get me a burger from Ron's. So I took a ride up to the outlets last week and made my usual stop at the Brat Stop followed by a trip to Tenuta's and then over to Ron's Place. 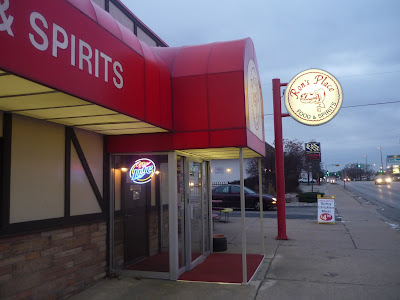 a locals favorite for booze and burgers in Kenosha

The Kenosha native who rec'd the burger to me told me the best seat in the house is at the end of the bar where the burgers are being made. These spots were taken on my visit, so we sat at the middle of it between two groups of regulars. Classic Kenosha with a couple of them in Bears gear and a few others in green and gold. This is a real regulars type bar that makes everyone in there feel at home. Founded in 1972 by Ron and his wife Pat it's still run by his daughter today. The food item of choice to order is the 5x5 which is a burger made from half pound of fresh ground beef and a 5 inch sesame seed bun. Other popular orders are the walleye sandwich or dinner available Wednesday and Friday and the Cajun chicken breast sandwich. 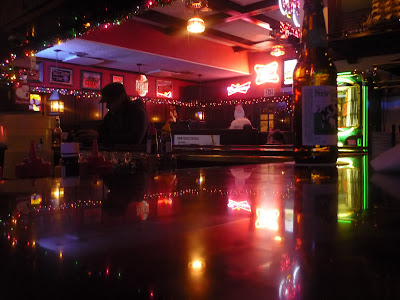 View from my seat at the bar

People have been eating and drinking at Ron's since they turned 21 and long after that. Along with their burgers, Ron's Place is also famous for their quality tea's aka Long Islands. They have about 40 different flavor combination's ranging from original to Hawaiian to Jamaican and so on. They come served in a southern glass tea mug and the menu is so large when you look at it becomes hard to decide. I didn't want one on this trip but will be back to have one next time. Of course like any respectable WI tavern they have spotted cow in the bottle, though not on tap. With this being my first visit I knew I was going to have the 5x5 but other burgers are available. They bring a platter of ketchup, mustard, onions, pickles and giardinera for you to distribute onto your burger as you so please. 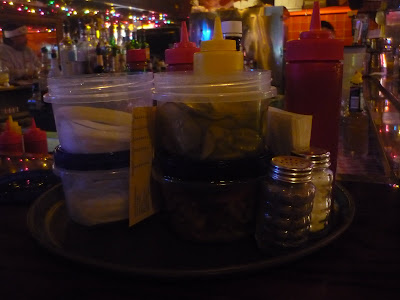 Toppings platter delivered to you after placing a burger order

The 5x5 comes with your choice of cheese if you want it and the option of lettuce, tomato and mayo. It's nice being able to load the pickles on from the toppings tray that they give you when ordering burgers and I liked that hot peppers were included. I told the friendly bartender "gimme it the way it's most ordered" and got mine with American cheese, lettuce, tomato and mayo. I put everything else on it but the ketchup and it was a messy thing to say the least. It helped cutting it in half after I dressed it. 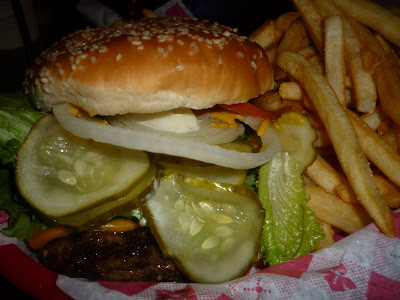 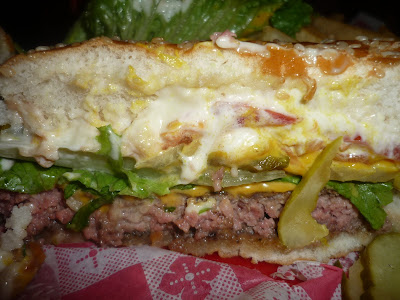 I thought this burger was everything you would want your local drinking establishments burger to be. It was $5.95 with fries (less without) and quite a large portion when everything was piled on. The only semi bad part was that the bottom bun was virtually soaked up in meat juice from the patty, which was what made it only somewhat bad, the juice was great, skip the fries. All in all it was a very juicy burger that went great with a cold one while sitting at da bar. I'll get back here one time this spring or summer. You should do the same. 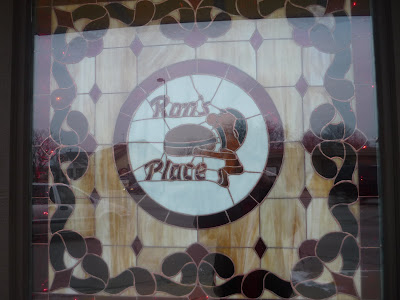 Another good burger in Kenosha, WI