If you go down the sauce condiment aisle at an actual supermarket these days (Dominicks and Jewel don't count) you will be greeted by 100's of different bottled sauces. Most of these sauces come from old family recipes to the aisles of Americas markets with an American dream of becoming the next big thing. The selection can be overwhelming and while its obvious to select an independent manufacturer like someone other than Kraft the decision of which one to select is hard. There are so many to try but I got one for you that is worth filling your pantry with. Country Bob's all purpose sauce has become my go to choice for marinating a burger before it hits the grill-giving it that little extra bit of flavor that takes a burger from good to great. 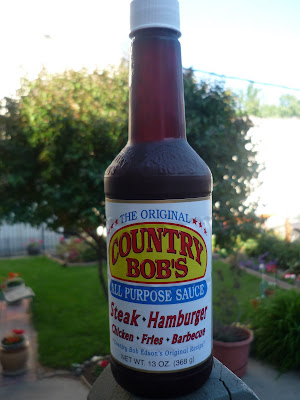 You have to take advantage of fresh summertime produce when its available and its no different when making burgers. I love a fresh grilled burger done up deluxe style served with all the fresh fixings available at your local farmers market.
Ingredients
patty of fresh beef (80/20) marinated in Country Bob's Sauce
fresh sliced beefsteak tomatoes
thinly sliced red onions
fresh lettuce leaves
local cheese 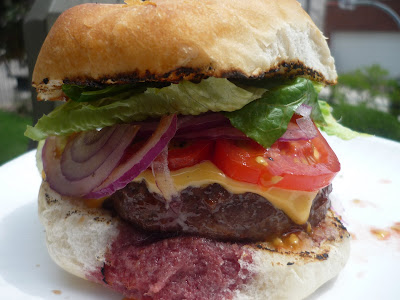 What can we say? the char cheddar burger is a hybrid of a Chicago/Wisconsin super treat. These burgers can be found at the many different hot dog/burger stands around Chicagoland and now in the comfort of your own backyard. The combination of flavors from the Merkt's cheddar spread, bacon, grilled onions and charred edges makes for one of the tastiest burgers on the planet. So easy to recreate at home as long as you have fire. 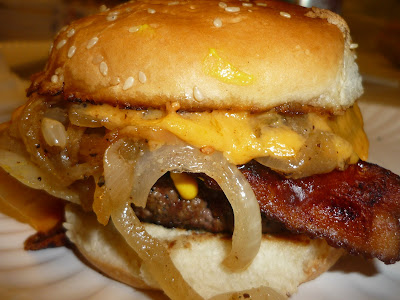 This is a burger I like to make over summer when the mushroom are in full bloom from River Valley Ranch in Burlington, WI. I will usually never order a mushroom Swiss melt when I'm at a bar or restaurant and that's because I have yet to fond a variation that comes close to this. The first thing your going to need is some bacon from Neuske's-dont even think about substituting-it must be Nueske's. The next thing is some fresh button mushrooms from RVR mushroom farm (about 90 mins from Chicago) and some Wisconsin Swiss cheese.

Take the bacon and crisp it up on a pan and set aside when done and add the thinly sliced mushrooms to the bacon grease and cook until done. Grill up a patty with diced onions, peppers pushed into the top and bottom and build your burger accordingly. 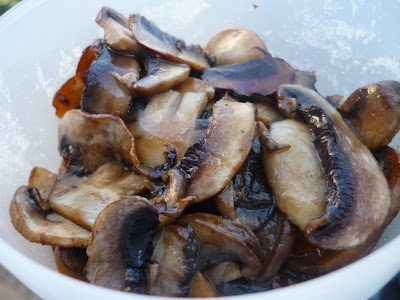 This burger is best due to its quality toppings 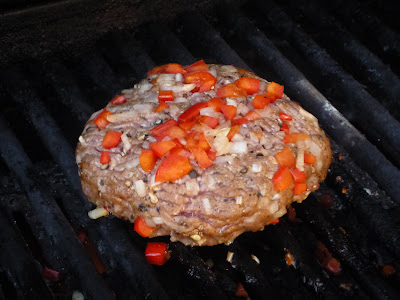 Patty on the grill 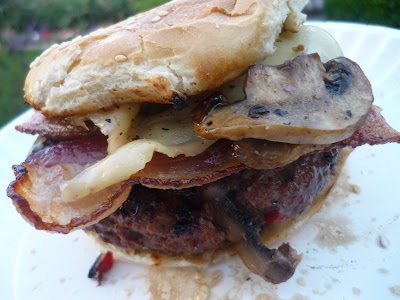 The Juicy Lucy is a popular regional variation of a cheeseburger that comes to us from Minneapolis, MN. Its signature is the fact that the cheese is oozing in between two patties rather than on top of one. I found this recipe over at AHT and tried it at home. Its just another fine example of a burger coming out of the Midwest. 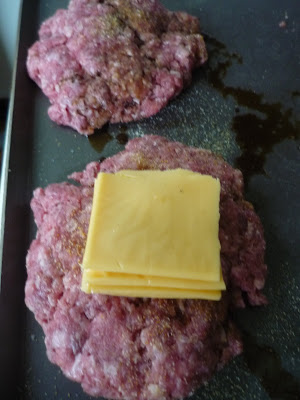 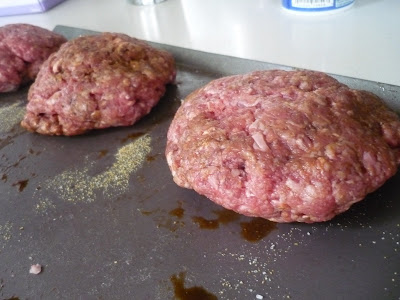 ^Fold cheese slices in half twice so you have a little stack of quartered cheese slices. Place a folded cheese stack on 4 the patties, covering cheese with remaining 4 patties. 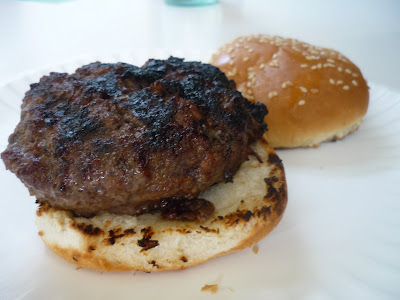 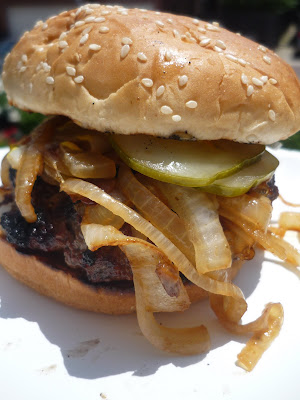 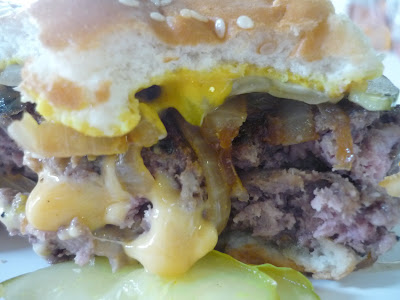 Muff Burger (a chibbqking special)
The Muff Burger was born on the 4th of July in 1776 in the carriage lot behind Independence Hall when America's forefathers decided to create an All-American burger that would stick it to the British. They took a ball of fresh beef from the heartlands of America and smashed it on a griddle as if it were a Redcoat. The beef begged for mercy as it seared it screamed and bled the blood of King George the 3rd into the charcoal fires of liberty. As George Washingtons troops scarfed down their burgers topped with American cheese, Canadian bacon and a fried egg served atop an English muffin they chanted "eat my muff" "eat my muff" to the captured British soldiers across the river. 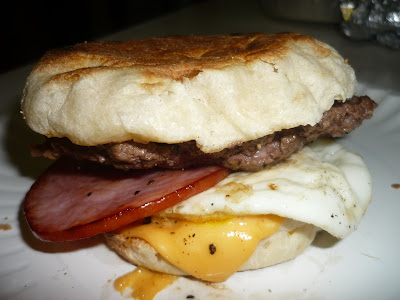 Have a super 4th of July...there isn't a better holiday out there so make sure to enjoy it responsibly so you can see another. See you next week with a whole new set of amazing food stops and recipes. Be sure to check out chibbqking next week in the Redeye Virtual Kitchen Stadium cookoff.
Posted by KingT at 9:51 AM

yah sorry, i didnt see the triple bbq bacon ranch Sconnie-cheddar burger on there. i doubt that anything could be much more american than that. the rest do look good though