When it was announced that the team behind Edgewater’s Little Bad Wolf was opening a spot in Logan Square it wasn’t anything to take note of. It’s a popular place but I wasn’t sure we needed another location. But in the end we didn’t get a second Little Bad Wolf and instead got a spot called Gretel which is it’s own thing. A whiskey bar on Armitage in the former space of a pizza place. 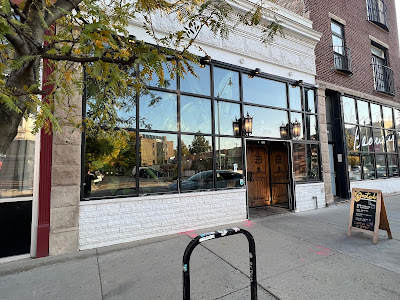 The bar itself boasts 100’s of bottles of booze lined up against the wall with a rolling ladder used to reach the ones that are far up. It’s not a unique setup in this time of the cocktail boom but it is cool and I like how the space feels. The ceilings are high and it’s dimly lit but not too dark when the sun is still out. The menu at Gretel is different than that at Little Bad Wolf but there’s a few crossovers. For the most part they offer an upscale take on American bar food. A dish like gyoza isn’t as common as oysters Rockefeller but you get the idea. Both make a nice snack at the bar when having a drink. 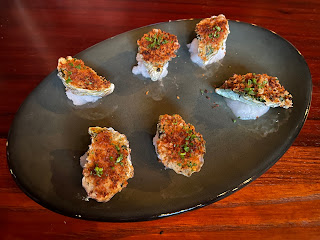 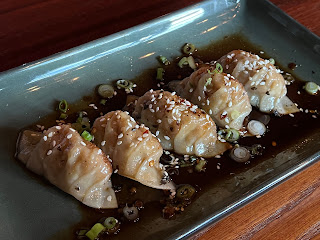 They do big old entrees like prime rib and bone-in ribeye for two so it’s also a good spot for a nice night out on the town. One of the menu items that caught my eye was their French Dip. You don’t see this too often here in the land of the Italian beef. Of course I prefer an Italian beef to a French Dip but I can still enjoy the latter when a place makes a good one and Gretel definitely does. You can tell that the beef was freshly cut from a larger roast and both the bread and gravy were what you want with a French Dip. It’s the best in Chicago that I’ve tried but it’s not like there’s a ton of spots that make this LA original. The sandwich comes with a side and there’s a ton of online love for the mac and cheese so we got that and it’s good but I prefer the old school styles and not the chef driven ones when it comes to this dish. The latter tend to be baked and thus dryer and clumpier but this one was good. 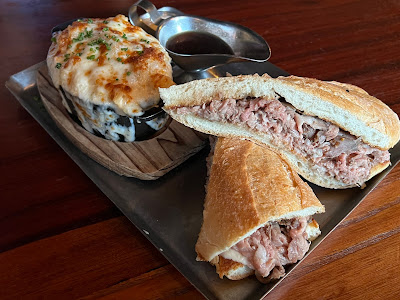 What about the burger? I’m glad you asked bc I also had to try that based on the fact it’s so popular at Little Bad Wolf. But this one is a bit different, it’s called the Gretel Burger and it comes with two patties, white and yellow American cheese, red onion, garlic aioli, and pickles on a soft but stable sesame and poppy seeded bun. The fries which it comes with are equally good, thin and freshly cut with a tasty aioli for dipping. It’s a contender for the best burger in the neighborhood and maybe the best burger in town by extension since Logan Square is a hotbed of bomb burgers. Add this to the list. 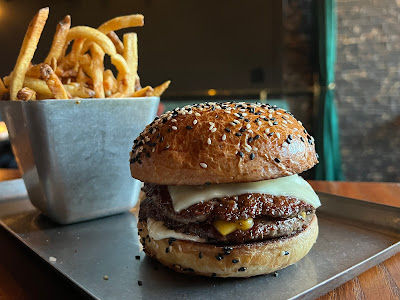