My original plan for today's post was to make a couple more visits to Chicago's only Cameroonian restaurant. But then I was told by the owner he's not sure how much longer they're going to be around. It opened in 2020 during the height of covid and it's been a struggle to catch up. But he never said they were closing for good so it's tough to gauge. I just know now's the time to go so I'm posting about it in hopes of encouraging others to check out the cuisine of this West Central African nation. 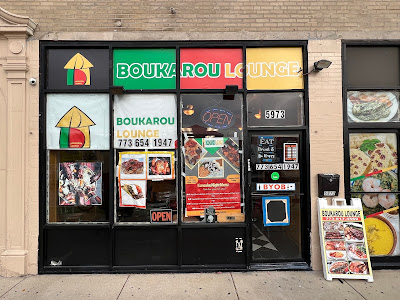 Locals Favorite in Edgewater
According to the owner of Boukarou Lounge there's a nice sized Cameroonian population in the Chicagoland area. I’ve never had Cameroonian food prior to this but I'm a big fan after having their soya. In fact you’ll find it on all of my ‘Best of 2022’ lists. Soya is what Cameroonians call skewered meat (it's called Suya in Nigeria). Boukaroo Lounge makes theirs with some aggressively seasoned chunks of beef charred up and served alongside fried plantains and raw onions with mayo and a mix of spices from Cameroon that are used for dipping with the two skewers that come with it. A side of fluffy jollof rice and some bobolo (fermented cassava) made it a complete meal for two and an excellent one it was. Just be ready for some real heat, it had a big presence in everything we ate. The peanut sauce served with the bobolo reaches fire extinguisher status. Friday is karaoke night and the menu is a bit different so I'm looking forward to returning for some other traditional Cameroonian offerings and reporting on them but I wanted to get the word out now in hopes that it can help. 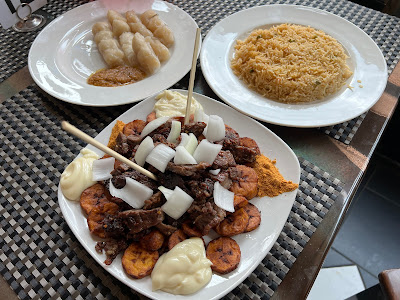