If you were unaware that Red Light Chicken exists that’s bc they’re not trying to get your attention on Instagram or Tock. It’s a low key spot (no phone) in a not so low key neighborhood, the DePaul area of Lincoln Park. The only reason I knew about Red Light Chicken is bc it’s on Sheffield in the space where Devil Dawg’s first opened. The name brand hot dog stand lasted about ten years before deciding to close that location and focus on the others that opened after it. The building is a small space making it a good homebase for something of the fast and casual variety. Something like fried chicken sandwiches which these days are as much a part of the American diet as the cheeseburger. There’s never a time when these fried chicken sandwich shops are not opening so at first I thought “great another fried chicken sandwich spot.” 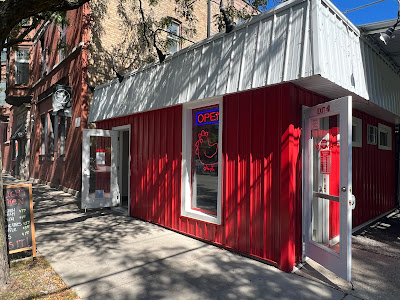 As time went by I often passed Red Light without the taste for a fried chicken sandwich, it’s just not something I crave often. But when the taste for one came calling I knew where to go. The menu is as simple as it gets. They have sandwiches, some nuggets, and the option to add fries, that’s it. The sandwiches can be ordered in a few different ways but I was there for a classic fried chicken sandwich and that’s exactly what I got. Nothing out of the ordinary here. Just a really well made sandwich that takes full advantage of a crisp piece of juicy chicken meat dressed with pickles and mayo plus cheese if you want it. The thinner than normal fries are frozen but fry up nicely. Ask for a side of house-made spicy mayo to use for dipping. I don’t know if it’s possible for a chicken sandwich to be life changing but they can certainly hit the spot and next time I want one I know where I’m going. 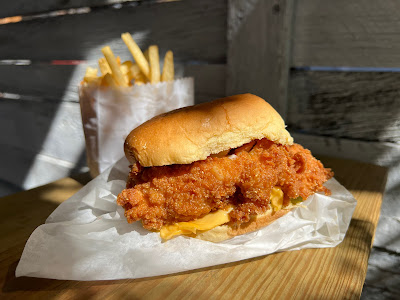 It’s not a thigh it’s a breast.

Seriously no B.S. but this little gem pumps out the BEST chicken sandwich in the city!!

How does it compare to Budlong