-Grubbing in Chicago
Iconic Barbecue on the South Side

Hard to believe but I've never documented the Chicago style bbq at Lem's on 75th street. Chicago style bbq just doesn't get the national attention of the food world which is hard to do when the style doesn't even exist on the city's North Side. Thus there's many Chicagoans who will never know the joy of gnawing at a rib tip or dipping a hot link in some smooth tasting sauce. But for those of us who've visited Lem's it's something we cant pass on when the opportunity arises. That was the case for me recently when I attended a graduation party in the area and couldn't resist stopping for some tips and links upon smelling the smoke that the signature aquarium smoker was releasing into the air. 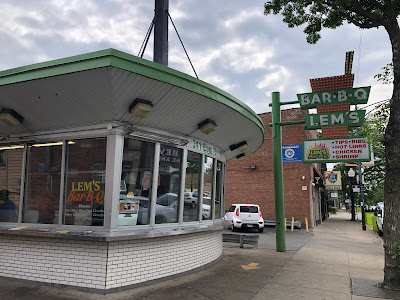 Locals Favorite in Greater Grand Crossing
This landmark location of Lem's was built in 1968 and today it's the only location left standing. The restaurant and brand itself dates back to 1954. It's still in the same family for which it's name is short for - Lemons. Despite the previous calendar year that was as tough as any Lem's remains as good as ever. They were actually able to adapt to corona restrictions pretty easy due to the fact it's takeout only and there's little room inside, just three people are allowed in at a time. Lem's biggest problem has always been having enough bbq for their customers as they still smoke with real wood and it's a slow cooking process. But on my visit I only had to wait maybe 15 minutes max for what's always my standard order at a Black owned barbecue shop on Chicago's South or West sides -  a combo of rib tips and hot links with sauce on the side. These two items along with ribs smoked in an aquarium style smoker are are what make Chicago Barbecue a thing all it's own. Barbecue is one of those foods that when you smell it makes you want some immediately. When I'm in Chicago, which is most of the time, the smell of smoking meat immediately triggers the itch for tips and links and Lem's smokes some of the best in the city. In a town with lots of dining icons it's one of the most iconic. 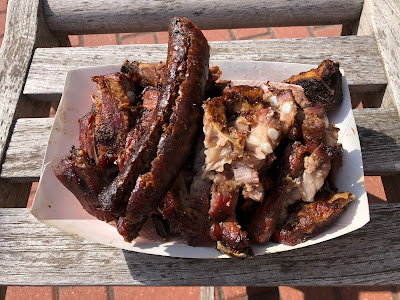