-Grubbing in Chicagoland
New to the 'Scene'

One of the most talked about restaurants among Chicago food people right now isn't in Logan Square or the West Loop or even Hyde Park, it's in Berwyn and it's a barbecue setup through a partnership between Chicago Chef John Manion and the owner of FitzGerald's. The latter of which is a Berwyn bar with a large outdoor patio and a stage for musicians to perform. I paid a visit just last night and arrived to a patio that was about 95% full. There was a really nice energy in the air as live music was being played while people ate, drank, and enjoyed a perfect summer night. We were seated pretty quickly as it was just me and a friend who joined me for some brisket and brews out in Berwyn. 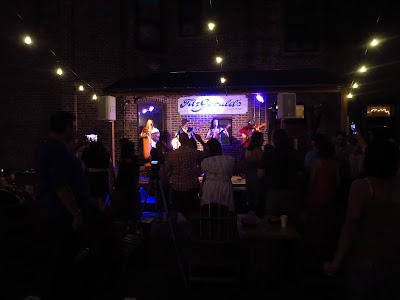 Locals Favorite in Berwyn
We started out the night with a couple of their exclusive Babygold Cold Beer which is pilsner brewed by a local brewery. It's served in 16 ounce cans so thumbs up to that. The guy behind the food at Babygold, Chef John Manion, runs El Che Steakhouse & Bar located on Washington and he has a butcher shop called El Che Meat & Provisions that he runs from there. So he's well versed in the grilling of meats and is now attempting to become a master at smoking them too. The menu isn't the typical served by the pound style and instead the meat comes served as a plate or a platter. There's a nice selection of appetizers as well as sandwiches and we may have ordered a little too much but that's ok bc we got to try a decent amount and figure out what some of the standout items are. The smoked whitefish salad may or may not be one of them. I'm still undecided but it was definitely a bit on the wetter side compared to some other versions I've recently ate. There was probably a little too much mayo but there also wasn't anything left when our waiter came to clear the plates. Served with a side of saltines which I appreciated bc they usually work perfect with a cold fish dish like this. 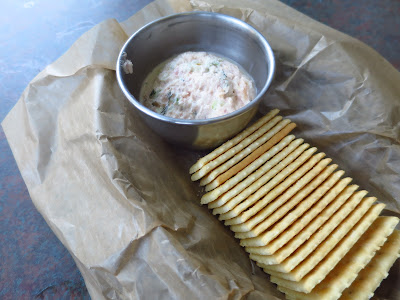 Smoked Whitefish Dip at Babygold Barbecue
I was very intrigued with the Po Boys even though I know that the consumption of them outside of New Orleans usually results in an unsatisfying product. What caught my eye was the brisket debris option which comes the traditional way so that's good but I knew much of my opinion on it would be made based on the bread and it wasn't to my liking. Too soft and not quite right. The brisket debris tasted pretty plain to me too. Not sure if it was smoked or came from the bottom of a pan loaded with drippings but it didn't taste that way to me. I thought the sandwich was ok but I wouldn't get it again. 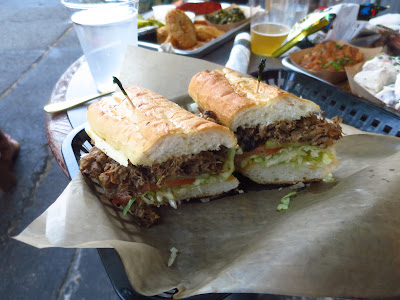 Brisket Debris Po Boy at Babygold Barbecue
Ok so lets talk barbecue! It's what David Chang calls the future of dining out. He thinks that in the way people went to steakhouses and such for special nights out will soon be how the masses consume barbecue. I'm kind of in agreement in that the cost of going out for barbecue these days isn't all that much cheaper than going to a steakhouse or even sushi. When Central Texas barbecue became thee barbecue among food media and foodies alike it skyrocketed in popularity and with that beef prices have risen. Since brisket is usually front and center with Central Texas style you usually get brisket if and you're going to pay a premium for it when you do. Especially considering most spots like this understand the importance of using quality beef so long explanation short - beef just isn't that cheap anymore. It's expensive actually compared to the other options like chicken and pork. My whole point is that when you go out for barbecue in this style you're going to drop some money so it's kind of become similar to going out for steak. It's for a special meal. That sets the quality expectations very high and the truth is there's lots of bad bbq out there. The good news is that's not the case here. 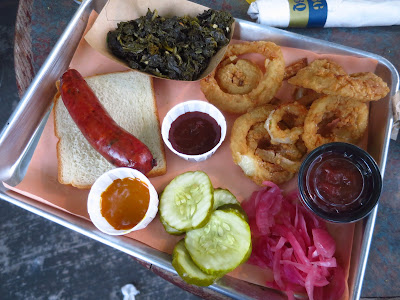 Smoked Jalapeno / Cheddar Link Platter with onion rings and braised greens
We ended up trying a combo plate that paired brisket (ordered sliced / fatty) with the ribs plus a platter of the sausage link which we paired with the waiter recommended onion rings and some braised greens. Pretty good at least the sausage and onion rings anyway. I appreciated the pickles and pickled red onion as you have to serve those on the side if serving this style of barbecue. The ribs which get a saucing pre-trip to the grill (they're smoked before that) were the best of the smoked meats we tried. I enjoyed the smoke flavor they had as well as the grilling of them with sauce bc it gives them another layer of flavor that's different from dipping the meat into a side of sauce. I don't order brisket outside of Texas and expect to get the good stuff save for a few special instances but this wasn't one of them. I wasn't expecting a guy that decided he's going to do bbq for a business model to be able to put put a smoked brisket similar to those in Texas smoked by lifetime pitmasters. Still it was better than alot of brisket I've had. There's tons of bad brisket out there and you'll realize this if you ever try the signature stuff served at some spots in Texas. This wasn't quite that. It could've used more smoke flavor and better texture but I still ate it all and enjoyed it for what it was which was decent brisket for outside the Lone Star State. I would've liked to see Manion build a menu mixing some of his Argentinean cooking with Texas style barbecue. The sides were all just ok. The onion rings the best of a mediocre bunch that included potato salad, beans, and greens. It all suffered a bit too from being served at room temp. But the thing with barbecue is you get much better the more you make so lots of barbecue spots get better over time. If that's the case here they'll have a setup that cant be beat locally in the warmer months. I look forward to a return trip later this summer. 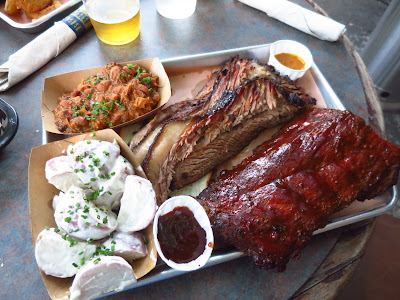 Brisket and Ribs and Babygold Barbecue