The 2500 block of North Milwaukee where the Megamall once rested has seen some major development / gentrification. But change is always imminent and in some cases it isn't as celebrated as others and rightfully so. I don't think the neighborhood needed a Target though for some instances it's easier that it is there. One thing the neighborhood definitely didn't need was a Qdoba or Chipotle type setup. Something so corporate it's traded on the Nasdaq. So I consider the addition of KFire Korean BBQ a win. Not just bc it's not a Jimmy John's but also bc it's a great neighborhood place. People are living in those brand new overpriced apartments they built whether people like it or not. So somebody might as well make a living off their presence and in the case of KFire it's a team of two local Chicagoan's, both of Asian descent, who are bringing fast casual Korean BBQ to the area. 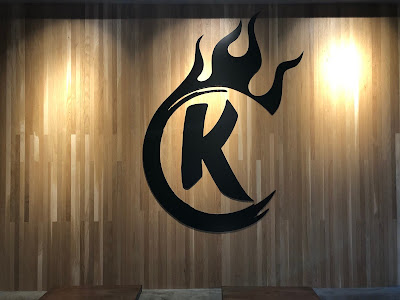 KFire actually opened last summer but it took me almost a year to finally try it. Timing and remembering it was there were the only things that kept me from doing so bc I liked the idea of being able to get a plate of fresh grilled Korean style bbq without having to dine-in with a group of people. While the setup is similar to Chipotle in how you order the food is actually very good, and it's not just a choose your meat and toppings type menu. There's some interesting stuff like the KFire Balls which are described on the menu as "a risotto inspired kimchi fried rice ball. Breaded and stuffed with spam and cheese. Served with a tonkatsu mayo sauce." Fried fresh to order these are a terrific treat. 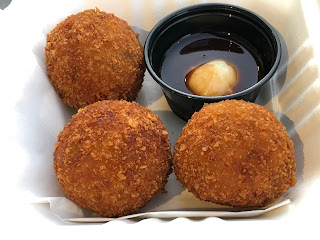 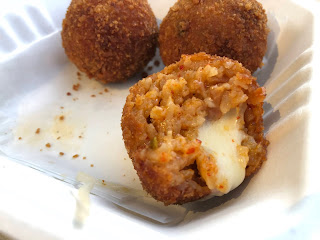 KFire Rice Balls
KFire gives the customer the choice to personalize their meal starting with your entrée of choice. Korean favorites like Kalbi are done traditionally while their signature spicy chicken starts off as a marinated skewer that's grilled to order. All meats are grilled to order so you can expect a 5-10 minute wait which in my opinion is well worth it. Nothing sits and steams waiting for someone to order it here. Your entrée wont be cooked until after our order has been placed. You also get the choice of two sides from a selection that includes kimchi, marinated mushrooms, corn salad, and more. White rice and a fresh and crisp green onion salad come standard with each plate. I liked the look of the pork belly which in pictures seemed like it was cooked crisp and they do so by taking two long pre-cooked pieces from the fridge and grilling them on all four sides before chopping it down into bite size pieces and saucing it up with a sweet wine miso. At $14 a plate it's a bit pricier than a place like Panda Express but you get what you pay for which is a filling bowl of fresh made food that has more of a home cooked feel than work lunch filler. I'll be back as it's the type of spot I want in my neighborhood. 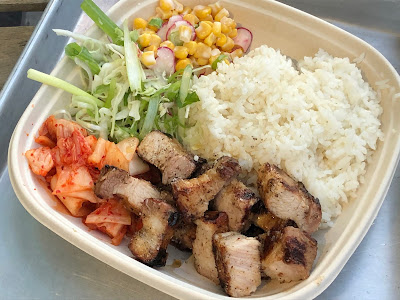