Out by O'Hare there seems to be an abundance of late night diners. Places open around the clock. Spots where you can get some pancakes and a burger as well as $10 in scratch off tickets after your shift at the airport. One of them is a spot that's pretty much always open on Lake street. It's called Johnnie's Grill and it 100% looks like a blast from the past both on the outside and inside. 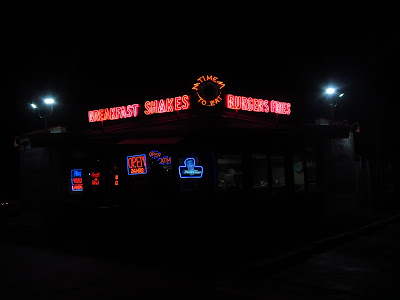 While there's no history lesson of Johnnie's Grill to be found online there's plenty of history inside the place. It's a time capsule back to when this area was a hotbed for everything from shipping to dope dealing. There's no denying this area is one of the seedier stops in Chicagoland. Johnnie's Grill is definitely a stop for some of the areas major players. Especially late into the night. If you're just riding by and it's dark Johnnie's will catch your eye right away with it's neon advertising burgers and shakes. It promises breakfast and fries too. All of these things are what's popular on the menu here. 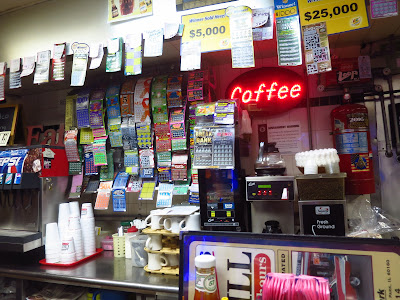 Some people just like to stop inside for some coffee and maybe a scratch off ticket. Some don't give their money to anyone but the slot machines that are lined up against one of the walls. But for the most part Johnnie's is where locals go when they want something for breakfast or burgers be it 10am or 10pm. Johnnie's is always an option out in these parts. The steak fajita breakfast platter is the item that those in the know will tell you to get. They take a 1/2 lb of skirt steak and chop it up amongst grilled peppers and onions. It's served with hash browns and eggs of your choice. A massive plate of food that hits the after hours spot. The burgers looked decent enough but this is one of those dishes you wont find everywhere. At about $15 it's one of the splurge options on a typical diner menu. 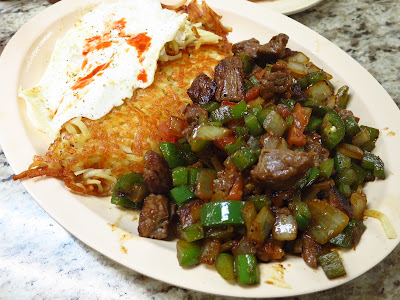